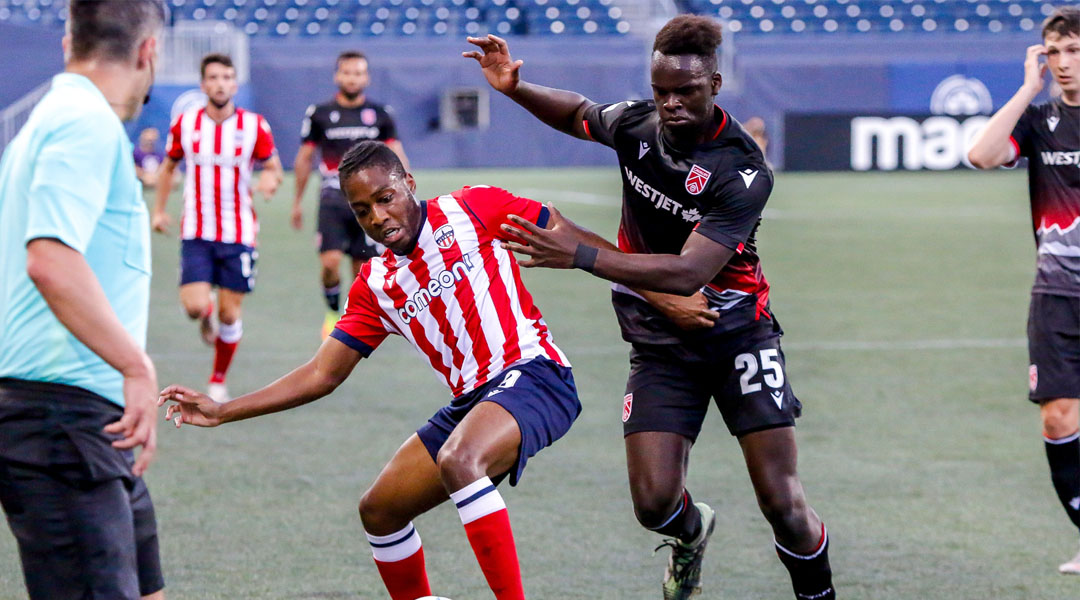 While last year saw Atletico Ottawa record its first-ever victory over Cavalry FC, it was Tommy Wheeldon Jr.’s side who tasted victory in the duo’s first meeting of 2021.

Atletico Ottawa knew it had a tough task ahead of it after entering the game without Ryan Telfer, who departed to join the Trinidad and Tobago national team. It also saw Viti Martinez on the bench after he picked up a knock against the Eddies.

Thus, both sides featured some rotation from their opening day wins over FC Edmonton and York United, respectively.

Here’s the match roster below:

Cavalry FC took an early lead by pressing high up against Ottawa goalkeeper Dylon Powley, with Cavalry man Ahinga Selemani, getting the better of Ottawa goalkeeper Powley to put his club in front after just eight minutes’ time.

The moment mirrors the way the team scored against York United a few days ago, with future Cavalry FC opponents likely taking notes about how to handle high presses from the Alberta-based club.

Still, the expansion side would answer back with an equalizer in the first half, with Miguel Acosta sending Shaw down the right flank as Acosta made a b-line for the box. Shaw then returned the ball to Acosta, who capped of an undetected run with a goal:

Things seemed to be settling down in the first half when a lofted ball in the Atletico Ottawa box saw Selemani turn and fire a quick near-post shot that got the best of Powley, with the first brace of the 2021 CPL season coming in the 43rd minute.

The second half saw Atletico Ottawa still eager to fight back, with Atletico Madrid Academy loanee Rafael Nunez sending a tantalizing ball across the face of the net that was just ahead of any boots hoping to put it beyond the line.

Substitute Elliot Simmons looked be in pole position to secure a third for Cavalry in the 68th minute, but his drive into the box was blocked at the last moment by Milovan Kapor.

The wave of Cavalry attacks paid off not long after that when twenty-year-old Calgary local Victor Loturi snuck onto the end of deflection in the box to seal a bad day at the office for Dylon Powley:

Things went from bad to worse for Atletico Ottawa just moments later, with Elliot Simmons finding himself completely unmarked on the right of the box to fire in Cavalry’s fourth:

With Simmons cementing his first-ever goal at the professional level, the 4-1 result also marks the first time Powley let in four goals in a single game.

With the biggest win of the season so far now wrapped up, Cavalry FC now finds top of the table on goal difference above Valour FC.

Tommy Wheeldon Jr.’s side will face off against the Halifax Wanderers this Saturday, with Atletico Ottawa facing off against Valour on the same day.