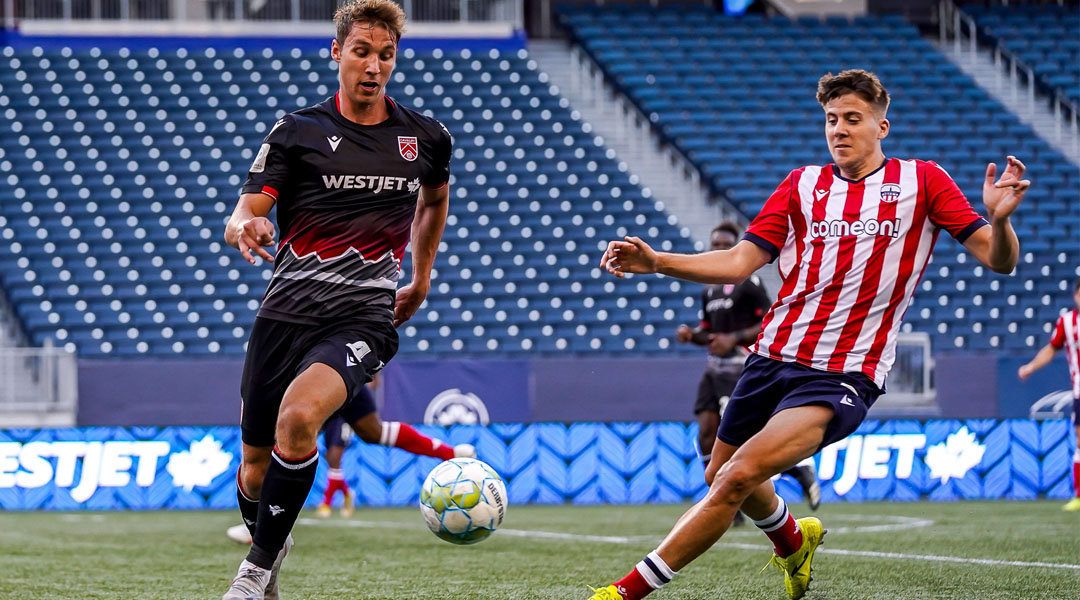 Second half goals from Atletico Ottawa’s Malcolm Shaw and Antoine Coupland were enough to see the Canadian Premier League side snap a three-game losing streak against the run of play at IG Field tonight.

A struck post from Richard Luca and an offside goal from Anthony Novak were as close as Cavalry FC came to scoring tonight, with the Alberta-based side instead collecting its second loss of the campaign.

While Atletico Ottawa head coach Mista had his fingers crossed that Alberto Soto would be available for tonight’s match, it wasn’t meant to be though the club finally saw some light amid a tough period in the bubble. Cavalry, meanwhile, gave a rest to some of its veteran athletes for the Sunday evening match.

Here’s how tonight’s lineups looked for both sides:

Having won their last meeting 4-1, it wasn’t ultimately too surprising to see Cavalry FC lay claim to the first two chances, though the opening thirty minutes didn’t see much action at either end.

Atletico Ottawa’s best chance of the first half came from a freekick opportunity from Ben McKendry, with veteran defender Drew Beckie completing a diving header that didn’t prove a problem for Carducci.

The side came out lucky not to have conceded from an absolute screamer from Richard Luca, with the Brazilian turning to make space for himself before firing a stellar effort that struck the left post after leaving Dyon Powley stranded.

Against the run of play, it was Atletico Ottawa who finally broke the deadlock fifteen minutes from time. Zach Verhoven broke through after a slip from Yao to slot in a sharp ball for Malcolm Shaw, with the striker firing in the chance:

This marks Shaw’s third goal in the Canadian Premier League, and his second against Cavalry FC after he helped secure his club’s first-ever win in dramatic fashion last year.

Teenage substitute Antoine Coupland nearly bagged an insurance goal five minutes from time, running free on the right flank but seeing his nutmeg attempt fail to slot in between the legs of Marco Carducci – with a wide-open Viti Martinez likely having been the best option instead.

Cavalry’s equalizer nearly came from Atletico Ottawa defender Milovan Kapor, who booted the ball off his own crossbar in an effort to stop an aerial ball from finding Anthony Novak.

The striker thought he found the equalizer in added time, with the former Forge striker firing home a close-range strike before receiving an offside call from assistant referee Michael Hood.

The sixth minute of added time saw Cavalry FC caught out as it pushed forward, with Viti Martinez finding himself on a breakaway before unselfishly setting up Antoine Coupland for his first-ever professional goal:

Referee Yusri Rudolf would then signal the end of play a few minutes later, securing a big statement win for Atletico Ottawa that sends the side up from eighth to fifth in the league table.

Cavalry FC will now face York United on Wednesday, with the club having just seen the arrival of Oliver Minatel and Joe Mason to the bubble earlier today. Meanwhile, Atletico Ottawa will seek to keep its winning ways rolling against Valour FC on Thursday.