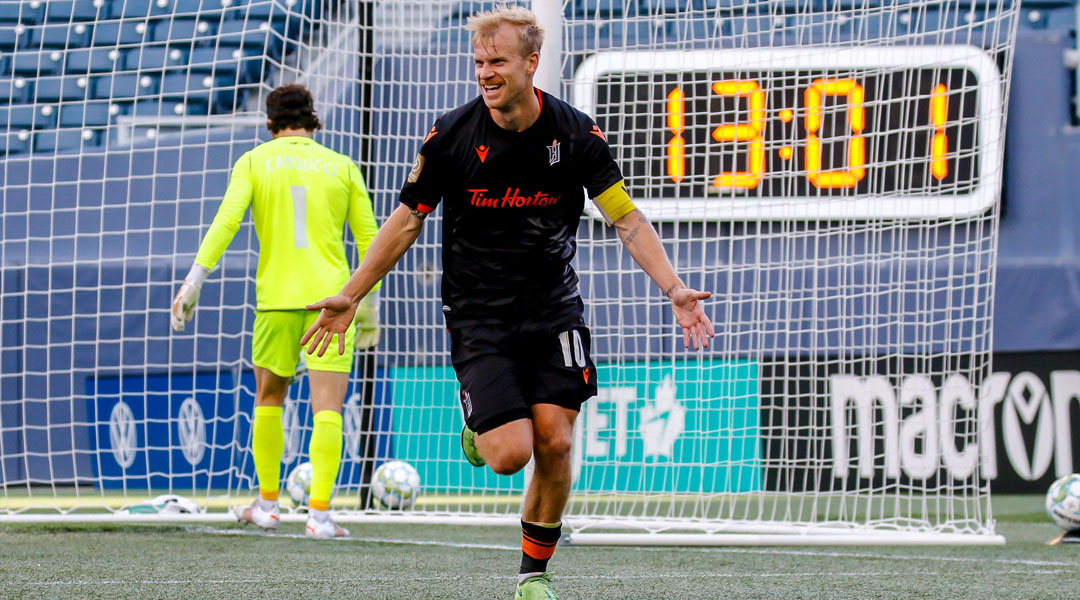 A brace from Forge Captain Kyle Bekker secured a crucial win for the reigning Canadian Premier League champions in a match that will sting Alberta-based rivals Cavalry FC, who suffered their first loss of the campaign.

The Hamilton-based side now rest three points off the top as the bubbled segment of the 2021 Canadian Premier League season reaches its halfway point.

Tonight’s matchup saw former Forge striker Anthony Novak line up against his former club following an offseason in Portugal, whilst the reigning league champions put forth a familiar 4-3-3 formation for the occasion.

It appeared that Garven Metusala may put Forge ahead early in just his second start for the side, with the youngster unexpectedly gaining possession after a set piece found its way to him – though he fired the ball high.

Forge FC Captain Kyle Bekker gave the hammers the lead in the 13th minute, sneaking unmarked into the box to fire home a cool volley before anyone could close him down, and finding himself on the scoreboard for the third straight season with the hammers:

Escalante then looked to have sent Joseph Di Chiara into space in the 25th minute, but Forge’s Triston Henry got to the ball first. The duo collided in the box, with Di Chiara deemed at fault and handed an admittingly harsh yellow.

Escalante continued to look dangerous, finding himself with enough space to fire off a hopeful effort that wasn’t too far away from an equalizer about seven minutes later.

It was Bekker who’d be back for more before the second half came to a close, capitalizing on a mistake from Mason Trafford to advance in on Carducci before blasting a rocket into the right side of the net for the second brace of his career:

Tommy Wheeldon Jr. handed former Valour man Ali Musse his debut to start the second half, with the 25-year-old replacing Joseph Di Chiara. While Loturi forced Henry into his first save at the 49 minute mark, the chances were few and few between for the Alberta-based side.

The next best opportunity came 15 minutes from time, with Brazilian substitute Richard Luca tearing down from the left side of the box but ultimately falling just short of getting the ball cleanly to Ahinga Selemani.

It’s clear that Tommy Wheeldon Jr. had his side pushing bodies forward late in the game, with Calgarian youngster Daniel Kaiser unlucky to find a close-range shot blocked by Dominic Samuel in the final minute of regular time.

By the time referee Alain Rush signaled the end of the Canadian Premier League’s 150th match, it was the reigning CPL champions who had secured victory over their Alberta-based rivals.

Forge now only has a few days to prepare to a potential table-topping clash with Valour FC on Saturday, with Cavalry taking on Atletico Ottawa later on that same day.