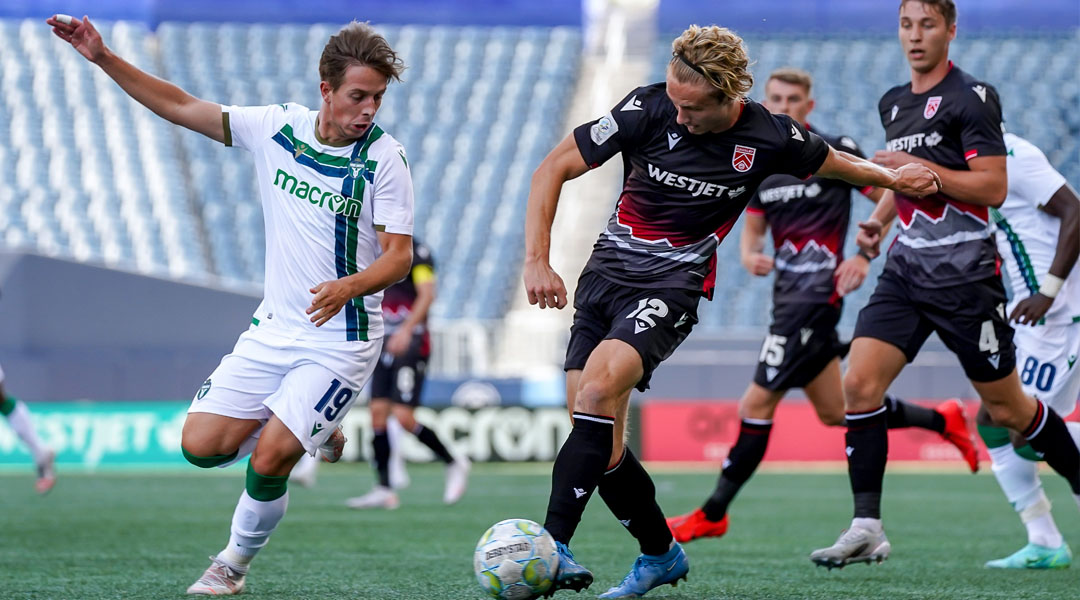 The action at IG Field saw Jose Escalante and Diyaeddine Abzi put in a highlight performances, with familiar notes haunting a rebranded Nine Stripes side which struggled to convert opportunities from open play and refrain from game-changing individual errors.

Still, the Nine Stripes had a somewhat resurgent second half, though it wasn’t enough to undue the damage that had already been laid out by Calvary FC.

Both sides had undergone plenty of changes in the offseason, with several fresh faces now being introduced by both clubs and Dominick Zator getting the start against his former team.

The match started with York United seemingly on the front foot, though it was former Forge striker Anthony Novak who came closest to scoring the opening goal for Cavalry with a close range header that Ingham was able to stifle.

The Nine Stripes fired back in the twentieth minute, with Michael Petrasso – who proved dangerous over in England this offseason – looking like a strong threat on the right wing.

Moments later, a dangerous ball across the box from Ferrari went just behind a run from Abzi. The pressure from Jim Brennan’s side didn’t relent after that, with Abzi soon carving space away from rookie Daniel Kaiser to fire in a tight shot that Carducci was able to get gloves on.

After missing out on The Island Games, Cavalry FC winger Jose Escalante nearly announced his return in big fashion, with the Honduran winger sneaking beyond Terique Mohammed to fire a close range effort that Ingham rebounded out.

The deadlock was broken by Cavalry FC in the 32nd minute, with Escalante firing a great cross into the box that was well met by a diving header from Sergio Camargo:

The start of the second half saw Camargo replaced by Mohamed Farsi, who had laid claim to last year’s Best Canadian U-21 Player award after a stellar rookie season.

Individual errors had plagued York United last year, and that theme came back to haunt the team before it could build up momentum in the second half: the side went to play out of the back, with newly-minted captain Roger Thompson suddenly seeing his pass blocked by a sneaky run from Escalante.

To the horror of Nine Stripes fans, the ball cannoned off the Honduran and beyond Ingham into the back of the net, completing what can only be described as a self-inflicted wound by York United.

The Nine Stripes didn’t let the circumstances get to them, with Diyaeddine Abzi providing several bright sparks as the side fought to pull one back after the error – though he appeared to be the only moment-maker coming from the side.

To keep control of the game, Wheeldon Jr. then brought on Joseph Di Chiara on against his former team, with the move having been referenced in a recent musical release by Elijah Adekugbe.

Abzi’s workrate led to two penalty shouts for Jim Brennan’s side, with the winger first being taken down at the edge of the pitch, and later turning provider for Petrasso before the latter collided with Farsi – though referee Juan Marquez didn’t point to the spot for either occasion.

The second half saw Escalante and Abzi continue to highlight, with York United struggling to create any shooting opportunities from open play, while Ingham was called in to action a few times.

A freekick opportunity outside of the box was predictably handed to Abzi, who fired in an excellent shot to cap off a fantastic individual performance:

York United then nearly found itself a lifeline when Carducci was caught well out of position in the left side of the box, with a lobbed effort from Abzi nearly securing a shock equalizer for the side.

Still, the final whistle would soon confirm the win for Cavalry, with the opening weekend closing without any matches ending in a draw.

York United will need to address some concerns ahead of its Canada Day match against Pacific FC, though the fact that the team had a significantly limited preseason likely had a factor in tonight’s performance, with Abzi being an absolute highlight for the side.

With tonight’s job done, Cavalry FC will now get a short rest before squaring off against Atletico Ottawa on Wednesday.

Board Games, Cupsets, And Drive: A Look At Hunter Gorskie’s Path To FC Edmonton