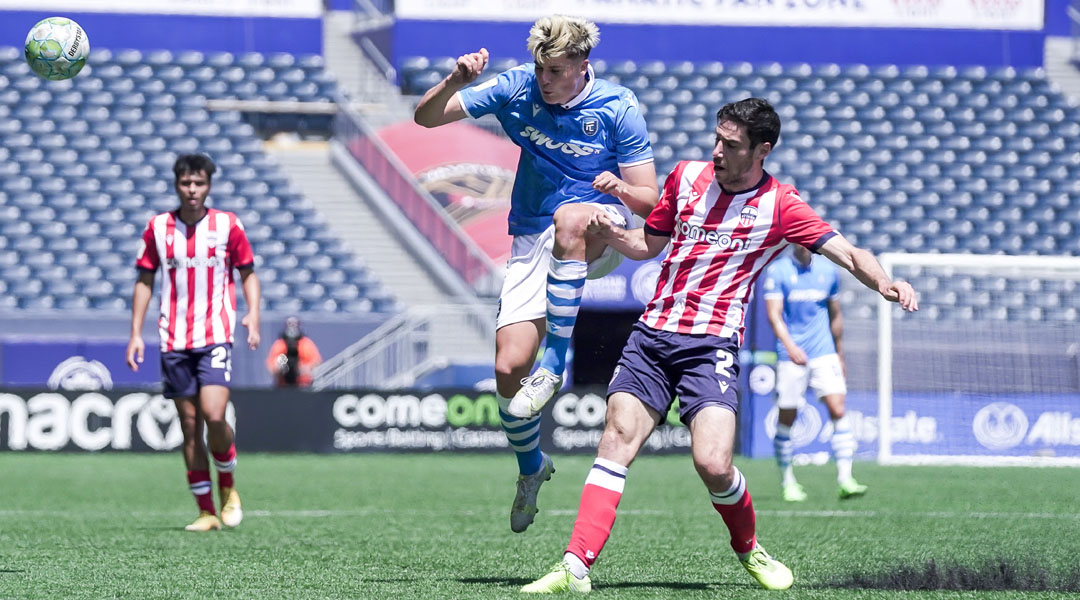 The opening match of the 2021 Canadian Premier League season was a tight affair between FC Edmonton and Atletico Ottawa, with the match seeing a first half goal for the Eddies called back by a debatable offside decision before Atletico Ottawa snatched all three points at the tail end of the game.

After a land blessing and acknowledgement by Niigaan Sinclair and Elder Florence Paynter, the 2021 CPL season got underway with two sides who fought to a dramatic 2-2 draw last year – so it wasn’t exactly a surprise that it was another tight affair between the two.

A retooled Atletico Ottawa side would see Dylon Powley get the nod against his former team, with head coach Mista deploying a 4-3-3. The backline saw Vashon Neufville resume the left-back post, with Drew Beckie and Milovan Kapor in the middle, and Spanish full-back Miguel Acosta on the right. A midfield trio of Ben McKendry, Viti Martinez, and Chris Mannella fed the ball to a front three of Ryan Telfer, Malcolm Shaw, and Rafael Nunez.

Meanwhile, new Eddies head coach Alan Koch fielded seven new faces from the get-go, with Connor James behind a back four consisting of Jeannot Esua, Amer Didic, Hunter Gorskie, and Sharly Mabussi with Ramon Soria being deployed as a defensive midfielder. In front of him was Thomas Gardner, Shamit Shome, Paris Gee, and Fraser Aird (who switched positions with Esua frequently), with German striker Tobias Warschewski getting the start ahead of Easton Ongaro.

The match opened with both sides enjoying some good passages of play, with perhaps the best opportunity of the opening fifteen minutes see Jeannot Esua fire just over the bar from the edge of the box.

The Eddies then had a go-ahead goal called back – on a set piece, no less – with Tobias Warschewski firing a rocket of a freekick, collecting his own rebound, and firing it beyond Powley in the 24th minute. Unfortunately for the Eddies, it was all for naught with a debatable offside call.

In the 28th minute, Eddies Captain Ramon Soria then became the first player of the season to collect a yellow card for coming in hard on Atletico Madrid loanee Rafael Nunez.

A fantastic solo run from former York United winger Ryan Telfer saw him advance beyond two defenders to fire a shot that went just side of the post just one minute later. The Trinidad and Tobago international would also feed a good ball in to Malcom Shaw a few minutes later, though it was just a bit too high for the striker to head home.

The end of the second half saw the Eddies assistant coach Jay Bhindi handed a yellow card by referee Alain Ruch, perhaps the first time a coach has done so in his first CPL match.

The second half saw an awkward bounce lead to some confusion with the Eddies backline, though the Alberta-based team came out whole despite James being caught out of net. Viti Martinez would do well to get beyond a defender shortly after, with his cross nearly carving out a volley opportunity for Malcolm Shaw.

Substitutes Roberto Avilo and Easton Ongaro combined well immediately after coming on in the 63rd minute, and they really should have scored: Avila played in a perfect short ball for Ongaro, with Powley saving the resulting tap-in from just a foot away to keep the scores level.

A second Eddies defender would pick up a yellow moments later, with FC Edmonton’s Amer Didic going into the book for a challenge on Shaw – who, upon the restart of play, fired an arching shot just high of the net.

Mista then brought on a triple change, with Zach Verhoven, Keesean Ferdinand, and Bright Wright making their debuts and Ryan Telfer, Milovan Kapor, and Malcom Shaw coming off.

In what may be a worrying precedent for the Eddies, Esua then became the third defender to go into the books for a studs-up challenge on Vashon Neufville. Referee Alain Ruch then handed Atletico Ottawa its first card of the season, with Lawson going into the books not long afterwards.

Against what seemed to be the run of play, Atletico Ottawa then broke through with just under ten minutes to go. Shawn-Claud Lawson did well to make space on the right flank, crossing in a ball that saw a chance go begging from Zach Verhoven. However, jubilation for the visitors come moments later when Viti Martinez fired home the failed Eddies clearance:

Martinez – who scored a crucial goal for the team last year – has now scored two goals in seven appearances for the expansion side. As one of the few players to find an offseason loan and enjoy a competitive preseason, he looked in fine form as he helped the expansion side in all areas of the pitch.

The Eddies responded by putting on some late pressure, with substitute Kyle Porter nearly finding space next to Keesean Ferdinand three minutes into added time – but it wasn’t to be. Despite FC Edmonton arguably controlling most of the match, the final whistle saw Atletico Ottawa collect all three points in the 2021 CPL opener.

That being said, fans of FC Edmonton can take plenty of positives from Alan Koch’s reformed Eddies side, who will consider themselves unlikely not to have earned at least a draw tonight.