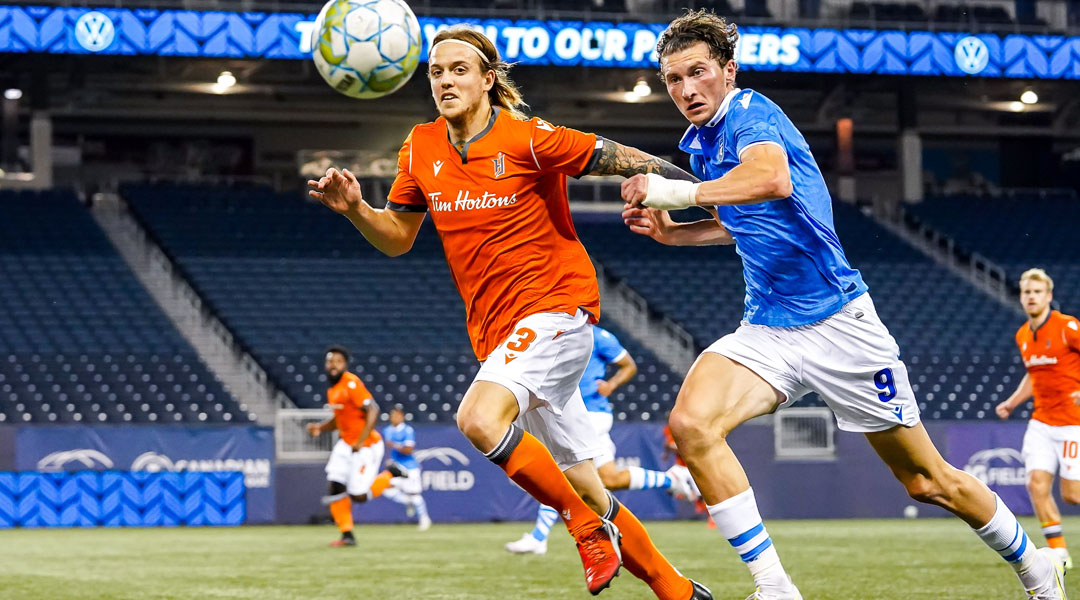 Forge FC returned to winning ways against FC Edmonton on Wednesday night, rising up to third place in the league table while cementing the Eddies’ spot at the bottom.

While FC Edmonton had secured a big victory over the reigning champions at the duo’s last meeting, this time around saw a penalty for Molham Babouli lock in a win for the hammer.

Here’s how the lineups looked for both sides tonight:

Eddies striker Easton Ongaro nearly put his side in front just over a minute into the match, doing well to hold off the Forge defense as he made space for himself and forced Triston Henry into an early save.

While the Eddies had the overall edge from the game’s opening fifteen, it was Forge midfielder Chris Nanco who claimed the best opportunity: the midfielder found himself with plenty of space, firing a shot that rifled off the crossbar and out.

Forge began to press well, causing more than one moment of chaos in the FC Edmonton box as a few chance bounces allowed the Alberta-based side to clear – though the tide was turning against them.

The hammer thought they were due for a penalty kick in the 28th minute, with Chris Nanco going down under a challenge from Mele Temguia in the box – though referee David Barrie was quick to wave away the protests.

The hammer would have another penalty shout go their way in the 38th minute, however, with Temguia called at fault this time around after a trailing arm was struck by the ball. Molham Babouli stepped up to take the shot, scoring his second of the campaign to vault Forge into the lead:

The hammer would come inches away from doubling the lead just before the half-time whistle, with Costa Rican loanee Josh Navarro sending a header just an inch or two high of the crossbar during his first start for the side.

The second half saw Babouli come close to his brace on more than one occasion, with one long distance shot firing just wide and a short on-target effort being saved by Connor James.

The final fifteen minutes saw Bobby Smyrniotis bring on two big reinforcements for the side, with Maxim Tissot and Tristan Borges both fit enough to join in on the action.

Despite a penalty shout from Eddies substitute Tobias Warschewski two minutes from time, there would be no further additions to the scoreline – with Eddies head coach Alan Koch even getting a yellow for his complaints for the no-call penalty decision.

Forge FC will be back in action this Saturday against Pacific FC, while FC Edmonton will have an extra day of rest before taking on Atletico Ottawa.

The next time these two sides will meet will be in mid-September at Clarke Stadium, with clubs set to return to home markets at the end of the month.