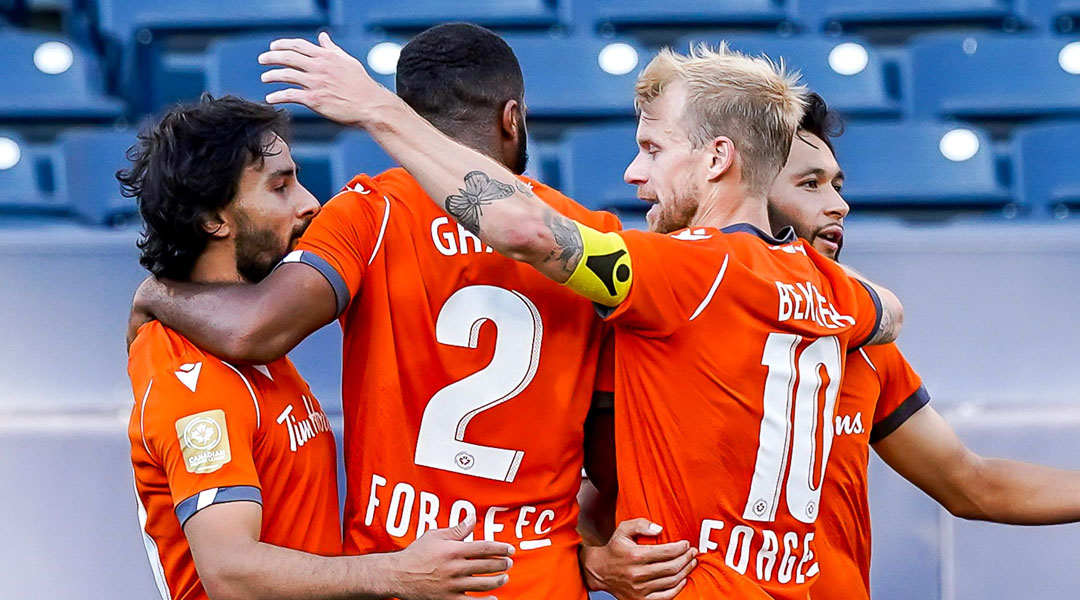 A thrilling second half followed a quiet opening at IG Field to see Forge FC claim its first points of the 2021 Canadian Premier League campaign, with goals from Babouli, Nanco, and Borges securing a big victory for the reigning champions over Pacific FC.

Forge FC star Tristan Borges had actually started on the bench after a quiet return with the reigning champions, while Pacific FC made the unsurprising decision to keep Josh Heard in the starting eleven following a stellar performance against York United midweek:

The first half saw both sides struggle to get into the final third, with a midfield battle seeing the likes of Josh Heard and David Choiniere look perhaps the most dangerous for either side.

Despite out-passing the reigning champions by a ratio of nearly two-to-one, the Tridents ended the first half with no shot attempts at all, with neither side recording a single shot on target in the first 45 minutes of action.

The second half offered a more promising start, with Pacific FC seeing an early chance from Josh Heard result in a Forge clearance that rebounded right back to Triston Henry, who held firm to stifle the play.

Alejandro Diaz then saw a golden opportunity pass him by, with the Mexican striker finding himself wide open in the box before sending the ball well above the net.

Both sides then looked to the bench to make changes as the game opened up, with the Tridents continuing to make the best of the pressure: the west coast side struck the post in the 69th minute, with Diaz blasting a just-off-target long ball that had Henry well-beaten.

Against the run of play, however, it was Forge who struck first blood: the club’s belated first goal of the season came through Mo Babouli, with the former Toronto FC striker collecting the ball in the box after a terrific interception from Bekker and a weighted pass from Choiniere to blast the ball near-post and beat Callum Irving:

Building off the momentum, the Hamilton-based side was quick to strike once again with substitute Chris Nanco bagging his first goal of the campaign after a combination play that involved all three substitutions from head coach Bobby Smyrniotis.

Nanco then won the hammers a penalty in the 80th minute, firing in a cross that struck the outstretched arm of Jordan Haynes. Up stepped Tristan Borges to take the penalty, with the Oud-Heverlee Leuven loanee sending his penalty into the back of the net to secure his 14th CPL goal and take the lead as the league’s all-time goalscorer.

Pacific FC will have felt hard-done by to see a strong start to the second half break down into to see three goals conceded in the span of ten minutes, with the Tridents failing to get any of its six shots to go on target.

With Forge FC finally collecting its first win of the 2021 CPL season, the squad will be riding a high ahead of a midweek match against Cavalry FC. Pacific FC, meanwhile, will face Atletico Ottawa on Wednesday.