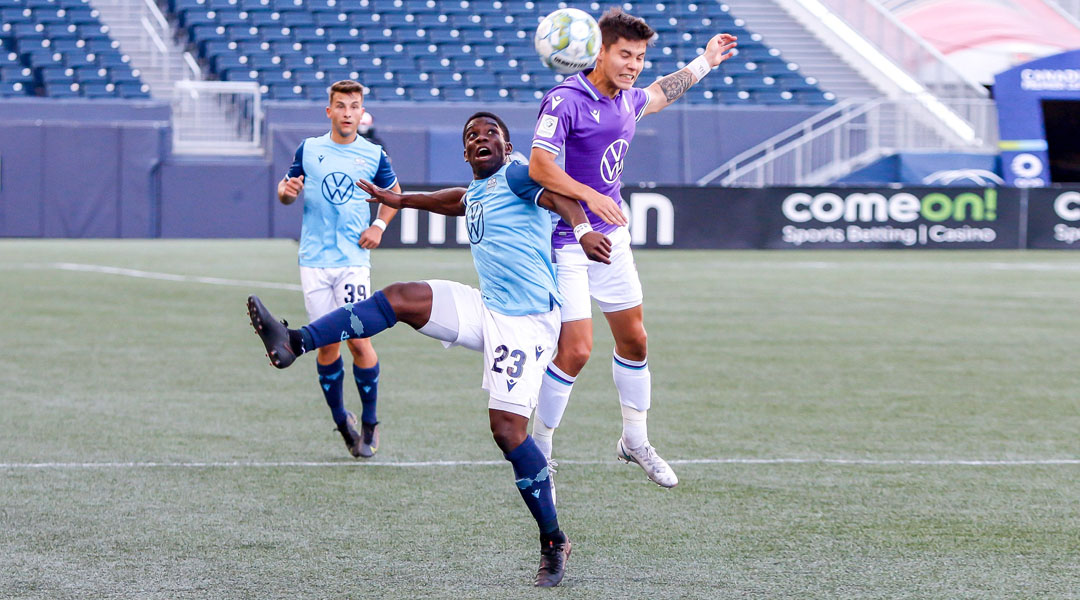 The crossbar kept all things equal in a coast-to-coast clash between Pacific FC and the Halifax Wanderers tonight.

After the first matchup between the two teams swung in favour of Pacific FC, it was the Halifax Wanderers who perhaps looked the better side in tonight’s midweek matchup – though neither side would find the net before the final whistle.

Both coastal sides saw rotation in their lineups, with the Wanderers handing Pierre Lamothe his first start of the campaign and both Polisi brothers finally getting the opportunity to play against one another.

Cory Bent almost got things off to a scintillating start with a long range freekick in just the second minute, with the English forward (and makeshift full-back) having also earned the set piece opportunity after forcing a foul on a darting run.

Just as Halifax fans are getting used to, full-back Morey Doner made space for himself on the right flank, doing well to deliver a ball that seemed to be put on a platter for Karajovanovic – though the resulting header will have disappointed both parties.

Pacific FC talisman Marco Bustos got west coast fans on the edge of their seats a few minutes later, burning Bent on the right wing before advancing on Sow in the box, though his final effort was blocked by an incoming wave of Wanderers defenders.

Karajovanic did well to force the game’s first save from Irving, using some flashy footwork to cut inside and away from MacNaughton before seeing his low shot saved by Callum Irving. At the other end of the pitch, Terran Campbell nearly opened up his campaign through a counter after a pinpoint pass from Josh Heard, but his shot rolled just wide of the far post.

Before the first half came to a close, Vancouver Isle native Sean Young – who saw a header fly high earlier in the match – picked up a knock, with Pa-Modou Kah erring on the side of caution and replacing him with Ollie Bassett in the 36th minute.

The second half should have seen the Halifax Wanderers score in the first few minutes, with Karajovonic turning supplier for Garcia after getting an edge on MacNaughton. With Irving caught out, the 2020 Golden Boot winner’s shot rebounded off a desperation block by Abdul Samake to ensure that Garcia remains scoreless in Winnipeg.

The Wanderers struck the crossbar in quite some fashion moments later, with Stefan Karajavonic firing an absolute rocket that went bardown but not beyond the line – though one feels the goal is coming for the youngster.

Bustos then called Christian Oxner into action on the other end of the pitch, firing a shot that seemed destined for the top right corner before Oxner tipped it over. Moments later, Ollie Bassett would do the exact same thing from a similar position, with Oxner once again making the save.

Later on, a defensive miscue from Lamothe saw Ollie Bassett in a one-on-one against Christian Oxner, who came out bravely to smother the opportunity. The 24-year-old currently leads the league in saves this season.

In a nice sight for Wanderers fans, forward Alessandro Riggi came off the bench for the final twelve minutes of the match, marking his first appearance for the side this season.

Still, there wouldn’t be any last-gasp drama for either team, with referee Alain Ruch signaling the end of a hard-fought scoreless draw after four minutes of added time. with Marco Bustos having been kept relatively quiet.

The draw sees neither side change position in the league table, with Pacific FC remaining in second and the Halifax Wanderers in seventh.

Both clubs will be back in action this weekend, with the league slightly shuffling a few fixtures due to an ongoing heat warning.