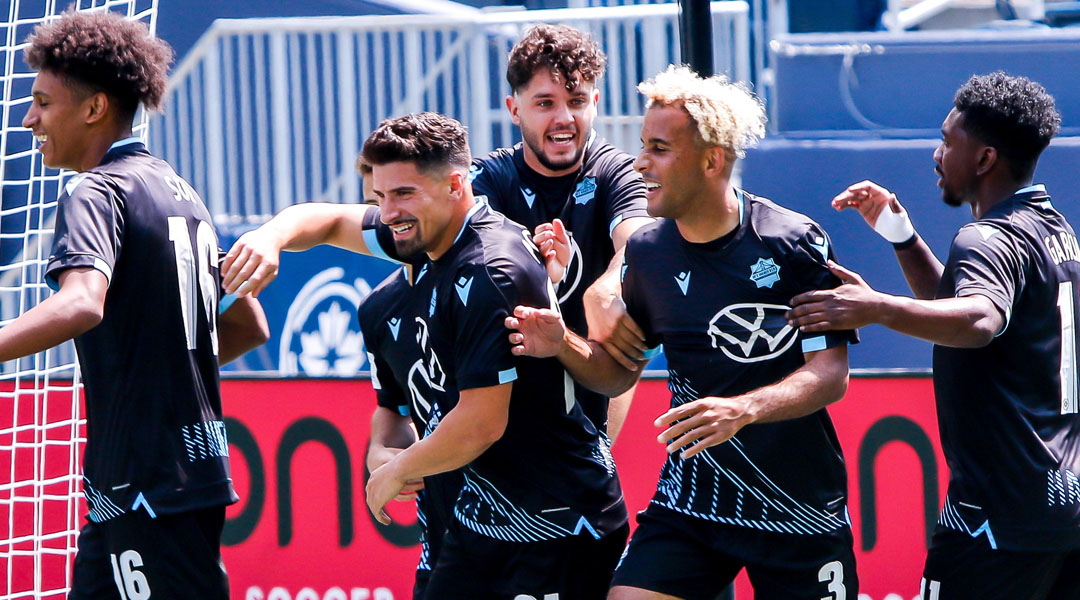 A brace from Joao Morelli saw the Halifax Wanderers collect their first win of the 2021 CPL season, leapfrogging FC Edmonton in league standings as the side secured a 2-1 win in Winnipeg, Manitoba.

The Eddies didn’t go down without a fight, with Fraser Aird pulling one back for the Alberta-based side before a goal-line clearance from Cory Bent stopped the side from clawing back a point.

The Halifax Wanderers put forth a strong message of playing ‘For Harty’ tonight, with interim head coach Mesut Mert in charge of the side whilst head coach Stephen Hartundergoes a minor medical procedure back in Halifax.

Here’s how both squads lined up:

The Halifax Wanderers went ahead early via a move started by Morey Doner, who kept play alive with a smart diving header, got the ball back, and then tore down the right flank to deliver a sharp ball across the box for Joao Morelli to finish.

While the first few chances would go the way of the Wanderers, the Eddies would see a few opportunities of their own, particularly with Fraser Aird – who scored a stunner last week – and Jeannot Esua looking sharp on the right wing.

The Wanderers would see the woodwork stop the east coast side from securing a second goal, with a corner kick from Morelli meeting the head of Garcia before striking the post and going out of play.

Doner continued to look dangerous throughout the first half, doing well to keep the ball in his own half before getting the better of two Eddies through an end-to-end run that saw his cross result in a missed shot from the Stefan Karajovanic, who had forced a save from Connor James minutes earlier.

The first half would close out with James making a strong save against a curling effort from Akeem Garcia, though the play was deemed to have been offside regardless.

The second half would see young FC Edmonton midfielder Thomas Gardner collect an aerial ball after finding himself unmarked in the box, but he wasn’t able to control it to create a potential equalizing opportunity.

The Alberta-based side would rue the missed chance just seconds later, with Brazilian midfielder Joao Morelli advancing into the box at the oether end before getting the best of both Didic and Gorskie to strike a right-effort effort which Connor James could only parry into the crossbar and in:

Morelli now has six goals in thirteen appearances for the east coast side, with today’s brace bringing his tally against the Eddies to four.

FC Edmonton then struck back with a well-teed up goal for Fraser Aird, who played a sharp one-two to set himself up with good run up just outside the box before blasting in his second of the campaign:

The Eddies continued to push in the second half, with Wanderers goalkeeper Christian Oxner finding himself beaten in the 80th minute before impromptu-left-back Cory Bent came up big with a goal-line clearance to maintain Halifax’s lead.

Former York United midfielder Kyle Porter nearly made the mounting pressure pay seconds later, firing a shot that appeared to have Oxner beat before it went just wide of the post. The midfielder had a chance of redemption with a freekick in two minutes from time, though the wall did its job to block the set piece.

The Wanderers nearly answered back as six minutes of added time began, with Garcia finding himself with time in the box before dribbling away the opportunity.

Despite a shaky end for Halifax, the Eddies couldn’t undo the damage caused by a first half brace from Joao Morelli, falling to a 2-1 defeat on the night.

After opening up its campaign to two losses, the Halifax Wanderers now have four points from their last two matches, now facing a coast-to-coast clash against Pacific FC this Tuesday.

Koch’s perennial underdogs will face reigning champions Forge FC for the second time, though they’ll likely be buoyed by the fact that their first win of the campaign came against the Hamilton-based side.