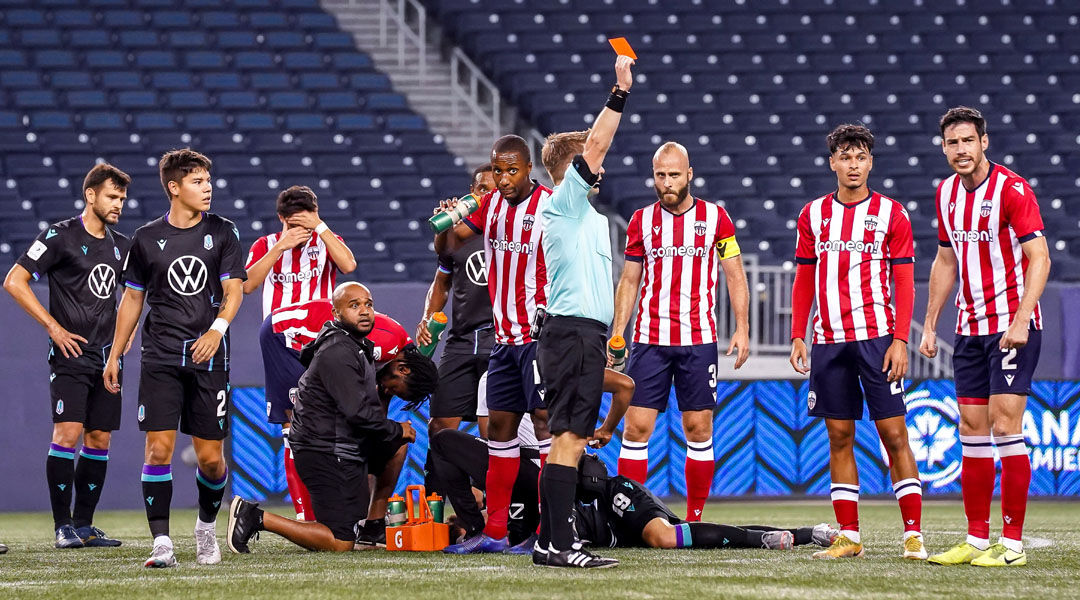 The Canadian Premier League may have just seen its wildest game last night.

That’s not to see the third-year domestic league hasn’t seen a fair share of wild ones: there was the time a nine-man Cavalry FC nearly beat York9 FC (now York United), a 6-2 affair between York and Halifax, and that memorable 8-0 thrashing between Cavalry and Valour two years ago.

Last night, however, was already unique before it even got started, and not because assistant coach James Merriman had to take over for Pacific due to a suspension handed to head coach Pa-Modou Kah: before the first whistle even blew, the players took to the pitch in pro-union jackets, sending a strong and unified message to the league about recognizing PFA Canada.

But our thoughts on that discussion aren’t what this is about – this article is about scenes that unfolded on the pitch.

Atletico Ottawa had only one win to its name heading into its eighth match of the season, with Atletico Madrid Academy loanee Alberto Soto finally cleared to play. Atletico Ottawa had been struggling offensively beforehand, though you wouldn’t have known it with the way Ottawa got its start: Malcolm Shaw put the expansion side in front after just two minutes.

The club’s last game in the Winnipeg bubble looked to be in the bag early after both Shaws combined to ensure Malcolm had a brace by the fifteenth minute, with Atletico Ottawa seemingly on cruise control towards a comfortable win.

Not just six minutes later, however, the match was turned on its head when referee Ben Hoskins – already a relatively unpopular figure with Atletico Ottawa fans – handed midfielder Ben McKendry a red card for a dangerous high tackle, catching Polisi in the side of the heat.

Atletico Ottawa gaffer Mista was immediately heard on the broadcast loudly asking what the referee had against his team, with his complaints earning the head coach a yellow.

It wouldn’t take long for the tide to swell in Pacific’s favour, with club talisman Marco Bustos earning a penalty after fantastic combination play with Kading Chung. Former Liga MX striker Alejandro Diaz then converted from the spot:

The course of events prompted a verbal reaction from Mista that saw Hoskins hand the head coach his marching orders, meaning the match was now helmed by two assistant coaches in an unexpected league first.

While assistant coach Ajay Khabra had a lot to do in the team’s half-time talk, the second half would be off to a worrisome start with Diaz bagging a brace of his own after a set piece assembled by Marco Bustos. Just like that, it was all square at IG Field.

Bustos continued to do what Bustos does – pull the strings for Pacific – with the tricky midfielder eventually firing a shot that rocketed off the post beyond the dive of Dylon Powley. Diaz was there to redirect the ball into the net, scoring just the second-ever hat trick in league history whilst giving the Pacific the lead after a remarkable comeback:

Things went from bad to worse for Atletico Ottawa when centre-back Milovan Kapor picked up a knock: the club had already lost Brandon John to a season-ending injury, and had no real natural centre-back options on the bench. The club looked to defensive midfielder Chris Mannella to do the job.

With just over fifteen minutes left to go, Pacific FC got an insurance goal that felt like it had been coming via Terran Campbell, who had only scored once last year after being a golden boot favourite in 2019. Just like that, the match was wrapped:

At the final whistle, neither side was helmed by their head coach, six yellow cards had been handed out, six goals were scored, and one player was sent off.

The six-goal thriller was a remarkable match for Canadian Premier League neutrals, with the referee drama prompting a plethora of emotional comments from some impartial observers – though, as neither assistant coach did after the game, we won’t get into that. Malcolm Shaw surmised “that’s football”, which seems…accurate.

All-told, the ‘nightcap match’ (as titled by Adam Jenkins) was one to remember. Both teams will now return to their home markets for the first time since 2019, with Pacific FC rising to second place in league standings while Atletico Ottawa stays in sixth after a tough mentality test in the bubble.