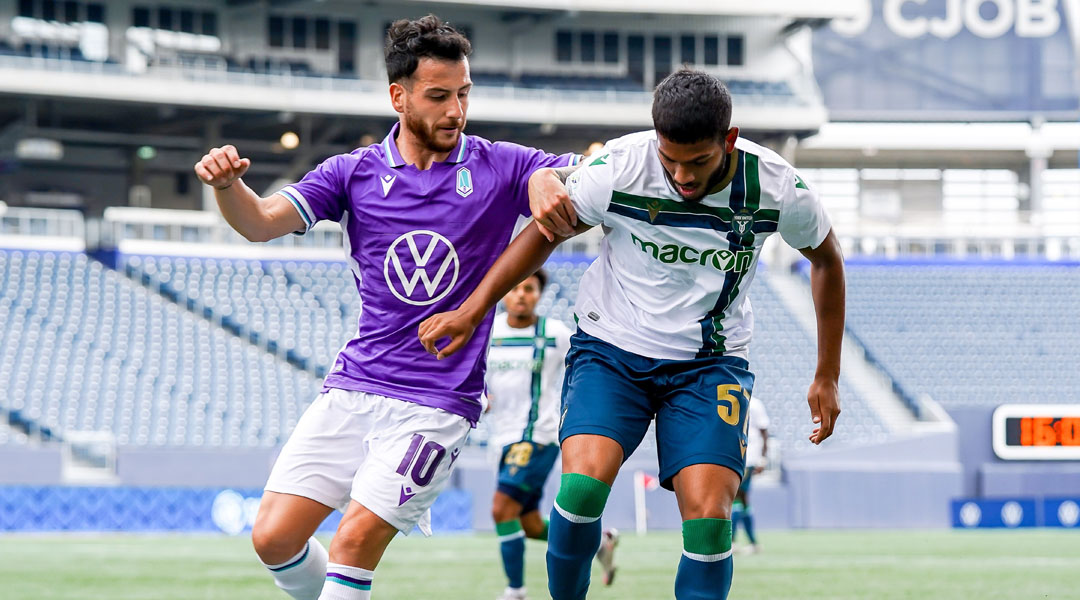 Without centre-backs Roger Thompson or Dominick Zator available tonight, York United fell to a quick double salvo from Pacific FC as the west coast side eventually rolled to a 3-0 victory in Winnipeg, Manitoba.

The victory marks Pacific’s third of the 2021 Canadian Premier League season so far, with the club rising to the top of the table for the time being while York United remains just out of the top half.

York United head coach Jim Brennan handed goalkeeper Niko Giantsopoulos his second start for the side, while Pacific FC saw Manny Aparicio miss out on a match against the club he used to captain.

It took just six minutes for Matteo to establish himself as the first Polisi brother to score in the Canadian Premier League, with the former MLS SuperDraft hopeful delivering a sharp right-footed effort to cap off a great lead pass from Ollie Bassett:

The Tridents would double the lead just three minutes later, with Bassett once again turning provider to see Marco Bustos score his second of the campaign, with his parents in the stands to share in celebrations:

The Nine Stripes nearly clawed one back with a phenomenal effort from Diyaeddine Abzi (who else?) in the fifteenth minute, with Callum Irving doing well to tip it above the top left corner.

Finding himself in the midst of things all over the pitch, Abzi would collect his second yellow after a late challenge on Kadin Chung in the 28th minute, with his previous shot being the only one on target for the Nine Stripes in the first half.

The Nine Stripes almost got one back five minutes into the second half, with Chrisnov N’sa beating Jordan Haynes to the ball but ultimately seeing his volleyed effort crash off the post.

A Pacific FC trademark – a moment of magic from Marco Bustos – saw the midfielder in space on the right, cut inside to make space between Wilson and Mohammed, and fire a sharp right-footed shot into the top left corner:

The goal means that Marco Bustos now stands as the all-time Canadian Premier League goalscorer, with the 25-year-old now having scored fifteen goals in the country’s top domestic division.

The Nine Stripes would see a trio of debuts as head coach Jim Brennan opted to try a fresh approach up top, with German forward Julian Ulbricht, Dominican Republic international Gerard Lavergne, and Jamaican striker Nicholas Hamilton all making debuts in the second half.

Still, it was Pacific who held the best chances to score in the closing minutes, with the west coast side causing chaos in the York United box before the ball ping-ponged its way out of play, and Terran Campbell forcing a fine save from Giantsopoulos in the final minute.

That being said, York United did have one late chance to pull back a consolation goal, though it slipped by Ozvaldo Ramirez before Julian Ulbricht fired well high.

The Tridents will now have a few days to prepare for its second coast-to-coast clash of the season, with Pacific FC taking on the Halifax Wanderers on Tuesday.

York United will be in for a tough test against Cavalry FC on that day as well, with the Nine Stripes now off to a 1-2-2 start following one of the shortest preseason’s in world football.