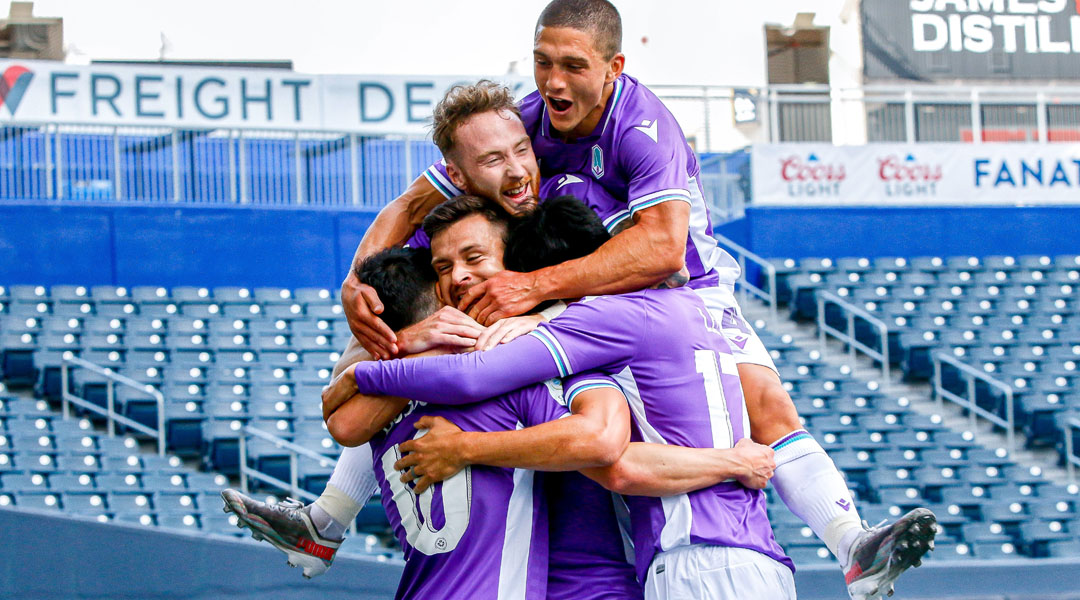 Two lightning delays couldn’t stop the second match of the 2021 Canadian Premier League season, which saw goals from Marco Bustos and Ollie Bassett lead Pacific FC to a win over the Halifax Wanderers.

The coast-to-coast clash was an open and entertaining affair that saw plenty of back-and-forth action, though the Halifax Wanderers had to see out most of match without head coach Stephen Hart, who was stretchered off due to medical precaution. In his stead was assistant coach Mesut Mert.

We would like to wish Stephen Hart all the best and hope for a healthy recovery.

The opening few minutes gave scent of an open game, with both sides freely attacking in back-and-forth action that, for two teams that underwent such long offseasons, looked very sharp.

It was Pacific FC who struck first blood in the 17th minute, with a clever backheel from Diaz seeing Marco Bustos through inside the box to fire home the go-ahead goal from a tight angle:

The Tridents made a touching gesture for teammate Victor Blasco in the ensuing celebration, dedicating the goal to the teammate who had recently lost his Father.

While a second lightning delay splintered the end of the first half, Halifax got off to a hot start when play resumed by nearly scoring some eight seconds into it.

Pacific FC then struck back quickly with an absolutely stellar goal from Ollie Bassett, who found himself in the midst of a great debut in an unexpected defensive midfield role.

With Halifax defender Eriks Santos struggling with a calf injury, assistant coach Mesut Mert made a bold attacking change to replace the defender with Jamaican international Alex Marshall at the end of the first half.

The second half would see fan-favourite Joao Morelli step on to replace Akeem Garcia, who had endured a very quiet first half. He nearly found himself on the end of a great diagonal ball from Marshall moments later, though the clever move was cut out by Irving.

Pacific nearly scored a third as the 60th minute approached, with Oxner forced into a save and an awkward bounce on the turf pitch requiring a boot from Jake Ruby to stop the ball from going in. The pressure wasn’t off at that point, with Doner quickly shutting down a shot opportunity in the resulting corner.

Some flashy footwork from Stefan Karajovanovic resulted in a freekick from a dangerous position, with Morelli firing in a curving rocket that went just high of the net.

The rookie Halifax man nearly pulled one back for his team a few minutes later, finding himself in possession after the ball had initially bounced off his back. However, his quickfire right-footed effort was well met by a diving Callum Irving.

A professional foul from Chris Lee prevented another late counter from Halifax, with the young defender bringing down Morey Doner as he tore down on the right flank.

Despite the Wanderers perhaps having a better second half than the first, the final whistle from Fabrizio Stasolla saw Pacific FC move to the top of the table after the first day of the 2021 CPL season, ahead of Atletico Ottawa on goal difference.

The Halifax Wanderers will need to regroup ahead of their next match against Valour FC this Wednesday, while Pacific FC will take on York United on Thursday.