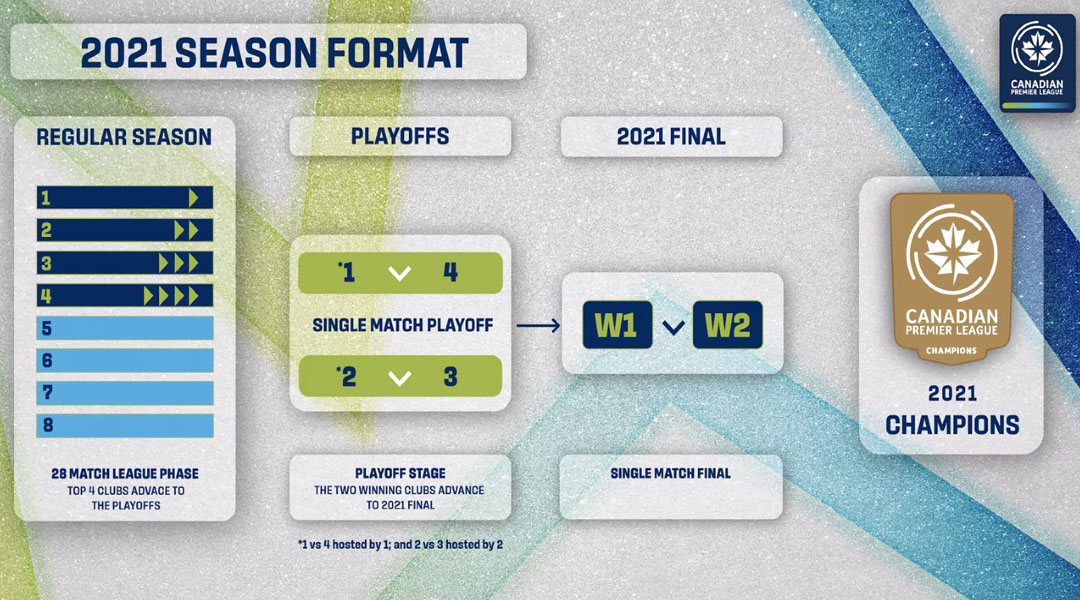 The Canadian Premier League has announced the structure of the upcoming 2021 CPL season, which will see a bubbled start to the campaign before a transition to home markets, with the regular season leading into a four-team playoff semi-final ahead of a single match CPL Final.

In a media call made today, Clanachan introduced the league’s new playoff format, which sees the top half of the league’s eight teams progress into a single leg semi-final, followed by a CPL Final set for mid-November.

Our focus is to deliver a full season with great competitive play throughout for our players, coaches, fans and supporters and I am pleased to be able to announce that today. With this format we have made every match competitive and meaningful. By adding a fourth team to the playoff series our clubs will battle to the end to be able to host a semi-final in their market and to be in the lead position so they can host the 2021 Final at home for their fans and supporters.

With the league remaining hopeful for fans in the stands following an eight-match-each bubbled segment set to kickoff in Winnipeg this weekend, clubs will go through twenty further matches after returning to their home markets, hopefully with fans in the stands. The schedule for that is expected to be release in the near future.

To minimize travel costs at that point, the league has made the decision to have an unbalanced schedule for the remainder of the season: each club’s remaining twenty matches will be split with sixteen against teams in their region, and just four outside of it. The regions are split with Pacific, Edmonton, Cavalry, and Valour in the West, and Ottawa, York, Forge, and Halifax in the East.

All eight of the Canadian Premier League teams have arrived in Winnipeg and have already entered the bubble, which will see the season’s first 28 matches (eight for each club) take place at IG Field.

Last year saw The Island Games come and go without any positive cases of COVID-19 in the bubbled tournament, and fortunately things are off to a similar start in Winnipeg: everyone in the bubble has tested negative thus far, with all bubble participants undergoing two tests every week with daily screening.

The inaugural Canadian Premier League season had a split-season format that eventually gave way to a two-horse race between Forge and Cavalry, which admittedly left little else for the other teams to play for. Last year’s Island Games format saw the top four teams progress to a group stage, and that led to some nail-biting moments right to the end of the regular season.

Everybody was in it to win it that weekend, and you want that. It’s something that I admire about other leagues across the sea, so to speak. They kind of use promotion and relegation as a tool to keep everybody interested, this is another way of doing it for us now in where we are as a league.

All-told, extending the playoff structure to four teams is a move that makes a lot of sense in terms of entertainment value: with the league still demonstrating a lot of parity, having the top half of the table offer a route to the CPL Final means that there’ll like be some nail-biters set to come this season, too.

This season marks the first time that the league has revealed information regarding its salary cap, though firm discussions with PFA Canada have yet to take place. This will also mark the first season for York United under its new rebrand.

The 2021 Canadian Premier League season will kick off this weekend, with double-headers set for both days. The matches will be available live on OneSoccer.