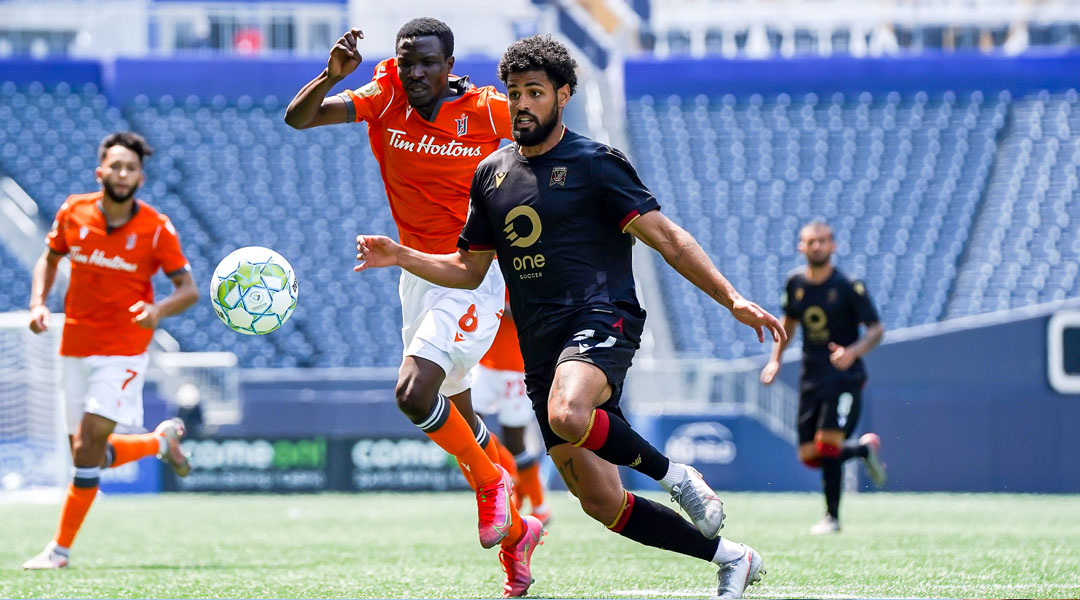 Valour striker Austin Ricci continued to prove lethal against the reigning CPL champions, scoring his second career goal to help his Winnipeg-based side restore its position at the top of the table.

Both teams fielded 20-year-olds in the goalkeeping position, with Valour bringing Jonathan Sirois back into the fold, while Forge handed Baj Maan his first start of the season.

The bench of both sides also saw new faces, with Rodrigo Reyes made available for Valour and Joshua Navarro appearing as an option for the hammers:

Sigma product Baj Maan came up big to keep the scores level ten minutes in, with William Akio finding himself the focal point of a Valour counter that saw the 22-year-old escape the mark of Dominic Samuel but find his shot well smothered by Maan.

The reigning champions responded back quickly, with Babouli striking the post and Nanco’s rebounded effort being cleared off the line from Andrew Jean-Baptiste.

The Hamilton-based side would come inches away from opening the scoreline as the first half wore on, with Garven Metusala – who nearly scored in his last match – heading the ball inches wide of the post. At the end of the first half, Forge outshot the hosts 9-2, though neither had broken the deadlock.

The second half saw Austin Ricci score his second of the campaign (with his first having also come against Forge), with the 25-year-old firing a tremendous right-footed effort that soared into the top right of the net beyond the outstretched arms of Baj Maan:

Ohin nearly had a second for his side fifteen minutes from time, breaking through to fire a curling effort before Dominic Samuel could close him down. Unfortunately for the home side, the effort looped just wide of the far post.

Chivas Guadalajara loanee Rodrigo Reyes got his first taste of CPL action with seven minutes left to go, coming on to replace Andy Baquero in the 83rd minute to keep the backline firm for the host side.

The final whistle confirmed a return to winning ways for Valour FC, with goalkeeper Jonathan Sirois locking in his fourth clean sheet in just as many appearances.

Valour will now prepare for its sixth match of the campaign on Thursday, with the side taking on Atletico Ottawa. Forge FC will have one less day of rest, taking on FC Edmonton this Wednesday.