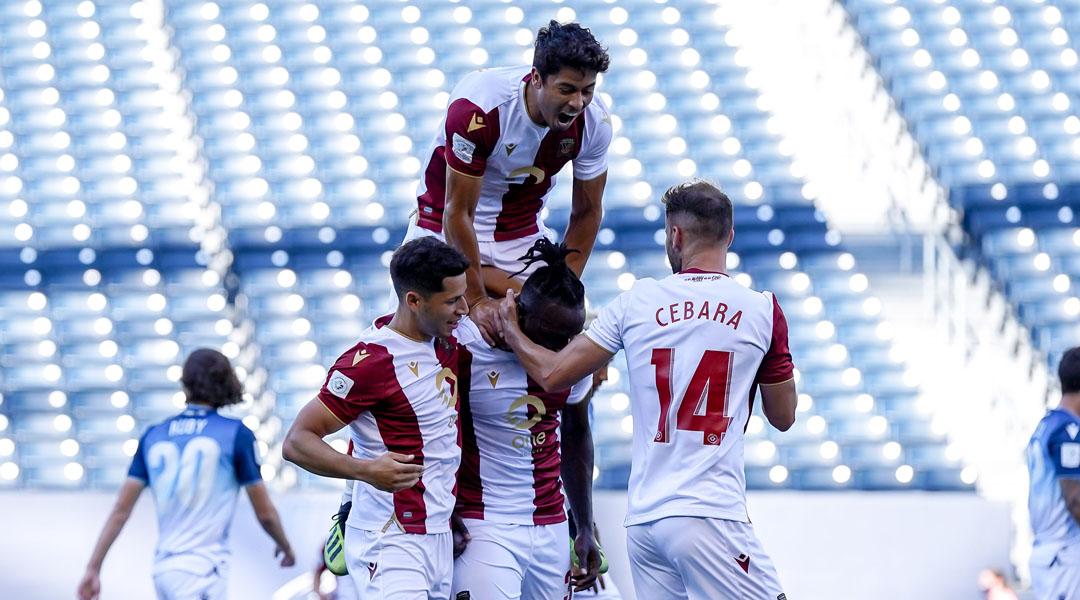 A high-tempo affair between Valour FC and the Halifax Wanderers saw the hosts collect their first ever back-to-back win in the Canadian Premier League, both of which were multi-goal results without any goals conceded.

Valour FC went into the game on a high after dispatching reigning Canadian Premier League champions Forge FC over the weekend, while the Halifax Wanderers found themselves on the wrong side of two goals against Pacific FC.

The lineups were largely similar to what fans saw in both club’s opening matches:

The match opened up at a high tempo, with Valour probing with some direct attacks while Halifax proved to be speedy on the counter.

Halifax defender Peter Schaale went down in the early minutes of the game, leaving the Wanderers a man down while he was tended to on the sideline until Jake Ruby came on to replace him in the fourteenth minute.

Jamaican international Alex Marshall then had a great early chance for the east coast side, finding himself with enough time and space in the box to take a touch and fire an effort that ultimately went right into the waiting arms of Sirois.

The hosts then earned two set pieces in a row, both of which met the head of Andrew Jean-Baptiste. He made good on his second opportunity to head the ball beyond Christian Oxner for his second-ever CPL goal.

The 29-year-old Haitian international had scored his first goal in Valour threads against Atletico Ottawa last year at The Island Games, with this being his first goal at IG Field.

It feels amazing. I had a few fans and supporters message me about getting a goal in front of the Trench army. Unfortunately, they’re not here, but I’ll try to get another one in front of them.

The Wanderers then appeared to score an immediate equalizer of their own via the boot of Alex Marshall, with the ball striking the crossbar and bouncing down seemingly beyond the line – though referee Carly Shaw-Maclaren dismissed the call:

The Halifax counter-attacking was nearly caught out when Valour turned possession shortly after, with Ricci turning a defender and advancing in dangerously before being dispossessed by Doner.

The chances kept pouring from Halifax, with Marshall having a third opportunity in the box and fellow international Joao Morelli firing a shot just over the bar moments later. That being said, Valour’s direct dribbling saw play go the other way, too.

The final opportunity of the first half came through rookie forward Stefan Karajovanovic, who fired a close-range effort but found himself denied before the whistle prompted the end of the first half.

Ruby would collect the first yellow of the match by taking down Austin Ricci as the duo chased a lead ball to start off the second half, with English forward Cory Bent coming on for Omar Kreim.

Ricci nearly bagged his second professional goal in the 65th minute, completing a well-time run to collect a ball from Moses Dyer before finding his shot blocked by the Halifax goalkeeper.

A tremendous run by Morey Doner – who looked the best man on the pitch for Halifax tonight – nearly saw an equalizer for the Wanderers, with an eventual effort from Englishman Cory Bent flying barely an inch wide of the post.

Valour goalkeeper Jonathan Sirois came up big in the game’s dying minutes, diving low to the right to stop a headed equalizer from Eriks Santos – Halifax were getting the chances, but the next goal wasn’t to be theirs.

Substitute striker William Akio settled the affair in the 89th minute, scoring his first professional goal to double the home team’s lead and cement the win.

Valour FC will now face off against Atletico Ottawa (who they recorded their biggest-ever win against at The Island Games), whilst the Halifax Wanderers will take on Cavalry FC later on in Saturday’s double-header.

In each club’s match after that, IG Field will be permitted to have fans in the stadium.

Having now dispatched both of the 2020 CPL Finalists, Valour FC defender Andrew Jean-Baptiste has urged the club to keep its feet on the ground and remained focused on the upcoming fixtures.