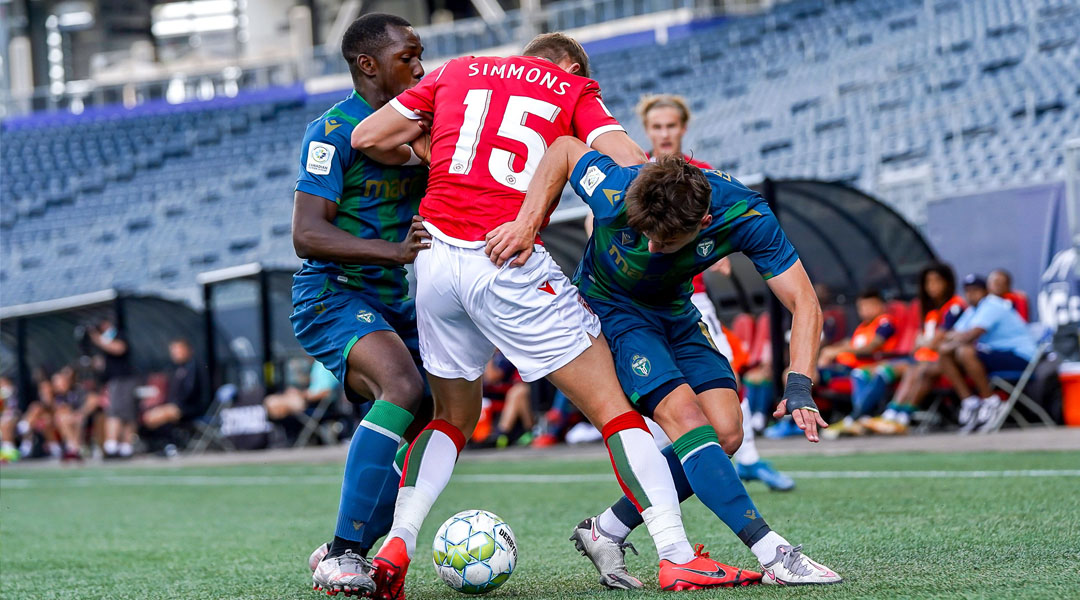 York United and Cavalry FC battled to a scoreless draw at IG Field tonight in a match that could have easily seen more than five yellow cards handed out by referee Filip Dujic.

This wouldn’t be the first time that a match between the two has resulted in mass player altercations, either.

With Cavalry entering the match following back-to-back losses and York United rooted in the bottom half of the table, neither side will have felt happy sharing a point this Wednesday evening.

The York United defense was put under pressure early on, with both Nik Ledgerwood and Jose Escalante forcing some quick defensive thinking from their opposition’s back four in the opening minutes.

Ramirez then slipped behind the Cavalry defense in the 24th minute, but opted to try to cut back as he reached the box instead of taking a shot – and that allowed Cavalry to snip the ball from him as he made the move.

York United had a good eye for aerial lead balls in the first half, resulting in a few good counters as the long balls found their targets with good consistency, though their closest shot of the first half ultimately from a long-range effort from full-back Terique Mohammed.

Cavalry fans likely expected a goal when former Forge striker Anthony Novak collected a cross just a foot in front of Nine Stripes goalkeeper Nathan Ingham, but his touch allowed the goalkeeper to get gloves onto the ball.

Toussaint and Norman then got into eachother’s faces following a challenge from the Nine Stripes man, with both teams clashing together as the altercation got physical. At the end, referee Filip Dujic only handed out yellows to Isaiah Johnston and David Norman Jr. after both teams were separated.

Cavalry FC then caught York United out on the counter as the first half wound down to a close, with Brazilian midfielder Richard Luca supplying a good lead ball into the path of Novak – though Diyaeddine Abzi did well to close down the striker to block his shot moments later, continuing the impressive start to his campaign.

The second half opened with Abzi at the helm of two chances before turning provider with a sharp nutmeg pass that eventually saw Ramirez fire wide and off the back of a teammate.

Novak would then collected a yellow for dissent after strongly voicing his opposition to soft call by the referee, who didn’t take too kindly to the comment.

With the game remaining quite chippy, perhaps it was not surprise to see former York United midfielder Joseph Di Chiara come on to play against his former club, with the Toronto-born midfielder having collected a yellow in the pair’s previous meeting.

Cavalry nearly got the go-ahead goal after a shot from Richard Luca deflected off of Chrisnovic N’sa, with the ball rebounding right to Novak. His shot, however, was gobbled up by Ingham yet again, with several players from both teams getting into another altercation afterwards.

Novak would see another opportunity barely slip him by in the 68th minute, with a close-range effort being immediately closed down by an impressive slide tackle from Chrisnovic N’sa.

The defender would be guilty of bringing down the Cavalry captain just outside the box two minutes later, but the dangerous set piece position went to waste with an effort from Richard Luca that went well high.

Mohamed Farsi came inches away from the go-ahead goal ten minutes from time, sneaking into the box before a clever touch from Jordan Wilson limited the damage to just a corner.

Moments later, Ali Musse side-stepped Mohammed to drive the ball right back into the box, though his pass was cleared.

In the final minute of added time, Di Chiara would earn one last freekick opportunity for Cavalry right outside the box, with Musse forcing a fine stop from Ingham and the following corner kick seeing Klomp head just wide.

While Cavalry looked the better side at the Nine Stripes saw some tired legs, no goal would result from the game’s final minutes.

York United will now face Valour in four days, with Cavalry squaring off against the Halifax Wanderers a day prior.