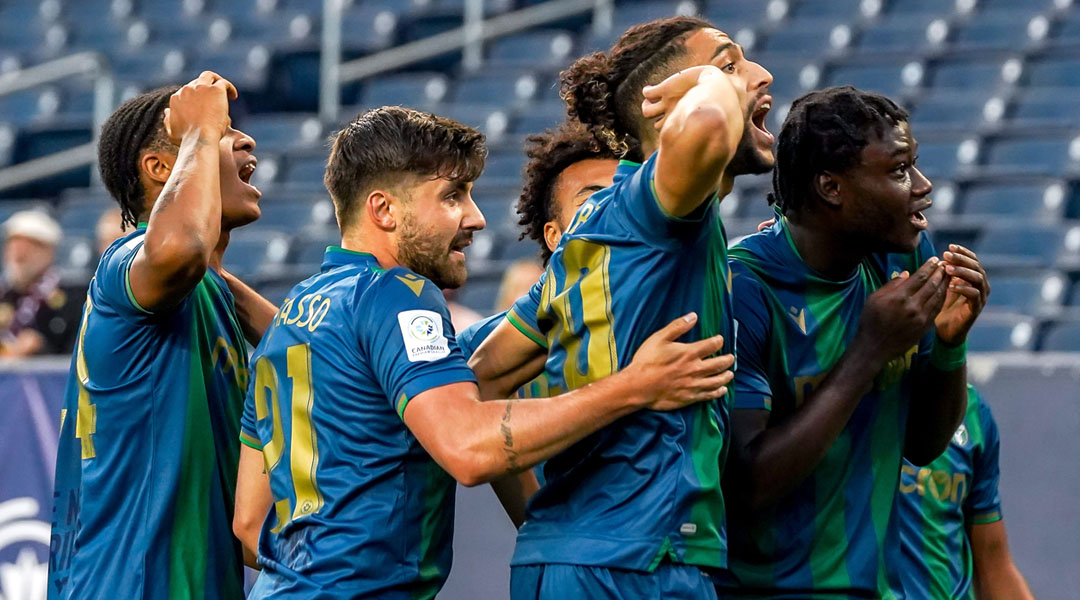 Fans in the stands were treated to a high-tempo affair as York United and Valour FC battled to a 2-1 scoreline tonight at IG Field.

The Canadian Premier League double header was the first night fans were allowed into the stands to take in club football this year, though a strong start from Valour eventually gave way to a defeat that wasn’t devoid of controversy.

The squad selection set up a battle of the goalkeepers, with York United handing Nikolas Giantsopoulos his first appearance since arriving from Cavalry FC, and Valour handing a debut to former Nine Stripes goalkeeper Matthew Silva in his second season with the side:

It was the start of dreams for fans in the stands, with Valour FC Captain and Gatorade Player of the Week Andrew Jean-Baptiste scoring his second goal of the season to put the hosts in front after just five minutes played:

The Nine Stripes had a near-immediate response, with Max Ferrari tearing in from the right but ultimately seeing his goalscoring effort be mitigated into a corner kick opportunity.

Still, it wouldn’t be too long before York United answered in full: a tantalizing cross from Diyaeddine Abzi floated in perfectly for teenage striker Lowell Wright, who headed in the equalizer from close range to mark the first time Valour had conceded this season.

The twentieth minute saw Chrisnovic N’sa cut into the right side of the box, firing a left-footed effort that curled just wide of the far post. Matt Silva was certainly in for a busy night, with Abzi firing a right-footed rocket for the goalkeeper to parry upwards soon afterwards.

A high tempo first half saw both sides exchange blows, with the Nine Stripes coming inches away from a headed equalizer from Ferrari as Abzi, N’sa, and Ferrari caused problems on one end while the likes of Cebara, Ulloa, and Dyer probed at the other.

The match turned quite physical, though it took 42 minutes for the first yellow to be handed out by referee Yusri Rudolf: it was Aleman’s name that went into the book.

The second half got off to a dagger-edge start as well, with the aforementioned Keven Aleman firing a freekick just an inch or two high of the crossbar that looked to have caused Giantsopoulos worry.

York United got a freekick of their own on the very next play, with Terique Mohammed firing in a hopeful aerial ball. While Silva rushed out for it, the ball looped off of the head of Dominick Zator instead to hand the Nine Stripes the lead:

It wasn’t all jubilation for the Nine Stripes fans, with York United Captain Roger Thompson suffering a knock during the play which required him to be replaced by Jordan Wilson. Michael Petrasso would have an injury scare minutes later, but would remain in the match.

The Nine Stripes should have made it three after Silva spilled a shot from Max Ferrari, with CF Montreal Academy product Cedric Toussaint’s follow up shot rising much higher than the net.

Substitute Rafael Garlhardo made his presence felt shortly after coming on, setting up a wonderful run for Jared Ulloa on the right flank before the winger went down on a light challenge from Terique Mohammed.

Galhardo himself earned a freekick in a dangerous area ten minutes from time, stepping up to take the set piece himself. After a foul during the first freekick by Jordan Wilson allowed Galhardo to take a mulligan, the Brazilian ripped a rocket right into the top left corner that was dramatically called back by a positional infraction from Jean-Baptiste.

The crowd responded with boos aplenty, with a member of the Valour FC coaching staff also collecting a yellow in the resulting complaints. For our money, referee Yusri Rudolf’s decision to nullify the freekick will be a talking point for some time in CPL circles.

Abzi thought he’d won a penalty for the Nine Stripes halfway through seven minutes of added time, with the winger surpassing two defenders after going to the corner flag before getting shouldered out of play by Andrew Jean-Baptiste.

There would be no more late drama to the match, with all three points going to the Nine Stripes at the conclusion of this late night clash in Winnipeg, Manitoba.

With its first win of the season now locked down, York United has a short turnaround time before facing Pacific FC this Saturday. Valour – who still remain top despite tonight’s loss – will have an extra day of rest before taking on reigning champions Forge FC this Sunday.