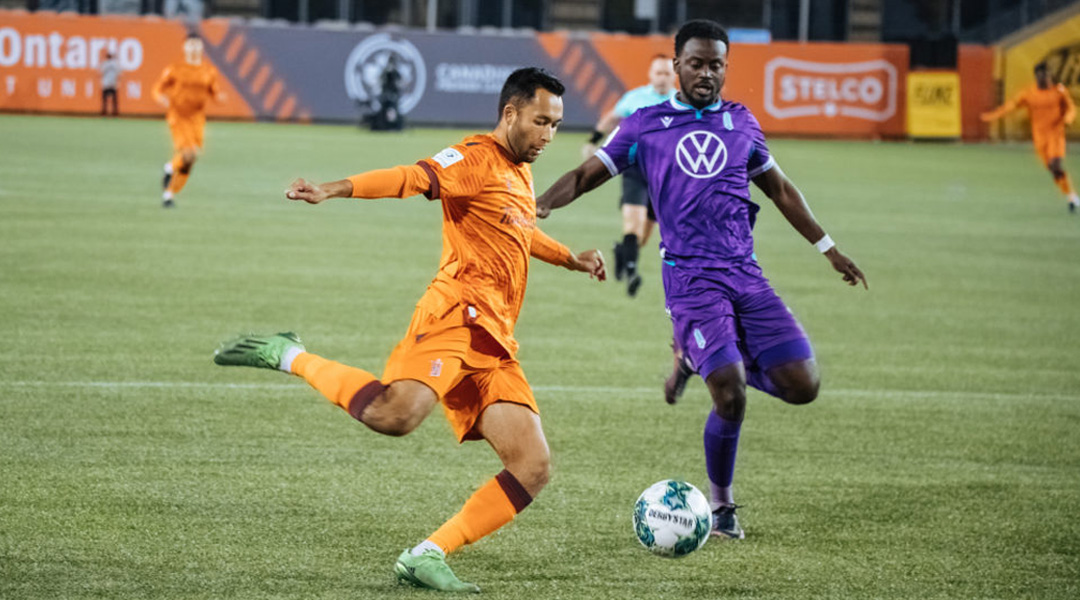 For the second time in less than a year, Pacific defeated Forge 1-0 at Tim Hortons Field when it mattered most.

The Tridents got their goal at the hour mark from Jordan Brown to stun the Hammers and jump ahead of them with a game to play.

Pacific coach James Merriman switched his starting eleven up quite a bit from their weekend win against Edmonton. He made four changes to the team, with a new striker, midfield pairing and left back.

Forge made three changes ahead of this game, changing left back, a center midfielder and their striker.

The first serious moment of the match came in the ninth minute, where Thomas Meilleur-Giguere’s header from a corner was saved by Triston Henry. That was indicative of the first 20 minutes, as the visitors were asking the questions.

Forge settled into the game about a quarter way in, but failed to really create a proper chance to test Callum Irving. The Hammers only managed four shots in the 90 minutes.

Forge coach Bobby Smyrniotis made a switch at halftime, taking off Rezart Rama and bringing Dominic Samuel. The Albanian was on yellow card watch, which prompted the switch.

The game’s only goal would come at the hour mark: Malik Owolabi-Belewu attempted to dribble out the ball into the midfield. He was dispossessed, with the ball falling for Marco Bustos. The Pacific number ten drove into the box and fired a shot that was initially saved by Henry, but Brown – in the right place at the right time – knocked it home to give the guests the lead.

Forge tried to level the score, but even with the four substitutes, but could not do anything meaningful. Their last chance came in stoppage time, when Samuel whipped the ball in to Emery Welshman, but the substitute failed to get his header on target.

As a result of the win, Pacific climbs above Forge and Cavalry into second spot. With the CPL playoffs starting in a week and a half’s time, this victory could not have come at a more opportune time.

Only Pacific can still catch Atletico Ottawa at the top of the CPL table at the conclusion of the regular season. If the Tridents win their final game against Cavalry and Ottawa loses to York, then it will be the defending CPL champions that finish atop the league table. They can also pip Ottawa with a win if the capital club draws such that Pacific overturns the goal difference disadvantage, currently at three. Forge can finish as high as second, but that is only possible if they beat HFX Wanderers on Sunday if Pacific does not beat Cavalry. Any other result would see them finish third or fourth.

Cavalry, the other team that will play in the CPL playoffs, will finish second if they defeat Pacific and Forge fails to win. That match will take place on Saturday.