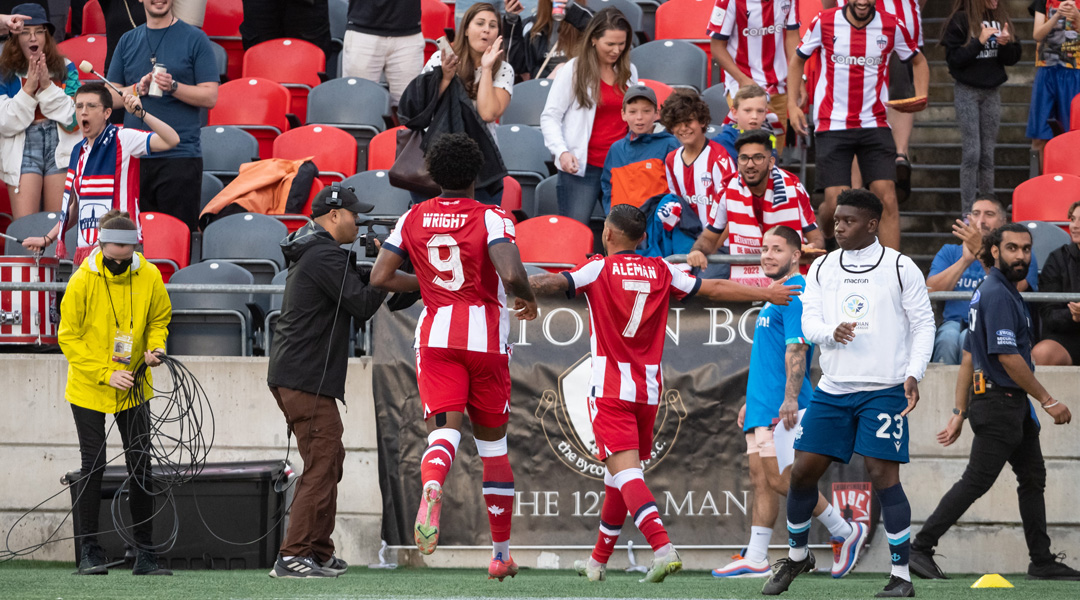 Have you ever wished for a soccer match that turns into the wildest finish of your entire life? Well, this is the match for you. Going into the 57th minute, Atletico Ottawa had a two-goal lead, courtesy of a wild Keven Aleman goal that really set the tone early in the first half:

Atletico Ottawa’s second goal came in the second half through a a wonderful Maxim Tissot finish following a superb cross from Brian Wright:

The Wanderers brought it to within a goal as Pierre Lamothe cooly slotted his first goal of the season on a wonderfully worked move from the East Coast side not long after that.

Now, the next 30 minutes didn’t really have much happen. Halifax pressed hard and put some pressure on the ATO goal. But in the 89th minute, Lifumpa Mwandwe drew his fourth penalty in five games (yes, it is worth emphasizing that). Sam Salter stepped up and scored his eighth CPL goal of the season (good enough for 4th in the golden boot race).

All done? No, not even close. Just moments after the Wanderers thought they salvaged a point, ATO tied the game up on a Carl Haworth cross that was finished off by Ivan Perez. But wait, at first it was called off for offside. After two minutes of the players arguing with the referees, the goal was eventually given.

The match would finish in dramatic fashion, with Atletico Ottawa securing a 2-1 win to keep HFX 14 points off of a playoff spot with eight games to go. With

A Note From Ben: While these match recaps are unbiased, as I Wanderers fan, all I can say, is that I am in sever emotional pain due to the ending of this game.