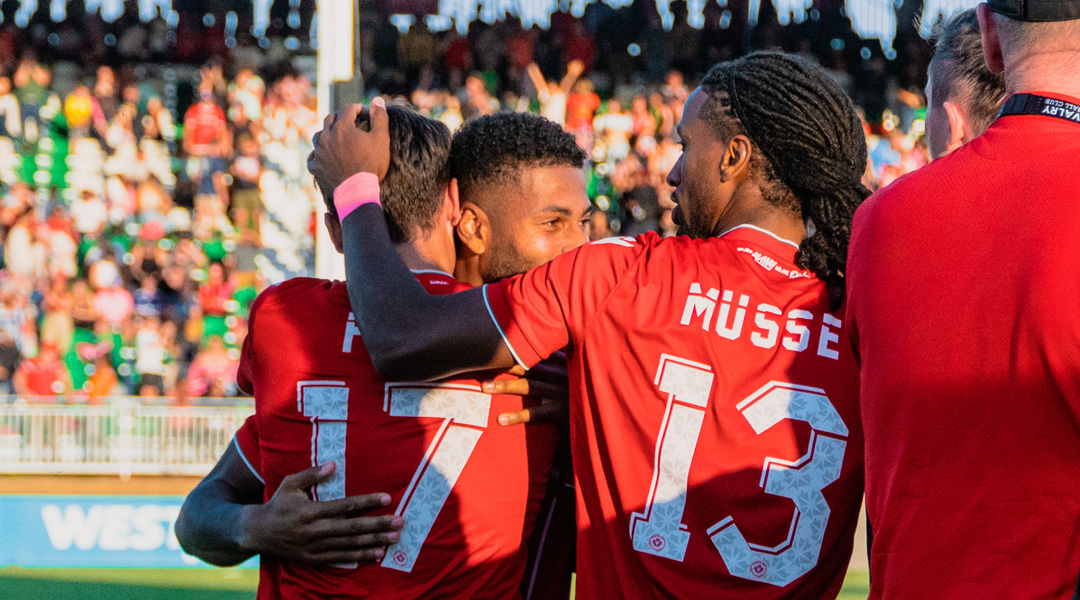 It was left late, but it was former Pacific and Atletico Ottawa midfielder Ben Fisk that decided the regular season title.

The Cavalry attacking midfielder scored a tap-in in the 89th minute to give Cavalry an important 1-0 victory over the defending CPL champions Pacific. The result means that Atletico Ottawa will win the CPL regular season title irrespective of their result tomorrow evening at home to York United.

Cavalry and Pacific met for the fourth time this year on Saturday evening, with both teams winning once each in their previous meetings. The Tridents came into the match on short rest, having defeated Forge FC 1-0 on Wednesday night at Tim Hortons Field. Only three changes were made by James Merriman going into the Cavalry clash.

The Cavs had booked their CPL playoff berth last Sunday as they defeated Valour 2-1 to qualify for the postseason with a week to spare. Coach Tommy Wheeldon Jr also made three changes to his side ahead of the match.

It was a largely even game in terms of statistics, though the Cavs did have slightly more possession (52 to 48) plus shots (eight to six) and shots on target (four to one).

The hosts nearly took the lead a minute in as Ali Musse found Myer Bevan in the box. The Cavalry number nine hit his effort over the bar.

The home side had two major chances earlier in the second half: Mikael Cantave had a good effort early in the second period with his shot easily saved by Callum Irving. With 20 minutes to go, there was a massive slip-up in the Pacific defense, allowing substitute Gareth Smith-Doyle in. The youngster’s shot was too close to Irving, who managed to save it. That made amends for the mistake from his defenders.

Just when it seemed that the game would end without goals, a pair of substitutes made all the difference. Goteh Ntignee managed to sit down a defender before crossing the ball. Irving got his fingertips on it with the ball falling to Fisk, who tapped it into the net.

Atletico Ottawa also benefitted from Fisk’s goal as it means Carlos Gonzalez’s side will finish atop the regular season standings. They have now completed an improbable turnaround, going from finishing last a year ago to being the best of the lot this time around. They will be the first team to benefit from the extra cash prize as well as the new trophy awarded to the regular season champion. They will play their final regular season game at home to York United on Sunday.

Last season also saw a former player of two clubs score against one former team to benefit another as playoffs looked, with Mathew Arnone’s goal against Halifax seeing York United sneak into playoffs over the east coast side.

The win was Cavalry’s tenth home victory of the season, three more than anyone else. It also moved them up to second spot going into Sunday’s final day of the regular season. Should Forge defeat HFX Wanderers at home, then Cavalry will finish third and take on the Hammers in the semifinals. Pacific would battle Ottawa in the other semifinal in that case. If Bobby Smyrniotis’ team drop points to the Wanderers, then the Cavs will end up second and face Pacific twice more over the next two weeks. Forge would face Ottawa in the other semifinal.

For those unfamiliar, the CPL playoffs will feature a two-legged semifinal and one-off final, with the regular season standings determining who faces who and where. The first-place team after the 28-round regular season will face the team who finished fourth, while the runners-up will battle against the third-place team. The higher ranked team will play the second legs of the semifinals at home. In the final, the higher ranked team from the regular season will host that match.