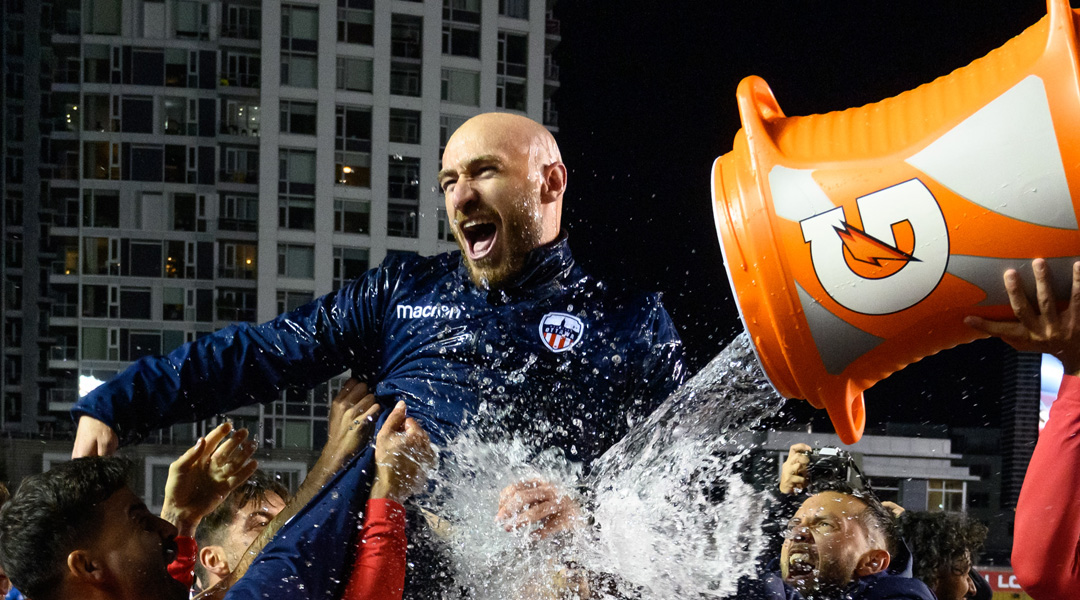 With everything already decided regarding the CPL regular season champion and playoff places, Atletico Ottawa and York United took to the pitch knowing the result would bear little significance. In the end, the sides played out to an entertaining 2-2 stalemate at TD Place.

Since Carlos Gonzalez’s Ottawa side already clinched the regular season title courtesy of former player Ben Fisk, it made sense that the Spaniard made seven changes to the team that topped HFX Wanderers last weekend. Only Sergio Camus, Maxim Tissot, and Zakaria Bahous retained their starting roles in the team.

York, coming off of a 905 Derby reverse at Forge last weekend, decided to make two changes to that same team: Isaiah Johnston made way for Matthew Baldisimo while Mo Babouli returned to the lineup in place of Ronan Kratt.

It would be the home side that took the lead after 24 and a half minutes. After York United keeper Eleias Himaras made a save, Ballou Tabla put another shot on goal. Himaras once again got a hand on it, but only to direct it into the path of Tissot, who put the ball in the net.

Ottawa managed to stay in control of the game after the goal, and looked motivated to end the regular season on the right note. They would double the lead before the break, courtesy of Brian Wright: the ball fell to Bahous on the wing, allowing the midfielder to play a perfect cross into Wright. The Ottawa striker produced a perfect flick to beat Himaras, giving the hosts a 2-0 advantage.

It seemed as if the regular season champions would win their 14th game this year, but York United did not give up. At the hour mark, the Nine Stripes got a goal back. Chrisnovic N’sa whipped in a 50/50 ball in the box, with Osaze De Rosario beating two Ottawa defenders to head the ball past Sean Melvin. It was just before the goal that De Rosario had a goal chalked off for offside. Still, it was the 21-year-old’s 12th goal on the year, one back of Pacific’s Wero Diaz in the Golden Boot race.

De Rosario was perhaps lucky to stay on the pitch, as not too long after his goal he received a yellow card. Then, moments later, he put in another tackle which got the players of both teams riled up. Some of the York players even went to the referee to argue the striker’s case. In the end, De Rosario received a final warning from the referee.

Just eleven minutes from time, the guests levelled the score after what looked to be a failed corner turned out perfect for the Nine Stripes. Tass Mourdoukoutas played the ball across to N’sa, who went for an extravagant scissor kick. It worked out fine for the left-back as he found Jordan Wilson, who tapped the ball home to level the match.

York will end their season with a total of 34 points, good for sixth spot (9-7-12 record). They had the joint second-worst goals scored with 31, largely the reason why they will not partake in the postseason. The one bright point for them came in the form of Osaze De Rosario, whose 12 goals was the second best in the league behind Diaz.

That was the last goal of the match, and indeed the Canadian Premier League regular season. The result put Ottawa on 49 points to end their 28-game schedule. They finished with a record of 13-10-5, boasting the second-best defense in the league. They will play their CPL semifinal against Pacific, who could have beaten them to the regular season title had they defeated Cavalry a day earlier. The first leg at Westhills Stadium will be on Saturday, with the return game at TD Place going on the 23rd.