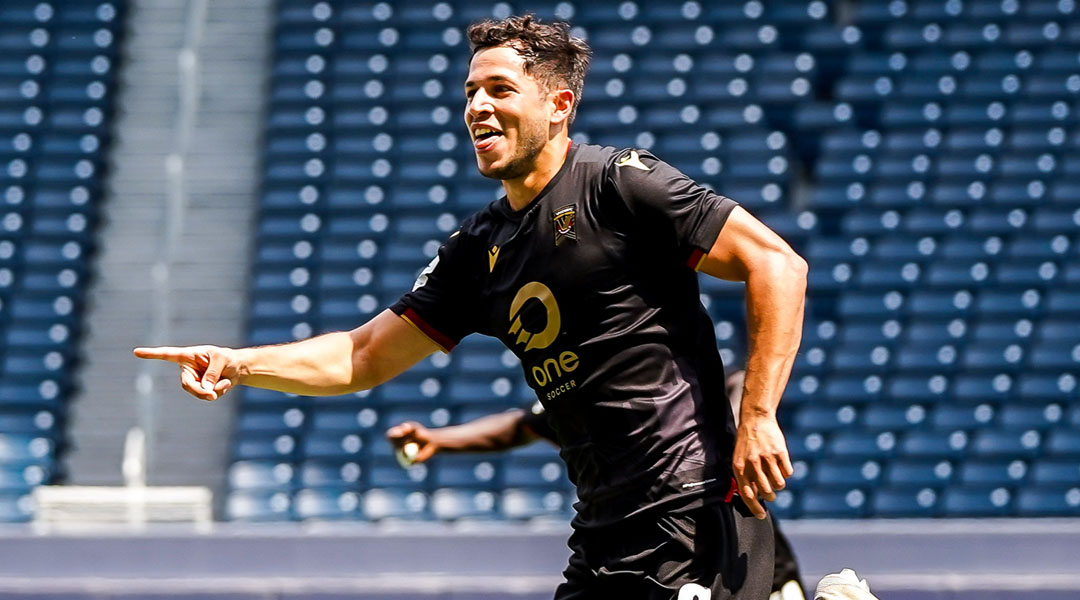 Austin Ricci looks set for a Canadian Premier League return in the near future.

The 25-year-old striker was teased to be nearing a new contract through player agent Dylan Carreiro, with Manuel Veth reporting that at least four CPL sides are interested in the physical forward.

Ricci scored a head-turning 8 goals in 18 appearances for Valour FC last season before his breakout campaign was cut short following a collision with Triston Henry. The Richmond Hill-born striker had trained with York United in March, prompting speculation about a potential return to the club where he had made his pro debut before landing with Valour FC a year later.

While York United now has a full 23 man roster on paper, we can’t fully rule a Nine Stripes return out: the concussion injury suffered by Martin Graiciar is looking much more long-term than initially thought, and we know York United is a side that hasn’t been afraid to spend on roster replacements. Plus, Ricci trained with the club during his recovery – nobody else has had such a close look at the striker.

FC Edmonton had spoken with Ricci in the offseason, but that was before the club’s roster rebuild took a minimum salary focus. The other two frontrunners would likely be Cavalry and Halifax, with the former losing out on Novak to a preseason knee injury while the latter could use some offensive power, especially with Morelli likely out long term.

Halifax wouldn’t comment on any potential signing, simply stating that Austin has done well to recuperate to be where he is now, and they hope he can be ready to play at the CPL level again this year. Northern Tribune has learned that Ricci attracted some USL interest too, which isn’t too much of a surprise following his red-hot form last year.

Given that Valour moved on from him following his injury, we rate a return to Winnipeg as a much less likely outcome – even though the club then ran into travel difficulties with Chilean forward Walter Ponce.

The Richmond Hill native is known to be a physical striker with plenty of pace, though it took him some time to find his footing at the Canadian Premier League level: he wasn’t able to accumulate many minutes under Jim Brennan back in 2019, racking up just 234 minutes in eleven appearances before leaving with only a sole assist against Valour.

His time with the Winnipeg-based club saw him do just about everything but score at The Island Games: he drew penalties, hassled defenders, and set up his teammates well through six matches without any goals to show for it. That changed in 2021. with Ricci starting his campaign with a goal and assist against Forge FC, later even bagging a brace against York United in the Winnipeg bubble.

Ricci procured 5 goals in 16 league appearances last season, while also finishing as the 2021 Canadian Championship top goalscorer after a brace against Atletico Ottawa and the hard-fought goal against Forge which resulted in his season-ending injury:

Ricci’s recovery has been a long one, but those following his progression online have seen a dedicated athlete working hard on his recovery. As a result, it’s no surprise that yesterday saw Dylan Carreiro tease news of Ricci’s return coming sooner rather than later.

“He’s got a little way still to go in his rehab so we are just happy to help him here,” stated York United’s Angus McNab back in March, “who knows what happens down the line, but he got injured playing in the league and I’m sure all of the clubs in CPL would do this for someone who is back home recovering to get back on the pitch.”

Before arriving to professional football, Ricci had certainly proven devastating in the amateur and semi-pro circuits: he bagged 22 goals and 7 assists after 71 appearances at the NCAA level, then went on to get 12 goals and 7 assists in the PDL level before arriving to League1 Ontario’s Vaughan Azzurri, where he scored 5 goals in just 8 appearances.

While it remains to be seen what’s next for Austin Ricci, there are a number of CPL sides who would be happy to roster the striker as they fight to separate themselves from the pack in this season’s opening rounds.