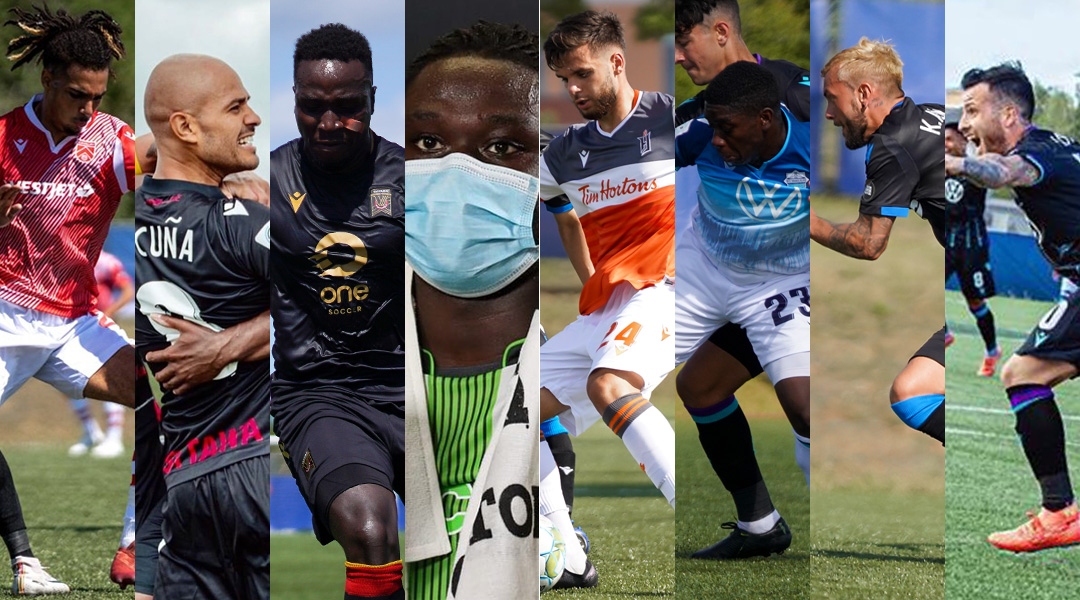 Now that every Canadian Premier League team has taken to the pitch in competitive action at The Island Games, many of the league’s new additions have had their first chance to impress. Despite being without a competitive game for ten months, the action on the pitch has been good – and that’s in no small part to the players listed below.

Without further ado, let’s take a look at Northern Tribune’s picks for the most influential newcomers after after first round of action:

The 32-year-old Mexican midfielder dictated the tempo of the expansion side’s buildup, and his smart passing vision and situational awareness were a key driving force for Mista. As the central cog in Atletico Ottawa’s midfield, Acuna found himself covering all aspects of the pitch: he was central, he was combining with Vashon Neufville on the left, he was on the right, and he was dropping back to help his side defensively, too.

Many other players impressed for Atletico Ottawa, too: Milovan Kapor proved a consistent defender, while Neufville was highly influential before he earned a second yellow card (and marching orders) that head coach Mista intends to appeal. It’ll be interesting to see how the side fares in its second-ever game on Wednesday afternoon.

The former AS Blainville fullback beat out Steven Furlano for a roster spot in Tommy Wheeldon Jr.’s camp, and it didn’t take the 20-year-old long to prove his worth: he made his debut as a substitute against rival side Forge FC and earned a controversial penalty with one of the final kicks of the match.

The big performance earned him a start against Valour FC three days later, and Farsi once again proved pivotal with his cross to target man Marcus Haber resulting in the go-ahead goal. Following up his impressive debut with a man-of-the-match performance days later, he follows in the footsteps of Diyaeddine Abzi to become the second AS Blainville defender to make waves in the Canadian Premier League.

There’s also lot of hype around Cavalry FC newcomer Jair Cordova, who missed the side’s opening two matches due to a knock. The Alberta-based club is hopeful that he’ll be fit to face FC Edmonton this Thursday, with the Peruvian forward expected to fill in the goalscoring shoes of Dominique Malonga. For now, however, Farsi has been the most influential addition to Cavalry FC – though Haber has been off to a solid start, too.

The 21-year-old Belgian midfielder came in as a replacement for CPL MVP Tristan Borges, occupying a more attacking midfield role overall. Sabak’s tricky footwork proved hazardous for Cavalry FC, with Sabak drawing plenty of fouls. As legs got tired throughout the match, he took advantage of a bigger opportunity for flashy footwork as he got more time on the ball.

While he had a quieter game against FC Edmonton, his good technical ability kept the side in possession even when he was surrounded by the opposition, with Sabak showing a good eye for distribution as his side etched out a 2-0 win over the Eddies.

An honourable mention should go to former Toronto FC man Molham Babouli, who came on as a substitute against Cavalry FC and provided a key pass that eventually led to Kyle Bekker’s go-ahead goal in the second half. He started against the Eddies, and has thus far has looked like a good pickup for the hammers. Might York9 FC regret not signing him?

Former Sacramento Republic midfielder Kevin Aleman had a relatively tame debut – mostly courtesy of a staunch Forge FC defense – but as a whole the seeds of success were there. Aleman made several good runs against Forge FC and forced his way into good shot options, with the creative midfielder looking like a good addition to the Eddies lineup.

While he wasn’t able to deliver the final touch within the box during his side’s 2-0 loss to Forge FC, the 26-year-old midfielder looks like a threatening player who is likely to get off the mark for FC Edmonton sooner rather than later.

Top CPL-U Sports Draft pick Cory Bent was tireless during his Wanderers debut: he was leading the line in the attack, dropping back to help with defensive duties, and seemed to nary put a foot wrong as he helped his club secure their first point of the Island Games. Earning man of the match honours, the speedy youngster really impressed in his debut match after taking a long road to professional soccer.


An honourable mention goes to Brazilian forward Joao Morelli, the 24-year-old that Kaka once earmarked as one for the future. He calmly slotted in the opening goal of the Wanderers’ season, and he looked lively for his first seventy-two minutes of action for the east coast side. Big man Ibrahima Sanoh scored on his debut, too.

There was a lot of expectation placed around former Valour FC midfielder Marco Bustos, who arrived to Pacific FC as one of the league’s most highly-paid midfielders. Bustos won seven of four duels in his debut, made three successful dribble attempts, and scored a quick twisting shot that rescued a point for his new club.

Bustos proved capable of taking whatever chances he was given, and that’s exactly what Pacific FC will need for him to do if they’re going to make the playoffs. With the midfielder having previously hoped to break into the double digits for both goals and assists, he’s off to a good start under head coach Pa-Modou Kah.

An honourable shout would go to Jordan Haynes, who got a game-high 82 touches during his debut for the Trident on Saturday. The 24-year-old full-back looked tireless on the ball, despite the fact that he couldn’t stop his side from giving away two penalties.

With thirteen Valour FC players having made their debuts on Sunday, there were a lot of potential selections for the Winnipeg-based side’s most impressive newcomer. With the side falling to a 2-0 loss against Cavalry FC, however, the game didn’t go how any of them would have wanted.

28-year-old centre-back Andrew Jean-Baptiste was the most impressive of the bunch, with the former MLS defender putting in a good shift that, despite the loss, helped his club look a lot more solid than the 2019 variant of the squad. He showed real grit by playing through a high kick to the face from Sergio Camargo, and helped organize the club’s defensive line through the entire match. Donning the captain’s armband for his side following the substitution of Dylan Carreiro, Jean-Baptiste – who also pressed upwards in an effort to get his side a goal – had a fair penalty shout after seeing his effort clip off the arm of Robert Boskovic.

An honourable shout also goes to Congolese international Arnold Bouka-Moutou, with the veteran Ligue 1 left-back looking solid before suffering a hamstring injury in the second half. With Chakib Hocine already on the injury list, the defensive injury woes may be off to an early start for Rob Gale.

The teenager came on as a substitute during the Nine Stripes’ opening bout against Atletico Ottawa, linking up with fellow teen Max Ferrari to deftly convert a chance to the left side of the net and start a comeback for the Nine Stripes. If debut nerves were a thing for Wright, he certainly didn’t show it.

Wright may have only spent 36 minutes on the pitch, but he played a big part in the fact that York9 FC has a point on the board to show for its opening match. Jim Brennan would lavish the league’s youngest-ever goalscorer with praise after the match, with Wright’s stock justly rising among Nine Stripes fans.

Brennan had to cope without big midfield additions Chris Mannella and Michael Petrasso this weekend, while international signings Gabriel Vasconcelos and Alvaro Rivero are expected to shine when they find their rhythm – but on the pitch this Saturday, it was a 16-year-old teenager from Brampton who was the brightest of the bunch.


All eight of the above players have put in at least one shift that resulted in plenty of positives, so it’ll be exciting to see how they all fare throughout the course of The Island Games. With every match carrying a heavy sense of importance in a seven game regular season, these are the kinds of athletes who can make the difference between a playoff push and an early flight home.

The Canadian Premier League will resume action this Tuesday with Pacific FC taking on York9 FC in a new evening time slot. The match will be available exclusively on OneSoccer.