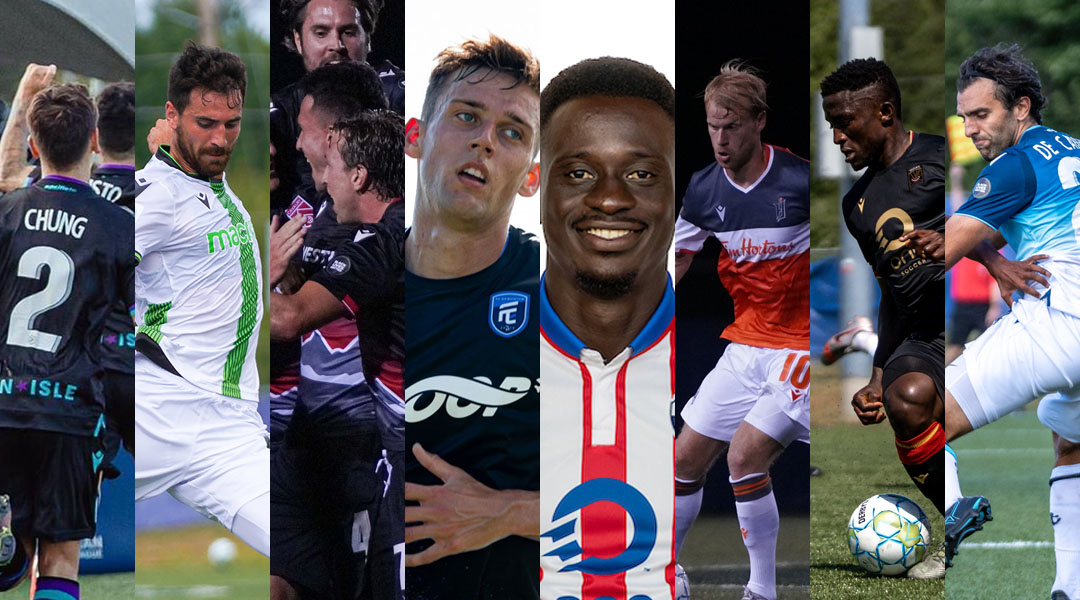 While some sides built around a fairly consistent core of players, other clubs underwent near-total overhauls as they sought out improvements across all areas of the pitch. Without further ado, let’s see which returning faces made the biggest impact after the first match (or two) of action for their side:

Atletico Ottawa – Nobody is new, but we’ll say Mohamed Kourouma.

Okay, there’s no returning faces for Atletico Ottawa because it’s the clubs first season, but if we were to extend this into players who came in from other CPL sides, it’s hard to look beyond former Halifax Wanderers forward Mohamed Kourouma: the 30-year-old scored the expansion side’s first-ever goal after a beautiful run by Vashon Neufville, getting 54 touches on the ball and contributing in a big way to the expansion side’s hot start.

Last year saw Kourouma make 32 appearances for Halifax across all competitions, providing four goals and four assists for the east coast side. While he was criticized for his shot area selection last season, he got things off to a bang from a close range effort this time around – though his other two efforts did fall outside of the box.

The six-foot-two Calgarian featured for the full length of both of Cavalry FC’s matches so far, and he made his presence felt for all 180 minutes of action: winning fourteen of seventeen duels, nine of ten aerials, and scoring a staple Zator header against rival side Forge FC, it’s no surprise to see the Whitecaps 2 product continue to assert himself at the CPL level.

Last year, OneSoccer surmised that he would have won Defender of the Year if such an award existed, with the 25-year-old using his consistent league performances to catapult himself into the national team setup. Two matches into the seven game regular season, Zator looks to have kept up with the good momentum.

After having trialed with the Vancouver Whitecaps, Eddies fans were more than happy to see Canadian international Amer Didic return to the Alberta-based club well ahead of The Island Games.

The six-foot-four centre back couldn’t help his side keep a clean sheet, but he still put in a consistent defensive effort that saw him make thirty of thirty-one attempted passes in a match where good scoring opportunities weren’t exactly frequent. He was unfortunate to see a headed effort strike the post before he had to leave the pitch with a worrying-looking injury.

The Forge FC captain has led his squad with two solid performances in midfield, earning man of the match honours in the league’s opener against Cavalry FC. That match would see Bekker bag his first goal of the season with a quick diving header, with Bekker also playing an important (albeit quieter) midfield role in his side’s 2-0 win over the Eddies a few days later.

An honourable also goes out to former NYCFC midfielder Kwame Awuah, who put in a solid performance against Cavalry and then did what Bekker oft fails to do against FC Edmonton: score an absolute rocket from outside of the box. The Driftwood-area midfielder – who can also slot in defensively – has certainly impressed as a Forge FC standout.

There wasn’t a lot to separate between team captains Andre Rampersad and Alex De Carolis, with the 27-year-old defender perhaps edging things with a solid defensive effort that saw him win every duel and dribble that he took on, make a few key passes, and nearly even score a goal with an effort that was cleared off the line by Pacific FC’s Thomas Meilleure-Giguere.


Trinidad and Tobago international Akeem Garcia also made his presence felt when he came on as a substitute against Pacific FC, jumping in to the action up top and earning his side a penalty in the game’s final minutes. That penalty was converted by Ibrahima Sanoh, rescuing a point for Hart.

After impressing with Pacific FC last season, 21-year-old Canadian defender Kadin Chung started the new season off with a busy defensive performance: he won more duels (13) than anyone else at The Island Games in a single match, won every aerial battle, and won possession no less than nine times on the ground.

What’s more, he also linked up with the club’s best newcomer so far – Marco Bustos – no less than 25 times. Expect that to be a key connection if Pa-Modou Kah is going see his side make a postseason push.

The tough ball-winning midfielder was a staple member of the Nine Stripes midfield last year, and he set the tone for 2020 early: Di Chiara goes in hard for challenges (which, to be fair, did earn him a yellow), has a great eye for passes, made an impressive 15 recoveries, and won the game-tying penalty which he also fired beyond Atletico Ottawa goalkeeper Nacho Zabal.

He’s not a selfish player, either: an in-swinging quick cross from Di Chiara came inches away from a finishing touch, with the 28-year-old consistently looking to create danger against Atletico Ottawa. There are also aspects of Di Chiara’s game that don’t directly translate into statistics: he draws players to him, moving them out of position as he forces his way down the pitch. That’s the kind of energy you want in midfield.

While Winnipeg-born Dylan Carriero was the only member of the inaugural season roster to start in the 2020 campaign, it was 25-year-old Ghana-born midfielder Raphael Ohin who impressed most from the returning faces: coming on as a substitute for the second half, he made a handful of recoveries, won most of his duels, and got a solid 34 touches on the ball – more than double Carreiro.

Ultimately, it was a tough time for both returning faces and new for Rob Gale’s side: Cavalry FC had already played a competitive match, and prevented Valour FC from getting the ball into good areas in the final third. Ohin made a solid case for a future starting spot, but it wouldn’t be enough to turn the tide of his side’s opening Island Games match.


Last year the Canadian Premier League impressed fans, pundits, and athletes alike with its high quality on the pitch. Many of this week’s impressive returning faces would likely be playing abroad if not for the launch of the domestic league last year, and it’s great to see that their quality is continuing to grow, too.

The Canadian Premier League will resume action tonight with Pacific FC taking on York9 FC at 8:00PM, with the match having been moved to a more favourable evening time slot thanks to solid production quality.