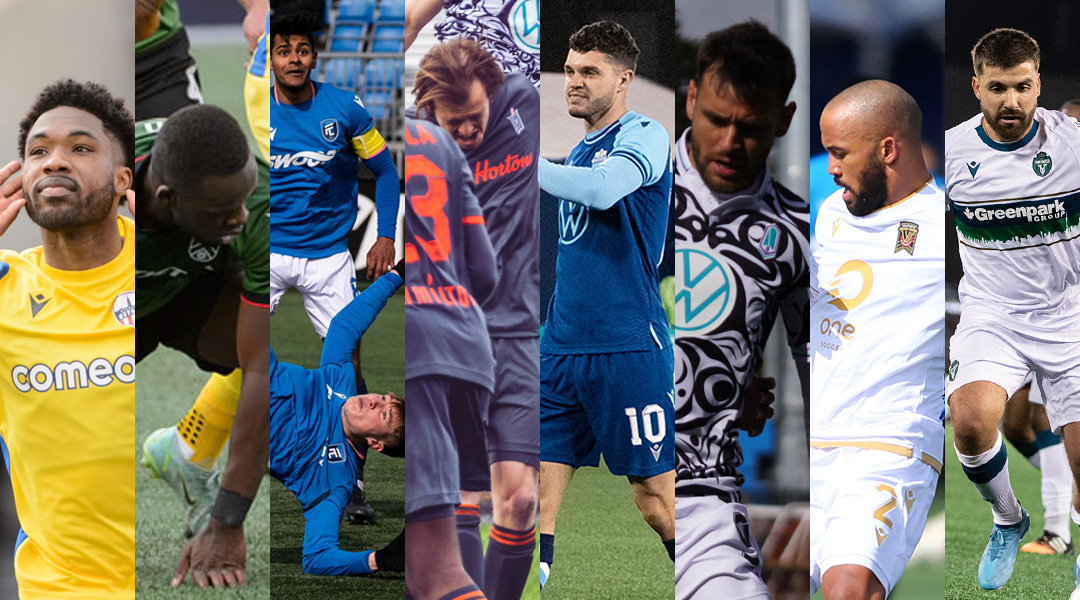 Earlier this week we took a look at each club’s best newcomer from the opening round of Canadian Premier League action, so why not take a look at the top returning player for each side? While each club from coast-to-coast added new faces ahead of the league’s fourth season (some more than others), there were a lot of familiar faces starting their 2022 campaign’s on the right note.

Without further ado, here’s our pick for each club’s best returning player from the opening round:

In a starting eleven packed with fresh faces following an offseason roster rebuild, there weren’t a lot of returning athletes to pick from. Brian Wright separated himself from the pack by scoring the matchwinner, continuing Atletico Ottawa’s head-to-head dominance over a tough Cavalry FC side.

With all-time Atletico Ottawa top goalscorer Malcolm Shaw substituted off by the time of a penalty decision in the 85th minute, Wright remained calm and collected as he stepped up against Julian Roloff before sending him the wrong way:

The striker had a healthy return of six goals last season, with his matchwinner from the weekend representing his second against Cavalry. Wright also completed two key passes against the visitors, and helped at the other end with a headed clearance too. All-told, it was a well-deserved moment in the limelight as he celebrated in a single match yellow-and-blue kit dedicated to Ukraine.

It’s no surprise to see the Cavalry’s top defender immediately make an impression: The CF Montreal loanee wasn’t expected to see a second season in the CPL, but the 21-year-old returned to a back three under Tommy Wheeldon Jr. and put forth a stellar shift. Yao led the team with 58 completed passes and eight recoveries, suggesting that 2021’s Foot Soldiers Player of the Year will be a backline highlight for the coming year, too.

Despite the Alberta-based side falling to a 1-0 loss, it’s fair to say Cavalry’s back three all looked solid: Daan Klomp and David Norman Jr. limited Atletico Ottawa to just three shots on target, but could do little to stop the match-winning penalty after a handball decision.

There could no other Eddie selected for this: Warschewski’s wonderstrike will be a CPL goal remembered for years to come. The York United loanee showed pure bravo to attempt an audacious overhead kick in the 95th minute, loosing an absolutely stellar bicycle kick that sailed beyond Jonathan Sirois and into the net as the match’s last touch.

“Put it in the Louvre. Frame it,” suggested Gareth Wheeler, and we have to agree: this was a work of art. If you haven’t seen it for yourself, do yourself a favour and watch the clip below.

The moment of magic is what will define an otherwise tough day at the office: it was an off-day for his passes, crosses, and dribbles, but he loosed two shots with both of them being on target – it just so happens one of them was the best goals seen in the league. Not bad for an athlete who was on the verge of quitting just over a year ago!

Given that the German forward led the league with seven assists last year while adding four to his own goal tally, he’s one to watch for an underdog side that are clearly ready to punch above their weight.

It’s no shock to see last year’s MVP and golden boot winner start off with a bang, though he did so in a role that few had expected. Brazilian midfielder Joao Morelli operated in a false nine role against York United, with the 26-year-old putting in a tireless performance that saw him prove problematic for the Nine Stripes all over the pitch.

The Brazilian finished the night with four shots to his name, including a well-composed penalty to bag three points for the Wanderers:

Hart revealed post-match that Morelli offered to play anywhere that his coach needed him to be, displaying a stellar team attitude that has continually paid dividends for the east coast side. Given that he signed a two-year contract extension after his golden boot winning season, CPL fans can expect to see Joao dancing for many games to come.

There’s no shying away from it: Forge FC had a tough day at the office, with injuries seeing several young faces put into the squad against the reigning champions. Outside of the defenders, no Forge FC athlete completed as many touches of the ball than Swedish midfielder Alexander Achinioti-Jonsson, who recorded 52 passes with a 90% completion rate before clawing a goal back with a finely-tuned header:

The big Swede has always been a key piece for Forge, and the 25-year-old will continue to be a core piece of the squad as the hammers dust themselves off and march onwards.

While he saw little of the ball overall, striker Woobens Pacius also looked good when in possession: he retained 100% passing accuracy, earning two fouls and putting forth a single key pass. Fans shouldn’t be worried about if his 2021 form will carry over – we’ll see some Woobens goals soon enough.

Nobody had a better opening five minutes this year than Alejandro Diaz, who put the Tridents in front of a visiting Forge FC side with a well struck finisher to get the ball rolling on their title defense. The Mexican striker would force Christopher Kalongo into two additional saves after that, completing one key pass and looking sharp for his third year in Langford.

Alejandro ‘Wero’ Diaz contributed no less than ten goals in the club’s previous campaign, where he also bagged just the second hat trick in league history. The former Liga MX striker signed a multi-year deal with Pacific FC, so expect some tidy finishes at Starlight Stadium for years to come.

Valour boss Phillip Dos Santos had a lot of familiar faces starting for him, but for our money Andy Baquero was the best of the bunch. The right-back looked solid on the flank against a tough man to mark in Azriel Gonzalez, who was mostly limited to long balls forward as a result.

Of course, it wasn’t just at the defensive end where Baquero impressed. The Cuban international has never shied away from getting forward, with Baquero firing home a tidy left-footed shot at the stroke of half time to bag his club’s first goal of the season:

Baquero’s defensive duties would see him record no less than eleven recoveries on the night, winning the majority of his ground duals. If not for a world-class goal from Tobias Warschewki with the last touch of the game, Baquero would’ve been celebrating three points and a matchwinning goal.

Nine Stripes midfielder Michael Petrasso was their best thing going forward during what turned out to be a difficult night. The 26-year-old made sharp runs aplenty down the left flank, offering a creative outlet that led to York United’s best scoring opportunities on the night. He was fouled three times in the process, while also winning no less than nine ground duels and completing two key passes.

In a more complete team performance, he’d have racked up an assist or two. An honourable shout also goes out to Noah Verhoeven, who has a knack for quiet consistency in midfield but provides an absolutely vital link between the defensive end and what the club offers going forward.

The 2022 Canadian Premier League continues with a second round of action this weekend, with FC Edmonton kicking things off as it hosts York United on Friday. The opening weekend of action saw red cards, penalties, and plenty of drama, so it’ll be exciting to watch what unfolds next – and to see if the best returning players keep up their form, too.