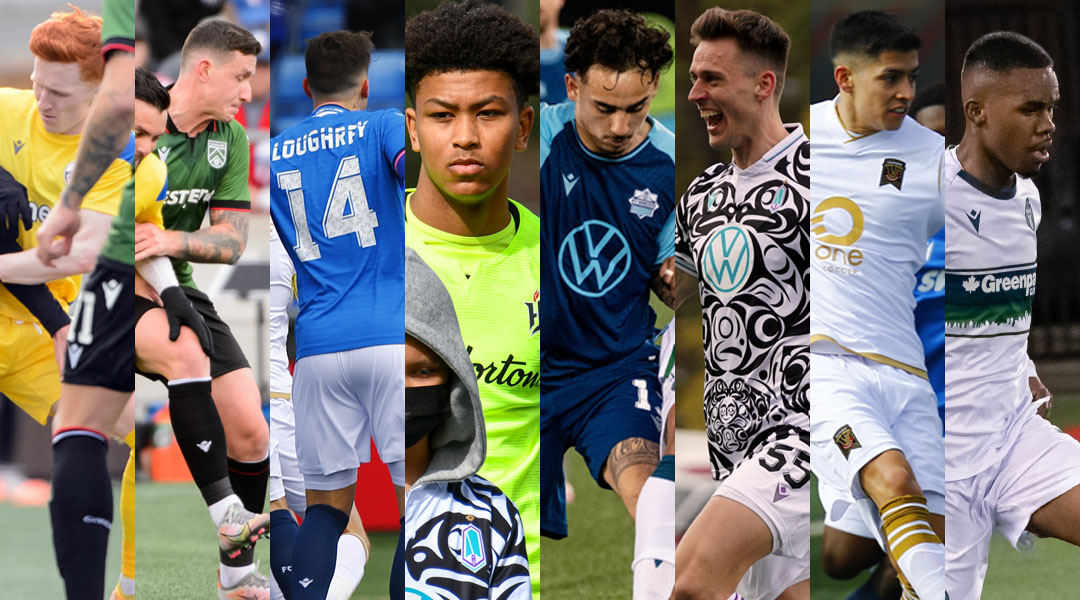 With the 2022 Canadian Premier League season having opened over the weekend, there’s already been plenty of drama spread across all four opening fixtures, with several club debuts occurring from coast-to-coast.

We’ve taken a look at the opening round’s best new player for all eight CPL teams in previous seasons, so we thought we’d give 2022 a go, too. Without further ado, here’s a look at our take on each CPL side’s best newcomer so far:

Atletico Ottawa – Ollie Bassett
Arriving to TD Place following a trophy-winning season with Pacific FC, English midfielder Ollie Bassett is a man who knows how to impress during a CPL debut. His start for Ottletti was a great one: he showed fantastic vision to drop several aerial long balls on a dime for his teammates, and was calm in possession. Playing the full 90, he showed quick footwork and put forth a consistent, sharp debut for an Atletico Ottawa side in which he hopes to remain a starter.

The club’s opening win also saw Nathan Ingham collect a clean sheet and Maxim Tissot provide a solid, veteran presence on the left flank, but for us it was Bassett that stole the show.

This one was a bit of a toss-up between Fraser Aird and new team captain Charlie Trafford, who also put in a consistent shift. When Aird crossed Al Classico battle lines to join Cavalry FC, he was hailed as one of the best crossers by Tommy Wheeldon Jr – and in turn, looked lively on his debut.

Having put forth an industrious five goals and five assists for a beleaguered Eddies side last year, we knew both the potential and experience was there. Still, the proof was in the pudding after Aird launched a number of aerial balls, made several key passes, and even loosed a shot on target at Nathan Ingham for an all-around solid debut.

The former Rangers winger is looking like a great pickup for Cavalry FC and a good dangerman that can fly up and down the right flank in lieu of Mohamed Farsi, too.

Okay, who are we counting as new faces here? Azriel Gonzalez and Tobias Warschewski were with the club last year, but now arrive as loans from York United, so we’re not counting them. That makes Forge FC loanee Cale Loughrey the frontrunner as our best newcomer in an Eddies squad chock full of fresh faces.

Loughrey led the team in both tackles won (four – tied for third-most out of any team) and recoveries (nine), while also winning more duals than anyone else on the Eddies backline. The 20-year-old helped a young defensive end survive a tough first half under siege from a full-sail Valour FC side that had the wind at its backs, and he did it without complaint.

The former University of Alabama holding midfielder has transitioned into a centre-back role at the professional level, where he made his professional debut for Forge FC against Cruz Azul in February. All-told, the former League1 Ontario youngster is off to a strong start with an underdog side that certainly punched up hard last night.

Let’s face it, there were a lot of tough debuts for Forge in the opening weekend: Terran Campbell and Alessandro Hojabrpour got shut out by their former club, while 19-year-olds Christoper Kalongo and Kwasi Poku were thrown into the fire against the reigning champions due to injury concerns for the hammers.

While young Sigma FC product Christopher Kalongo may have conceded twice against the reigning camps, the 19-year-old still walked into a high-pressure situation and made three good stops in a pro debut against last season’s most prolific team. His improbable save against a fantastic Marco Bustos set piece was deemed best stop of the match, giving a silver lining for a Forge FC side that allowed six shots on target against the rookie recruit.

The number one transfer target for the Halifax Wanderers punched his weight on his club debut: the 23-year-old linked up superbly with the rest of the Halifax midfield, with fast footwork seeing the attack-minded baller nearly net a debut goal while also earning Joao Morelli a freekick just outside the box.

Both of Aidan’s two shots on the night were on target, with the midfielder pulling his weight in terms of recoveries, too. All-told, he’s looking like a crucial element for a Wanderers side that wants to offer more creative outlets beyond its star Brazilian.

An honourable mention goes out to full-back Zachary Fernandez, who finished tied at the top of the club for blocks and interceptions after linking up superbly with Cory Bent on the flank. In fact, both of their new young full-backs looked decent, as did late preseason addition Ryan Robinson.

There’s no question about it: if anyone can replace Lucas MacNaughton at Pacific FC, it’s Amer Didic.

The six-foot-four centre arrived from FC Edmonton hungry to win trophies, and the stalwart defender put in an absolutely superb showing on his debut against Forge FC last night. Didic was unmatched in the air, winning all four of his aerial duals – the last of which saw him net what would ultimately be the matchwinner for the Tridents:

Pacific fans may want to take note: when we talked to him about his aerial capabilities, he set a hard minimum of five goals for himself from set pieces this season. He’s off to a superb start up top, though he also proved organized at the opposite end, too. A little work on passing accuracy and this Pacific defender is well en route to more man of the match awards.

We know Diego was with the club in 2019 and 2020, but after taking a gap year in Chile with AC Barnechea we’re counting him as a new signing. The 25-year-old had an astounding 95% pass accuracy in his second debut Valour, leading the new faces with a total of 56 passes. Gutierrez also won a team-high two fouls for the side.

Phillip Dos Santos only put in two ‘new’ faces for his starting eleven, with the other being Matthew Catavolo. Given that Alessandro Riggi, Jacob Carlos, Matteo de Brienne, and Jonathan Esparza all got less than twenty minutes to make their mark, the verdict is still out on who the best reinforcement to the squad will ultimately be.

The Nine Stripes hosted the first match of the 2022 CPL season, though it proved to be an off-night for most of the clubs debuting athletes: Mamadou Kane had a quiet shift, whilst second half newcomers Osaze De Rosario, Oliver Minatel, and Mateo Hernandez had little time to make a proper impression.

19-year-old defender Eduardo Jesus showed good potential for a York United backline that saw him deal with fair bit of pressure, and given the circumstances the Brazilian appears to be settling in well with his new Canadian club. He was the only defender not to concede a foul on the night, and despite a difficult match overall he looks like a good pickup at the CPL level.

It’s clear that the Nine Stripes have a lot of high ceiling talent, though only time will tell who ultimately takes hold of the squad’s limited starting positions.

With only ninety minutes of action played for each club so far, there’s plenty of further opportunity for new signings to impress – and it’ll be exciting to see how they grasp those chances. The action returns this Friday as FC Edmonton hosts York United, where there’s been contrasting reports on whether the four Nine Stripes loanees might be able to play against their parent club.

Suffice to say, it’s going to be an interesting week for both the league’s newcomers and its intra-league transfers, too.