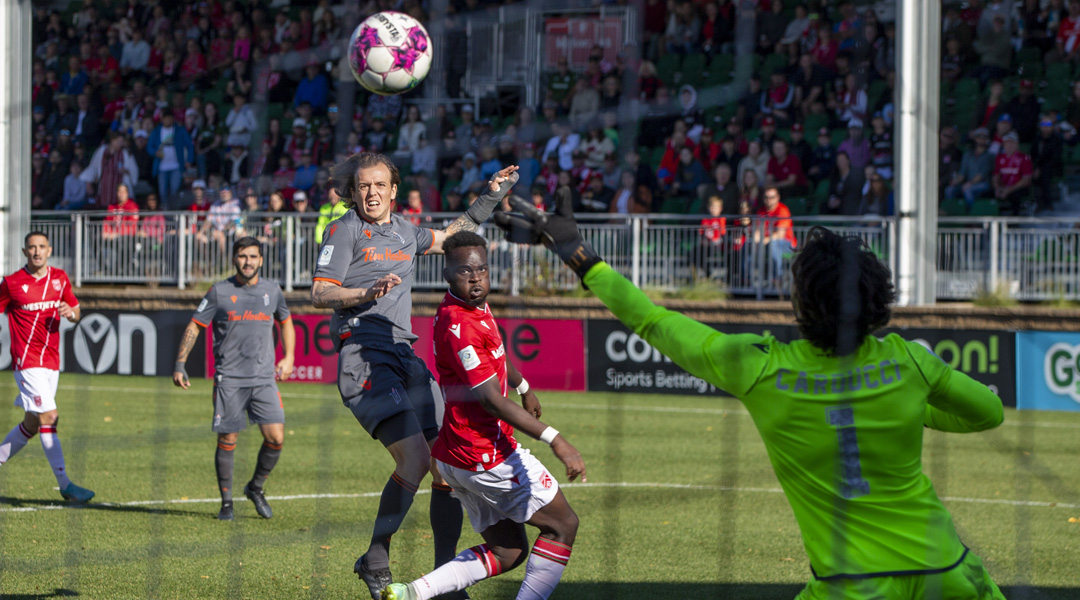 The first match of the 2022 Canadian Premier League playoffs promised to be an interesting clash: Cavalry and Forge seldom disappoint. Tonight saw the Calgary and Hamilton sides played to a 1-1 draw in the first leg of their semifinal matchup at Spruce Meadows.

Both teams started with their strongest team available, allowing for a quality match to be played. With the pair having won their final game of the regular season last weekend, confidence was high within both squads.

Forge nearly found the back of the net inside a minute as Alex Achinioti-Jonsson hit a shot off the crossbar. With the Hammers coming out on the offensive in the first five minutes, a goal would have been the perfect reward for their start to the tie.

After the opening five minutes, the hosts got into the game a bit, making for a more even affair. Forge keeper Triston Henry slipped in attempting to clear the ball, with Joe Mason almost capitalizing on the error. Fortunately for the guests, the ball went wide.

Each side traded a big opportunity midway through the first half, as Tristan Borges had a shot stopped by Marco Carducci. The Cavs went the other way, with Henry denying Ali Musse to keep the score level. It was a frenzied minute of play, yet the goalkeepers played a huge part in keeping the score at parity.

Just a few minutes before halftime, Cavalry took the lead. Joe Mason got the ball on the wing with several teammates marauding into the box. Mason found Daan Klomp with his cross, the Dutch defender heading it past Henry to give the home crowd something to celebrate.

That was the lone goal of the half, but we would not have to wait for long to see the equalizer: it only took one minute after the restart for the two-time champions to level the score. Forge captain Kyle Bekker whipped in an excellent corner that was met by Woobens Pacius from point blank range. The striker’s header went past Carducci, ending his goalscoring drought. It was Pacius’ ninth goal on the season, and first since July.

After the leveler, the game got a bit intense as the hosts tried to retake the lead. Chances came from both ends once more, but no one was able to play the role of hero in the time that remained. The game did get a bit intense close to the end as there was a scuffle or two that did result in some yellow cards being handed out. However, none of Klomp, Borges nor Rama, all of whom went into the game on seven yellow cards from the regular season, got one. That leaves all three available for the second leg.

In the post-game press conference, Cavalry coach Tommy Wheeldon Junior played down questions about whether his squad was under more pressure going into next week’s decider. Instead, the Englishman claimed that Forge was under more siege due to them being the home team and is expected to win next Sunday.

Wheeldon Jr.’s opposite number Bobby Smyrniotis admittedly preferred a win, but now sees next week as a single match to determine who will make the final. However, he was happy with his side’s response. He did speak with them at halftime and reminded his players that they have beaten Cavalry this season and not to get overly upset for being behind.

When asked about the yellow card accumulation that was made public earlier today, neither coach seemed to have kept that in mind. While both were happy to not have any of the previously mentioned players get an eighth yellow card, it was not something that either put too much stress on.

The second leg will be played next Sunday at 17:00 ET, 15:00 MT at Tim Hortons Field. The Cavs did not win either of their two games in Hamilton this season, but now is their chance to claim what would surely be their most significant win in the Hammer ever.