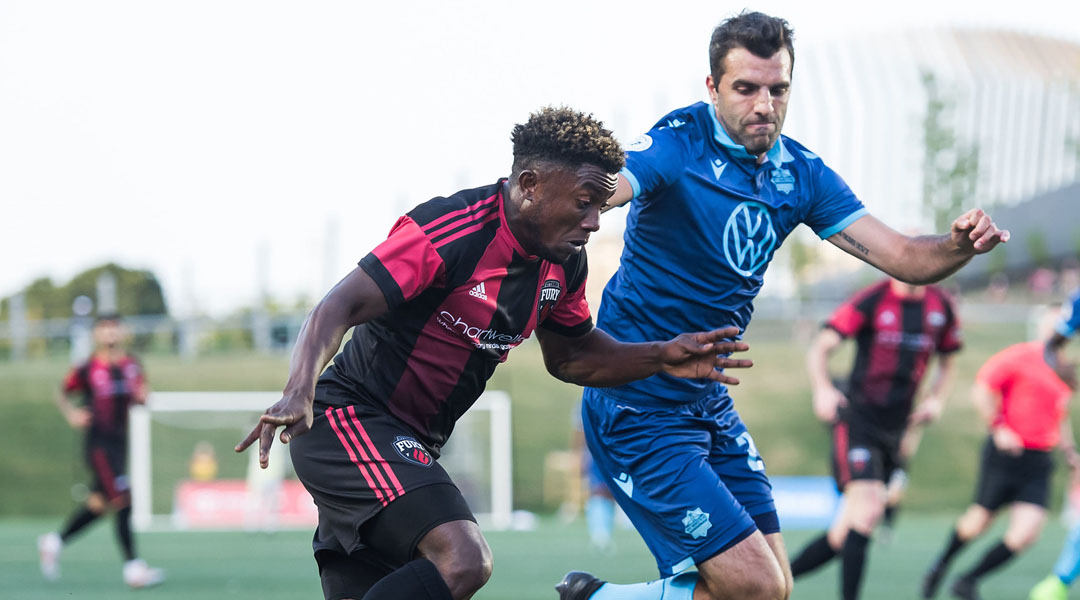 While he’s proven successful on the pitch, former Ottawa Fury winger Christiano Francois has proven unlucky off of it: for the third time in four years, the club in which he’s been contracted to has folded, forcing the Haitian international to seek stability with a new club once again.

The forward has contributed some 20 goals and 27 assists in 100 appearances for USL sides over the last four seasons, with Francois clearly a proven quality in the American league. After a pattern of club-based misfortune, however, the 27-year-old finds himself tired of the league’s instability.

He had signed a two-year contract with his latest side, Reno 1868, only for it to fold after half that length of time. A friend called him to tell him it was shutting down after he saw it on social media, before Francois got a call from the club itself. Having been burned thrice, Francois doesn’t want to play in the USL anymore.

When we asked if he’d be open for a return to Canada’s capital via Atletico Ottawa – a Canadian Premier League side that plays from the same home ground where he bagged five home goals for the now-defunct Ottawa Fury last year – he states that he likes Canada and wouldn’t mind going back there, with the caveat that he has large reservations about the league’s salary cap.

I think they still need time. I think it’s a good league for young players, but not veterans. I hope it gets better in the future, because salaries are very important.

The former Ottawa Fury man has kept in touch with some of his old teammates, some of whom have already broached the subject of the Canadian Premier League to him. While no CPL side has folded in its short history, clubs face strict rules about player salary with a maximum of seven internationals, many of whom must be vetted by the league’s official scouting partner, 21st Club.

While the league has never revealed its actual salary cap or the financial details regarding any staff or athletes from its eight clubs, PFA Canada has reported that more than half of its athletes make less than $22,000, with several earning less than $15,000.

Those aren’t exactly numbers that suggest Christiano Francois – who wrapped up a 2020 campaign by scoring six goals in sixteen appearances for Reno 1868 – would get an offer that suits the Haitian international.

Francois himself has already proven devastating against Canadian Premier League opposition, appearing in both Canadian Championship legs against the Halifax Wanderers. He bagged an assist away at Wanderers Grounds, and procured an equalizer in TD Place to secure a 5-4 aggregate victory for the Fury. Reflecting on the two legs, he recalls that the Wanderers were a good team to face, describing the side as being very direct with some quality players.

Like many CPL fans this month, Francois was tuned in to the recent Concacaf League action which saw Forge FC take on Haitian side Aracahaie FC, who play some twenty minutes from his hometown. The team secured a penalty shootout win against the reigning Canadian Premier League champions, with the 27-year-old telling Jonathan Jobin last week (en francais article here) that the result left him feeling very proud:

I spoke with some friends of the club and they told me they were going to win. I thought Forge was going to win because in Haiti, we don’t have as much preparation as in Canada. It’s difficult, but they won with their hearts. I’m so happy. I tell myself that if we had more money like Canada, the United States, or Mexico, we could do so much better.

It was just over a year ago when the winger broke into the Haitian national team, making two appearances against Curacao in Concacaf Nations League action. With international action set to resume next year, Francois sees that his international teammates based in Europe are currently playing and, if he wants a spot on the team, he needs to return to the fold soon, too.

He expects that he’ll find a new club soon, though with his trust in the USL having waned significantly it wouldn’t be a surprise to see him ply his trade elsewhere. If a Canadian Premier League club puts in an offer, it’s likely that Francois would need to accept a significant pay cut to make it work. As things stand, that doesn’t seem like a likely outcome.

Still, some domestic MLS athletes have made the move along with several of Christiano’s old Fury teammates have made this transition, so it’s not unprecedented – just very unlikely.

Atletico Ottawa has yet to announce any of its roster moves for the 2021 Canadian Premier League season, with the club having only confirmed the return of head coach Mista and the majority of its coaching staff.