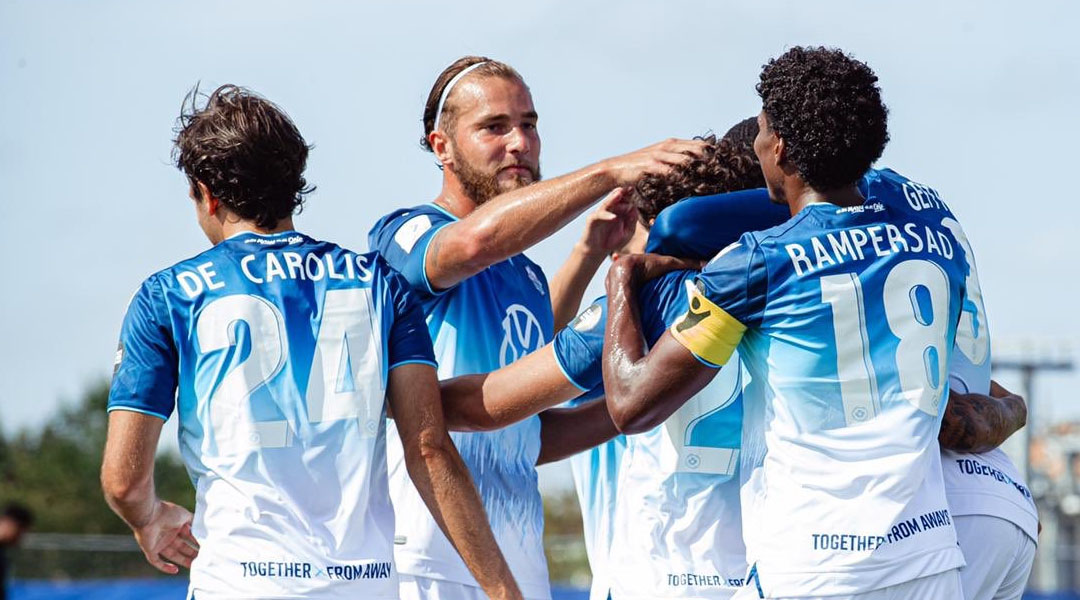 There were a lot of unknowns going into the Island Games’ only coast-to-coast clash of the regular season, with the Halifax Wanderers sporting a largely new roster and Pacific FC now under the helm of Pa-Modou Kah, who brought in some high profile newcomers in Alejandro Diaz and Marco Bustos at the cost of having one of the smallest rosters in the league.

Last year saw the two teams draw eachother twice in their last two meetings from the inaugural campaign. This year’s opening clash would see the trend continue, with a four goal affair ending with each side collecting a point apiece.

For those keeping count, that’s twelve goals from the first three CPL matches, with all of them ending in draws.


It was the east coast side who got off to a quick start after a bad touch from Pacific FC goalkeeper Nolan Wirth saw him foul Wanderers striker Cory Bent, giving away a clear penalty decision eleven minutes into the match.

Early fan-favourite Joao Morrelli coolly converted the shot from the spot, sending Nolan Wirth the wrong way to give the Wanderers an early lead.

Eight minutes later would see a great run from Victor Blasco result in the
Spaniard firing a quick cross to Terran Campbell, who skied his effort from a close range. Last year, the duo combined to be one of the most threatening pairs in the league.

The Wanderers couldn’t keep the lead for the duration, with a terrific chipped effort from Terran Campbell bouncing off the bar in the 68th minute. The rebound found its way to Zachary Verhoven, who slotted home a tidy finish between Beaulieu and Geffrard to make things level.

Both sides would bring on high-profile midfielders for the game’s final twenty minutes, with Kah bringing on Alejandro Diaz and Hart introducing Jamaican international Alex Marshall.

Despite the international additions, it was high-profile Canadian midfielder Marco Bustos who found himself with unexpected space in the box after a scuffed effort from Verhoven in the 75th minute, allowing the midfielder to twist sharply and fire a close range effort beyond former Impact keeper Jason Beaulieu.

Eight minutes later, Halifax Wanderers team captain Alex De Carolis – who was struggling with a knock – saw an effort cleared in front of the goal line by new Pacific FC defender Thomas Meilleur-Giguere. Minutes later, a cross from Ibrahima Sanoh would deflect off Thomas and rocket off the bar, with the Wanderers coming agonizingly close to an unorthodox equalizer.

With five minutes left in the match, Pacific FC’s Lucas MacNaughton attempted to clear the ball and fouled Trinidad and Tobago international Akeem Garcia in the process, with referee Myriam Marcotte pointing to the penalty spot. Big man Ibrahima Sanoh stepped up to the spot, with Wirth diving the wrong way for the second time in ninety minutes.

The drama wasn’t over yet, with Jason Beaulieu sliding outside of the box to collect the ball in the 90th minute. The resulting free kick saw former national team member Marcel de Jong come close to curling in a late winner for his side.

For the third Canadian Premier League game in a row, the match would end a four goal affair with one point award apiece. Both sides fought hard, with emotions running high for the only coast-to-coast clash of the regular season.

Pacific FC will be taking on York9 FC this Tuesday, while the Halifax Wanderers will contest against reigning Canadian Premier League champions Forge FC this Wednesday.