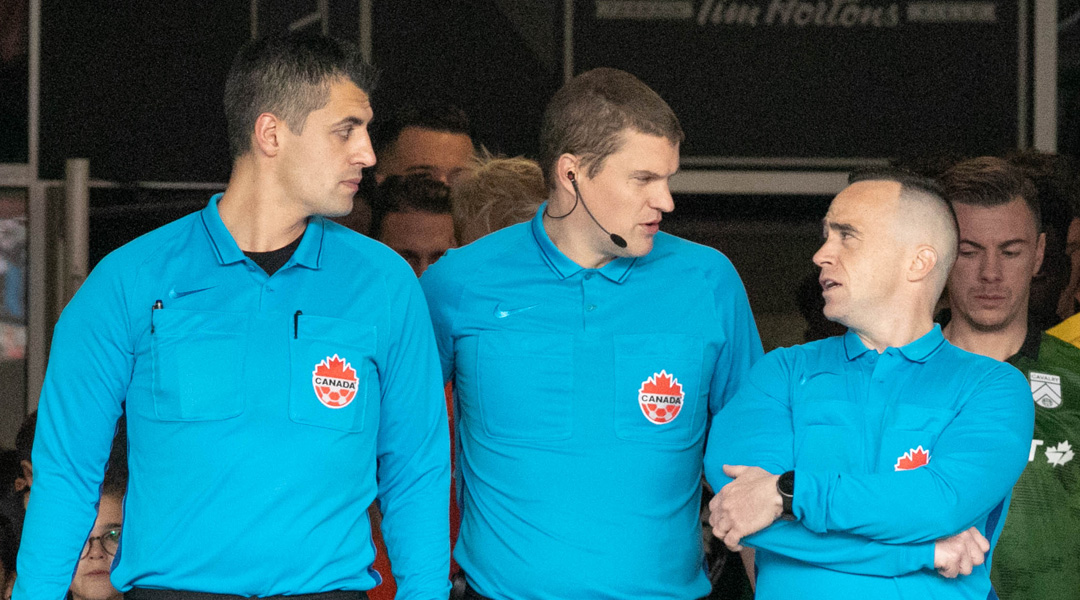 The first leg of the Canadian Premier League finals had over 10,000 fans in attendance, providing a boisterous atmosphere for what became ninety minutes of non-stop drama: with referee Pierre-Luc Lauziere handing out two red cards, there’s been no shortage of debate surrounding the game’s officiating since the conclusion of the first leg.

Interestingly, the match has attracted a viewership that also includes a few Canadian Major League Soccer players. Columbus Crew’s Jordan Hamilton and Chicago Fire’s Raheem Edwards – both formerly of Toronto FC – took to Twitter to share their view on the first leg’s officiating and Lauziere in general:

Hamilton’s tweet immediately picked up traction online, with Edwards chiming in that the very same referee had also given him his first career red card. For its part, Forge FC has confirmed that it will be appealing the red card that sent Tristan Borges off to take an early shower, though there’s no telling if the CSA will do a reversal given that he had, indeed, kicked out at Jay Wheeldon in a retaliatory nature.


Both players are correct in that Lauziere gave them their first career red cards: Edwards received his marching orders from Lauziere during added time in a 2-1 Toronto FC Canadian Championship loss to the Ottawa Fury in 2017, while Hamilton received a straight red for abuse in the 94th minute of a USL Championship match between TFC2 and New York Red Bulls 2 that same year.

Edwards, 24, will see his $70,250-per-year contract with the Chicago Fire end in conjunction with the calendar year. He didn’t make the matchday squad for Chicago during the club’s last eighteen games of the season, leading some fans to speculate that the Toronto-born midfielder is eyeing the league because he may be calling it home in the near future.


In any event, it shouldn’t be surprising that some MLS players are tuning in to watch the burgeoning league: after all, Halifax Wanderers coach Stephen Hart made mention earlier this year that he was fielding calls from players who had taken to the pitch for him during his tenure with the Canadian national team to discuss the high level of play in the CPL:

I had a couple of the players that played for me, with Canada, they called me after the first, let’s say, ten games. They said: boss, you know, we thought it would take 2-3 years to reach a certain standard, but there are some very good games being played here.

Whoever may be tuning in to watch the second leg, the red cards from the first leg mean that as things stand it won’t feature the likes of Joel Waterman or Tristan Borges, the latter of whom currently leads the league’s golden boot race. Cavalry FC has not made any mention of appealing Waterman’s straight red for his penalty-conceding handball.

The second leg of the Canadian Premier League finals will take place on November 2 at Spruce Meadows. OneSoccer subscribers can tune in for a livestream of the game complete with pre-and-post match analysis, with CBC Sports offering a TV broadcast for those willing to wait for a delayed tape of the match.