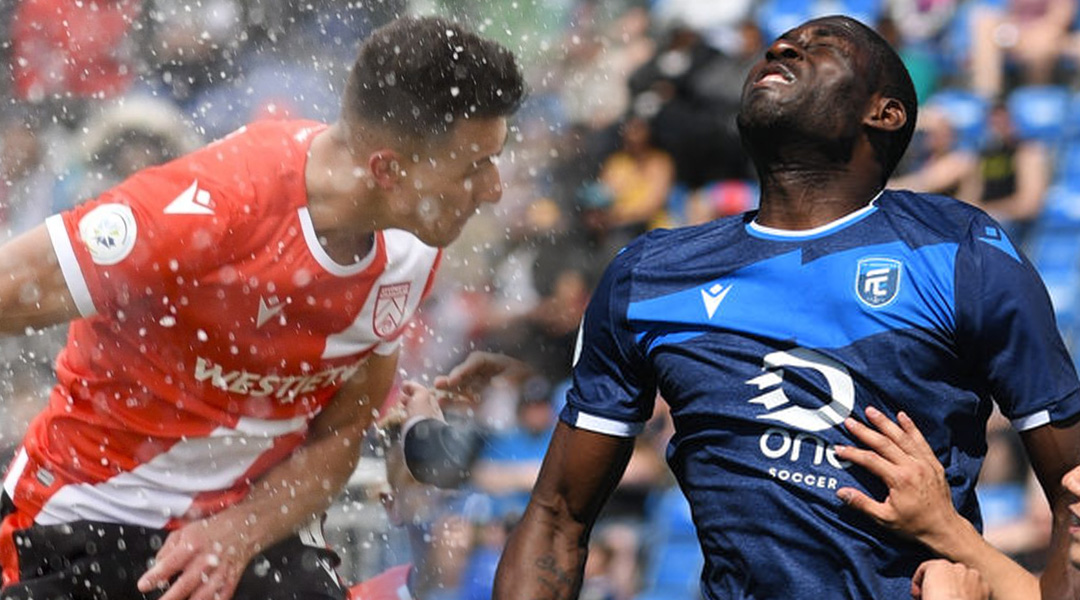 Today will see the Canadian Premier League deliver its first-ever Al Classico, which is the fan-made (and league adopted) nickname for the match between Alberta-based CPL sides FC Edmonton and Cavalry FC. Beyond local bragging rights, it’s set to have huge ramifications for the spring season as a whole, as Cavalry FC would establish themselves as runaway leaders if they can collect three points at home.

Tommy Wheeldon Jr.’s Calgary-based team have yet to lose, winning their opening three CPL matches and fielding a rotated squad in the Canadian Championship that handily beat Pacific FC 2-0. None of their opposition have found a good counter to their high-pressing mentality and ruthless set pieces, which have produced four of the club’s five league goals so far.

If anyone can find a way to stop Cavalry’s dangerous attack, however, it’s FC Edmonton. Jeff Paulus’ team has only conceded one goal in two games of league play, though Edmonton hasn’t exactly found its scoring roots, either. Still, with Cavalry FC having played a midweek game, one feels that FC Edmonton have the advantage as they travel to Spruce Meadows.

In this week’s Al Classico matchup, the club may be without the presence of defender Amir Didic, who would be a big miss. Luckily for FC Edmonton, it has other tall, strong players at the back, and they’ll be crucial to help keep Cavalry’s dangerous set pieces at bay.

FC Edmonton coach Jeff Paulus believes that the other five Canadian Premier League managers will be rooting for The Eddies, and with good reason: a fourth win in a row for Cavalry FC will see them take a huge lead in the spring season standings. A win against FC Edmonton would put them five points ahead of second-placed Forge FC, and with a game-in-hand to boot.

Bigger picture, this is important because, if Cavalry gets the result, it looks like they’ll run away with the Spring Season. Every team will be rooting for us in this one.”

It seemed oddly fitting, in a Canadian way, that it snowed during Cavalry FC’s home opener against York9 FC. The weather leading in to the Battle of Alberta hasn’t been great since then, with plenty of rain turning the Spruce Meadows playing surface into a fairly uncooperative pitch.

For Paulus, it means his players will have to rely on sheer force of will instead of playing a beautiful game:

I don’t think you are going to see great football being played out of the back and these great touches and whatnot. It’s going to be difficult when it’s already going to be poor conditions and you’re playing on a poor surface at the moment. This game is going to be as much about passion an emotion as it is going to be about tactics. It’s about what players are hungry and want it more.”

Whatever happens in Al Classico, it’s going to be a great start to what is sure to be a heated rivalry. Cavalry FC has never tasted defeat through Canadian Premier League, Canadian Championship, and preseason play, so losing to the club’s provincial rivals wouldn’t be a fact forgotten quickly. For FC Edmonton, a loss means Jeff’s side hands a good spring season lead to their rivals, while a win puts them right back in contention near the top of the table.

In essence, both sides will feel that it’s a must-win. The recipe is certainly there for Al Classico to live up to such an outrageous derby name, and one can safely expect Spruce Meadows to witness some contentious moments – and whatever magic the water-battered pitch will allow. As they say, a Canadian league begets Canadian weather.

Editor’s Note: I just made that up. Nobody has said that.

Fans can tune into Al Classico via OneSoccer, which is a global streaming service that will cover every Canadian Premier League and Canadian Championship game this year, along with every home tie of the Canadian men and women’s national team. Next year, the service will expand to stream League1 Ontario games, too.