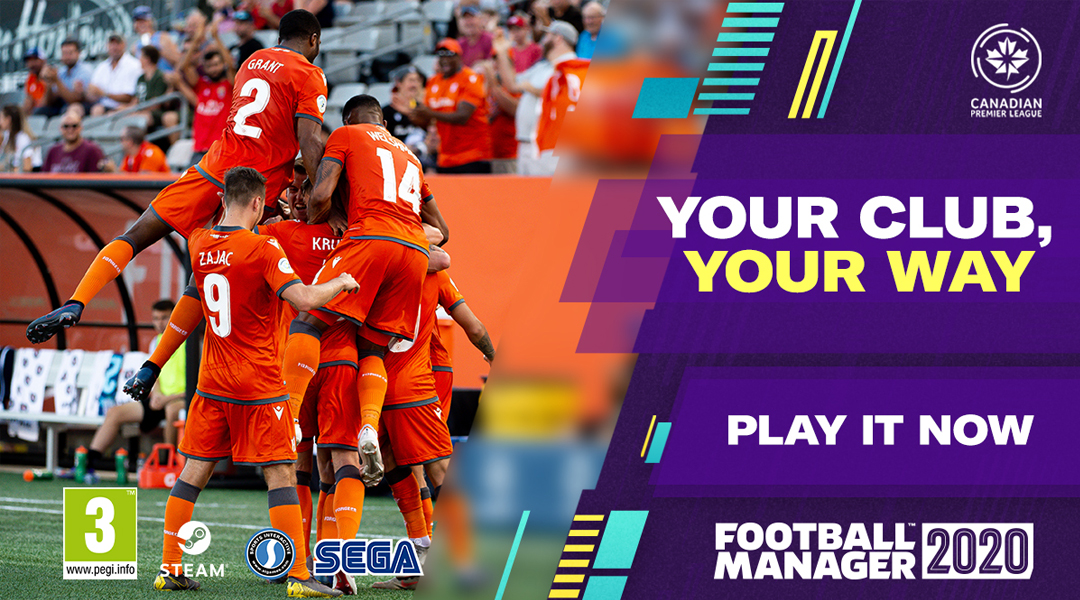 For the first time ever, the Canadian Premier League will feature as an official addition to a popular videogame franchise: today, the league is available to play in digital form through a free DLC update for Football Manager 2020.

Both the Canadian Premier League and Sports Interactive have just announced that the new officially-licensed DLC update will allow gamers to lead one of the seven CPL sides to glory (or defeat) as they make their own signings and deploy their own tactics in a bid to hoist the North Star Shield. The new content has been made available to download immediately.


Football Manager 2020 introduces a focus on long-term club visions into the franchise, so would-be managers will find themselves tasked with things like trusting the kids at Pacific FC or deploying Brennan’s favoured ball-forward tactical philosophy at York9 FC. There’s also plenty of quality of life improvements introduced by the latest iteration of the sports simulation franchise, too.

Of course, this isn’t really the first time the Canadian Premier League has been in the franchise: an unofficial Football Manager modification produced by Edward Hon-Sing Wong has been a popular download since 2019, and also includes several other leagues like League1 Ontario, the PLSQ, and more.

We took a gander through the modification to see how it thought the first five years of Canadian Premier League action would unfold, but it’ll be interesting to see how the officially-licensed content differs: whether the developers can incorporate a more accurate league schedule, a CPL-U SPORTS Draft, or league rules requiring clubs to accumulate 1,000 minutes of domestic U-21 action remains to be seen.


In any event, it’s a landmark moment for the league as a whole: with the Canadian Premier League now officially added to Football Manager 2020, the league will be exposed to countless gamers both in Canada and beyond. With OneSoccer able to bring live streams of the league to curious eyes, today’s step into the digital gaming realm could spell increased interest in the young league.

One can assume that today’s announcement means that the Canadian Premier League will be a regular part of the popular videogame franchise going forward, too.

The league has yet to be included in FIFA, though the franchise’s creative director said he’d love to include it if the were was enough fan demand. Meanwhile, one intrepid fan has made a full-scale Pro Evolution Soccer CPL mod that incorporates the league into FIFA’s rival series.

With the free DLC available immediately, fans who want to take a crack at the Canadian Premier League can do so right now by clicking here, assuming that they own Football Manager 2020 already. If not, it’s available here, and evidently isn’t a bad Christmas gift idea for the dedicated CPL fan.