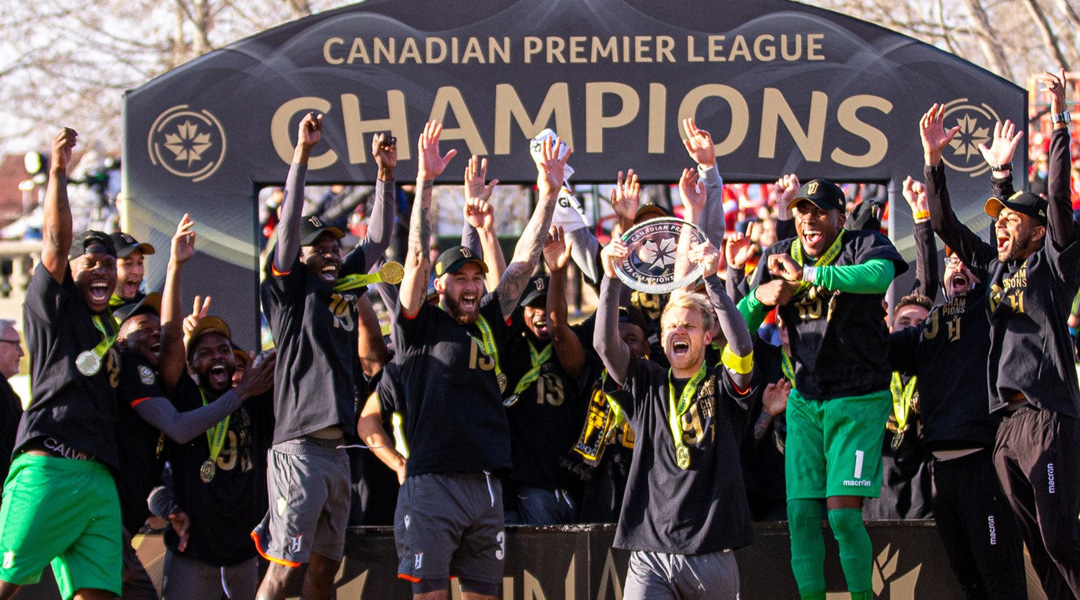 After playing second fiddle to Cavalry FC for both split seasons of the inaugural Canadian Premier League season, Hamilton-based club Forge FC has fought hard in the two-legged finals to lift the North Star Shield as the first-ever league champions.

It’s the first championship win the city of Hamilton has seen in twenty years, with the Ti-Cats last winning the Grey Cup in 1999. Given how dominant Forge FC proved in the first year of CPL action, there might not be such a large gap next time.


Traditionally, the CPL finals will play out between the winners of the respective spring and fall seasons. Since Cavalry FC laid claim to both, Forge FC – the team with the most cumulative points from both seasons behind Cavalry – earned entrance to the finals.

The first leg took place in Hamilton last week, with Forge FC coming out 1-0 winners in ninety minutes of action which saw two red cards (one of which was overturned), three struck crossbars, and a single goal from golden boot winner Tristan Borges.


Tonight, Forge FC survived a chippy first half which saw Cavalry FC finish with a handful of half-chances and only one shot on target in total. The second half eventually opened up with Cavalry FC on the attack, with the likes of Dominique Malonga and Sergio Camargo causing trouble as the second half wore on.

The second leg certainly got chippy, with referee Alain Ruch handing out seven yellow cards in all. Dominique Malonga had a great chance in the 52nd minute, connecting with a close range cross but seeing his ball bounce into the hard pitch and right over the net.


Forge FC continued to sustain an all-out attack from the Calgary as the match wore on, with goalkeeper Tristan Henry doing a fantastic job to read the plays and cut them out as they developed. In the 92nd minute, Zator found himself free in the Forge box but fired his close range effort high and wide.

It just wasn’t meant to be for the Calgary-based club: as it pushed everyone forward in added time, Forge FC found itself on a quick counter after a penalty no-call decision that is sure to be a talking point. A two-on-one situation with Cisse and Choinere against Marco Carducci developed, and an unselfish pass from Cisse to Choinere sealed the deal: the 22-year-old who came to Forge to score high-profile goals buried the chance, securing a 2-0 aggregate win for Forge FC.

While there are a few blossoming rivalries in the seven-team league which include Al Classico (Cavalry and Edmonton), the 905 Derby (York9 and Forge), and the coast-to-coast clash (Pacific and Halifax), there’s nothing that matches the intensity and ferociousness of Cavalry and Forge, which has quickly become the league’s best naturally-developed rivalry.

Both finalists were buoyed by a pre-existing squad cohesion right from the get-go, with Forge FC bringing in several former Sigma FC players and Cavalry FC bringing in many from the Calgary Foothills. Of course, laying their success on solely that premise is a gross oversimplification to the recipe for their collective achievements.


Forge FC has had a landmark first season: despite finishing in second-place across both the spring and the fall season, the club qualified for the CONCACAF League and defied expectations by fighting its way beyond Antigua GFC, a Guatemalan club founded in 1958. Finishing as the first-ever league champions, of course, is the fairytale ending that Forge FC fans had hoped for ever since the league kicked off some seven months ago.

When the Hamilton-based club takes to the pitch next season, its players will be wearing kits with a special ceremonial badge recognizing their achievements from the inaugural campaign. By virtue of claiming the inaugural Canadian Premier League title, Forge FC has also qualified to participate in the CONCACAF League once again next year, too.

Whatever happens for 2020, history has been made in 2019: Forge FC has become the first-ever Canadian Premier League champion, and that’s an honour the club will have forevermore.