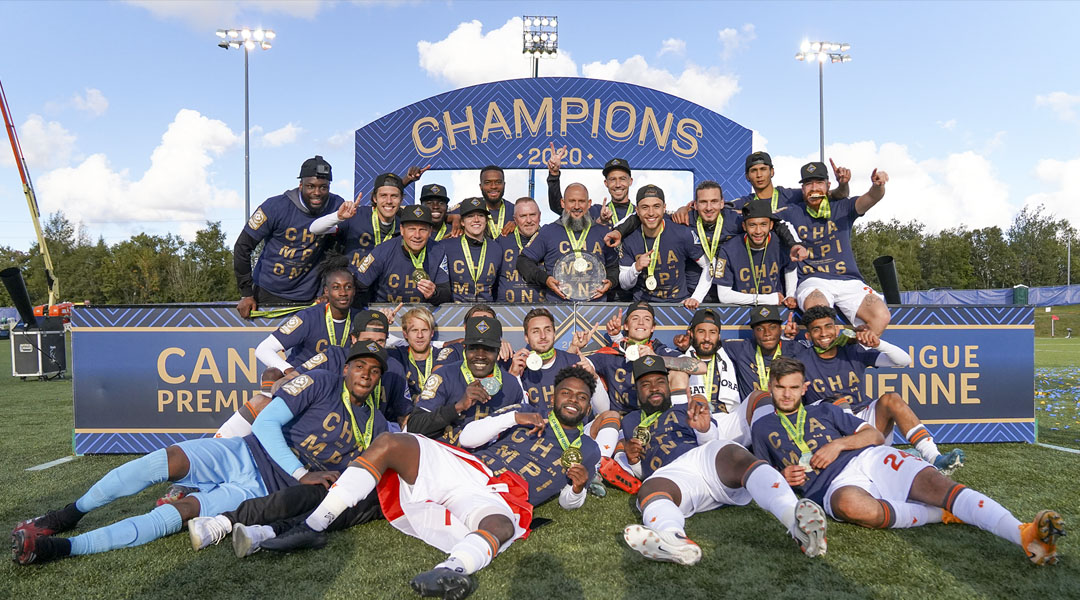 Canadian Premier League favourites Forge FC have done it again: the inaugural season winners have bested a much-transformed Halifax Wanderers side to retain the North Star Shield and finish the Island Games season crowned as champions once again.

Forge FC finished third overall in the regular season with a 3-3-1 record, with the club enforcing a score-by-committee approach built around the strong midfield play of team captain Kyle Bekker. The side were met with tough competition against an in-form Wanderers side who fielded a battle-hardened team with the league’s top two goalscorers looking threatening under Stephen Hart.

The final match in Charlottetown saw a cagey first half give way to some Forge FC dominance in the second, with Alexander Achiniotti-Jonsson’s headed effort providing a go-ahead goal for the reigning champions and Tissot forcing a rare Oxner error to provide an insurance goal in the ninetieth minute.

At the final whistle it was Forge FC who won the right to hoist the North Star Shield, retaining their championship status for another year running. On top of that, Forge FC has now qualified for the Canadian Championship final and the 2021 Concacaf League, too.

Here’s how the final match of The Island Games went down on sunny afternoon at the UPEI Artificial Turf Field:

Stephen Hart played top goalscorer Akeem Garcia up top with second-place golden boot leader Morelli behind him, with Jamaican international Alex Marshall on the right, Rampersad and Sissoko in the middle, and Alessandro Riggi on the left. The successful centre-back partnership of Geffrard and Schaale continued, with Canadian U-21 Player of the Year nominee Chrisnovic N’sa on the right and Mateo Restrepo on the left. As expected, local Haligonian Christian Oxner started between the sticks ahead of the east coast club’s first-ever CPL Final.

Bobby Smyrniotis elected to run a front three of Grant, Babouli, and Choiniere (who scored in last year’s CPL Final), with Bekker, Sabak, and Jonsson in the middle. Former NYCFC man Kwame Awuah came in as a left-back for the side, with Samuel on the right and the familiar pairing of Krutzen and Edgar in front of golden glove nominee and clean sheet leader Triston Henry.

The first big chance of the game came from a misplaced pass from Andre Rampersad, with Babouli forcing the ball into the box but then dallying on it for too long, eventually firing a shot from a wider position which was all too easy for Oxner to collect.

Garcia then did what he’s done so well all season, playing off the shoulder of Bekker and nearly finding himself at the end of a great ball before Bekker managed to get in a potentially goal-saving block. The first half would be a quiet one for the golden boot leader, with Forge FC stifling his opportunities well.

A high tempo game gave away to a defensively-tight opening forty-five minutes, with two big potential handballs: the twenty-fifth minute saw a potential handball call on Geffrard as Choiniere ran into the box, but referee Juan Marquez declared that the ball had gone over the line and called for a goal kick instead. Fifteen minutes later, Riggi fired off a shot outside of the box that immediately struck the elbow of Edgar from one foot away, but once again no call was forthcoming as Henry stepped in to a point-blank save against Garcia.

The second half nearly saw Forge FC immediately bang in a go-ahead goal, though Oxner proved up to providing a stop to keep the scores level as the second half found its footing. Forge continued to look threatening with a string of set pieces that resulted in four corners in a row, with the Wanderers finally able to clear after the fourth near-post delivery from Bekker.

A fifth corner minutes later would see Oxner punch away Bekker’s corner, but Babouli immediately played the ball right back in to the far post for Alexander Achiniotti-Jonsson to head home the go-ahead goal:

Forge FC continued to apply the pressure with the Halifax defense finding itself overwhelmed as Sabak broke through on the wing and delivered a superb ball that the Wanderers managed to clear.

The sixty-fourth minute saw Garcia and Edgar race for the ball, with the veteran defender dragging down the attacker and collecting a yellow for stifling the playing opportunity.

The resulting freekick from Morelli went well high of the net, with the Wanderers struggling to pose an offensive threat. A bad giveaway saw Babouli play in Choiniere, but golden glove nominee Christian Oxner made a gigantic save to keep his side within reaching distance of an equalizer.

A moment of absolute magic from Mo Babouli saw him play the beyond one defender, nutmeg another, and run into the box to force an ever-busy Oxner into yet another point blank save.

Forge FC celebrated their title honours on the pitch a little bit early when a bouncing freekick from substitute Maxim Tissot caught Christian Oxner off-gaurd, with the ball deflecting off the goalkeeper into the net to give Forge FC an insurance goal in the 90th minute.

At the final whistle, there was only one clear winner by way of the second half: Forge FC, the first-ever back-to-back champions of the Canadian Premier League.


Forge FC made history last year by becoming the ‘forever first’ side to hoist the North Star Shield, which means today they put themselves in the record book yet again by becoming the first CPL team to record back-to-back domestic league wins. Smyrniotis retained the core selection of last year’s championship winning squad on his path to the Island Games title, adding smart acquisitions like Maxim Tissot, Molham Babouli, and Paolo Sabak to a roster which had the depth, grit, and determination to come out of a congested bubble tournament as absolute champions.

Halifax Wanderers fans will enter the offseason knowing that the east coast side have completed a night-and-day transformation from where they were last year: from dead last in the league, Stephen Hart has build a highly competitive side that came within 45 minutes of winning a North Star Shield. Come 2021, the Halifax-based side will enter as expected favourites to challenge for the league title.


Just like they did last year, Forge FC is expected to don kits wearing a ceremonial badge to recognize their title holding status for the 2021 campaign, too. The season hasn’t concluded for the hammers yet, either: the side will resume 2020 Concacaf League action this October, with a Canadian Championship matchup against Toronto FC also set to be scheduled, too.

Forge FC has also qualified for the 2021 Concacaf League, though depending on how they perform in this year’s iteration of the tournament (or the Voyageurs Cup) they could qualify for the Concacaf Champions League instead. If that happens, it is believed the Halifax Wanderers would be handed the Concacaf League spot instead.

All told, Forge FC has set the gold standard: with two seasons of Canadian Premier League action now concluded, the Hamilton-based side have yet to be beaten when it comes to title honours. Coach of the year nominee Bobby Smyrniotis has built a side that wins when it matters most, and it’ll be interesting to see if he can retain the majority of his roster once again ahead of a 2021 Canadian Premier League season that league commissioner David Clanachan is hoping can start in April.

For now, however, one thing is clear: after been sequestered in a bubble tournament since early August, his playing squad will by enjoying a nice night out in Charlottetown to responsibly celebrate a truly remarkable moment in Canadian soccer history.