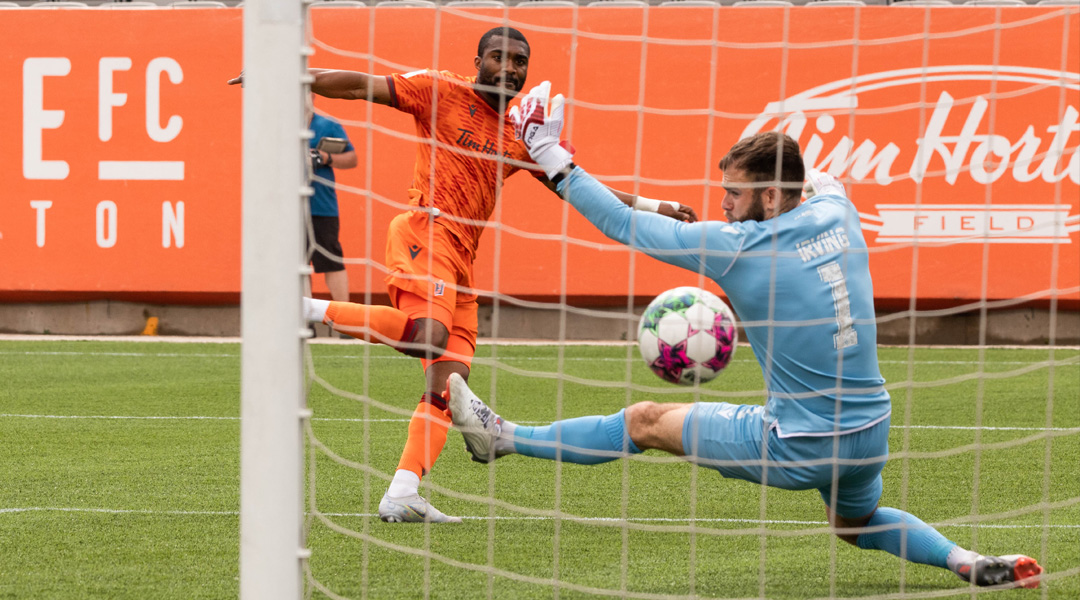 Forge 3-0 Pacific. All Hosts in the Repeat of December’s Final

It was a dominant display from Forge FC as they comfortably defeated Pacific 3-0 in the repeat of last December’s final.

Both sides headed into this one off the back of unwanted results: Pacific falling in the capital to Atletico Ottawa, while Forge lost on penalties last week Saturday to Toronto FC in the belated 2020 Canadian Championship Final.

There was also a plethora of absences for both teams, particularly at the back. Pacific only registered four players on their bench for the tie, with the hosts bringing in Malcom Duncan (of Sigma FC) and Orlendis Benitez (Vaughan SC) on short-term contracts ahead of the match.

Forge came out of the blocks on the offensive, giving their guests little time to get into the game. They seldom had to wait for very long to hit the front foot. After a giveaway just outside of the box, it fell to Ashtone Morgan, with the fullback beating Callum Irving for Forge to go in front.

It only took a couple of minutes for the Hammers to double their advantage, with an excellent buildup out of the back. Following a series of passing, David Choiniere played the ball across to Tristan Borges, who tapped the ball home to make it 2-0 inside 15 minutes.

Pacific’s only big chance in the game came after 20 minutes, as Alejandro Diaz got past several Forge defenders before being thwarted by Triston Henry. The Tridents got into the game a bit more after this, but outside of Diaz’s effort they did not really test Henry.

In the second half, Pacific coach James Merriman had to move to his already curtailed bench as both Thomas Meilleure-Giguere and Djenairo Daniels needed to be replaced due to knocks. In the post-game press conference, Merriman did state that neither injury looks too serious.

The home side put the icing on the cake a few minutes from the end. Morgan ran through the Pacific defense before being brought down a few meters from the goal. Woobens Pacius, who already earned the assist on the first goal, converted in the ensuing penalty, wrapping up the three points.

Merriman did not look for any excuses in the post-game press conference, claiming that his side did not play for each other and did not start the game well. He also lamented that his team will need to do better to see a change of results, especially since his side have failed to win their last five in all competitions.

Morgan was more than pleased with his teammate’s showing in the game, stating that he thinks they sent a statement in the first 20 minutes. Those similar thoughts were echoed by the Forge gaffer Bobby Smyrniotis, who was satisfied with his side’s showing. When asked about his defensive rotation over the past several matches, he mentioned his players’ abilities to cover several positions on the field and know how to play where required.

Pacific will finish a three-game Ontario away swing in the provincial capital, where they will aim to get back to winning ways at York United. Forge, now winning their third successive league match and have gone four unbeaten, will head out to Wanderers Grounds to battle the HFX Wanderers. Both games will be next Sunday.