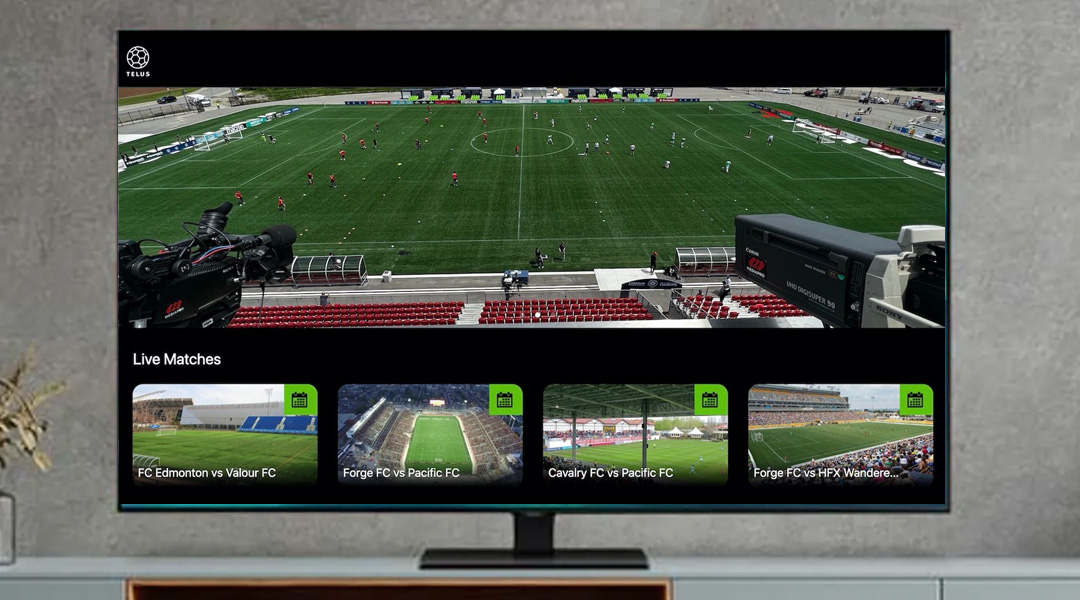 Canadian sporting fans will be able to watch all of this month’s Canadian Premier League matches in an all-new, digital manner starting this weekend – and it’s all for free.

OneSoccer owner MEDIAPRO Canada has announced a joint initiative between itself and a live sports technology startup called YBVR that will see the Telus Sports app include a fully-immersive, multi-camera Sports Metaverse viewing option spring up for all nine remaining CPL matches this year.

In layman’s terms, that means that CPL fans who download the free Telus Sports app can watch all of this month’s CPL matches across multiple devices with each game having up to eight different camera angles to choose from.

Viewers can watch the conclusion of this weekend’s regular season action and all five post-season matches through the new Telus initiative. For those who want more control over their viewing experiences or perhaps for fans who haven’t yet subscribed to OneSoccer itself, it’s a golden opportunity to tune in to the action as the fourth CPL season comes to a close.

The Telus Sports application is free to download on the Apple and Google Play stores, along with select Android TVs for TELUS subscribers on Optik TV and Pik TV. Viewers can also access the service on a web browser, too.

All four remaining regular season matches this weekend and all five playoff matches – including the CPL Final – will be available on the service, which is described as an interactive and flexible solution that pushes the technological boundaries for Canadian consumers.

“As soccer fever takes over Canada, the ending of this year’s season promises to be exciting, and TELUS, combined with the power of YBVR’s technology, will make it accessible for all Canadians,” promises YBVR CEO Hector Prieto.

The new initiative from Telus comes amidst the company’s support for OneSoccer in an ongoing CRTC complaint that Rogers declined to host the service because it would compete with Sportsnet.

While Rogers sees ‘limited appeal’ in working with OneSoccer, it looks like Telus – who offered a letter of support in the dispute and still maintains a live simulcast television channel for it – is still keen to go all-in on the partnership.

“By partnering together with YBVR and MEDIAPRO Canada, Telus is piloting next-generation technology for the Canadian Premier League and enhancing soccer’s impact on the Canadian landscape,” added Telus Vice President Amit Nag.

For its part, technology startup YBVR has worked with high-profile clients such as the Wimbledon and the Australia Open tennis majors, EuroLeague basketball, and even Real Madrid, putting the CPL in good company.

OneSoccer’s Oscar Lopez describes the three-pronged partnership as a new way to vault the viewing experiences to a new level from coast-to-coast. It won’t be the first time the streaming service has jumped into new technology, having been one of the first to implement virtual stadiums during the shortened pandemic season.

In just four years, the CPL has developed into a compelling and competitive league with a dedicated fan base from coast to coast, and TELUS and YBVR have shown that they understand the popularity of soccer among Canadian families and sports fans, at a time when Canadian soccer is reaching new heights – not just at home but at a continental and global level. We’re delighted to join the likes of Real Madrid and Wimbledon in engaging viewers through the latest in technological innovation.

Fans won’t have long to wait to see how the new high-tech streaming offering will perform, with Cavalry and Pacific playing tonight in a match that has ramifications on the regular season champion.

With the top four clubs set to finalize their league positions this weekend and playoffs coming shortly thereafter, it’s a great time to tune into the league in any manner one can – so kudos to Telus, YBVR, and OneSoccer for opening another option.