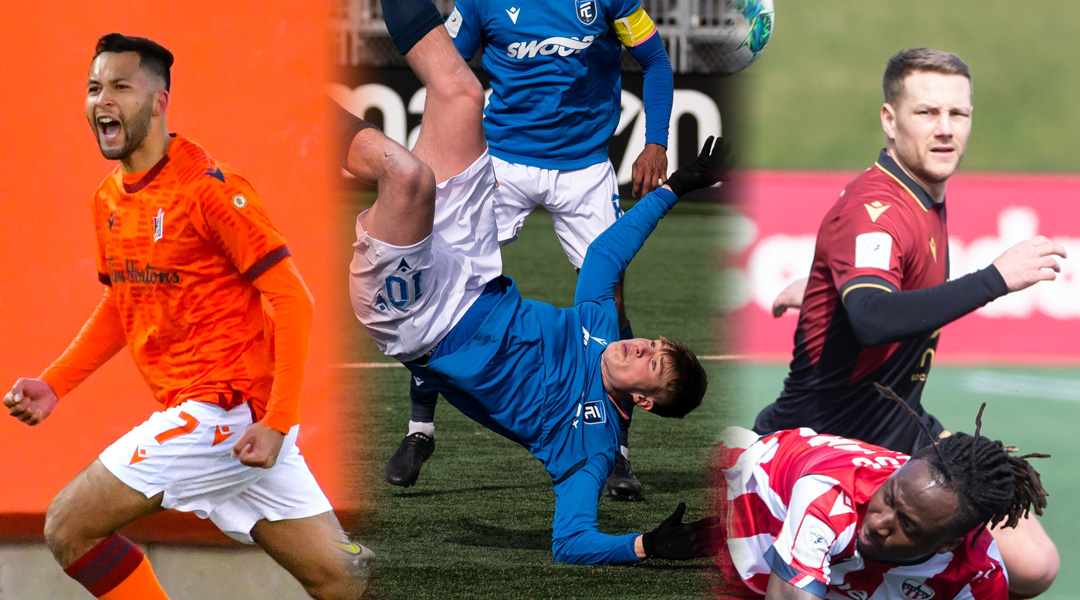 The 2022 Canadian Premier League season got off to a fiery start in April, and there were no shortage of phenomenal goals to be seen in the opening four rounds of action. It wasn’t easy to whittle them down to a shortlist of the top five, but we gave it our best.

The first coast-to-coast clash of the season would see the Wanderers trailing as the first half wound down, but midfielder Cory Bent pulled a delightful freekick out of a hat to square things up: beating Callum Irving to the near-side of the post with in inch-perfect set piece, the 24-year-old had every right to bust out a dance afterwards.

Expect goalkeepers to start sweating when Halifax earns free kicks for the remainder of the season. Will we see another Bent rocket? Evidently, he’s got it in his toolbox.

David Choiniere’s first of the season – and fourteenth for Forge – was one to remember.

The hammer were minutes away from dropping a home result to Cavalry when the ball wound up at the feet of the substitute forward. He immediately encroached into the opposition box and fired in one of the most beautiful curved shots ever seen in CPL history.

New Forge FC midfielder Alessandro Hojabrpour nearly broke the sound barrier with this rocket. Even though opposition goalkeeper Julian Roloff was well-positioned, there was little the goalkeeper could do beyond watching that ball nearly burst through the back of the net.

Sometimes a player just hits the ball perfectly, and this was one of those times.

It goes without saying that Alessandro Hojabrpour knows how to be in the right place at the right time, especially at Tim Hortons Field. The goal was even shared by The Bleacher Report, which has helped the view count for the absolute rocket near the six digit mark.

Levis Lifts It Up

Brett Levis beat out just about half the Atletico Ottawa squad en route to what is, undoubtedly, the best goal of his career so far.

The utility player began a run from his own half that saw him pick up possession between two players, carve space away from another, and then smartly take advantage of a retreating backline to fire an outrageous out-of-the-box screamer to score Valour’s sixth on the night.

Did we mention that was his first match of the season? Play more Brett Levis.

With FC Edmonton moments away from losing is home opener, Tobias Warschewski showed nerves of steel on the final play of the game: attempting an audacious bicycle kick, the six-foot-two German forward pinged the ball into the far corner to earn his side a point with the final touch of the game.

The magical moment for the Eddies is the living embodiment of the club’s never-say-die attitude, and it’ll go down in the history books as one of the finest goals scored at Clarke Stadium. OneSoccer was quick to call it a goal of the season contender, and we’re not going to argue that.

The opening month of action saw 44 goals get tucked away, and we’re keen to see how many more are added to the tally this May. With the fifth round kicking off on Friday, we won’t have long to wait until the goals start pouring in again.

Interested in sponsoring these monthly posts? Drop us a line here.