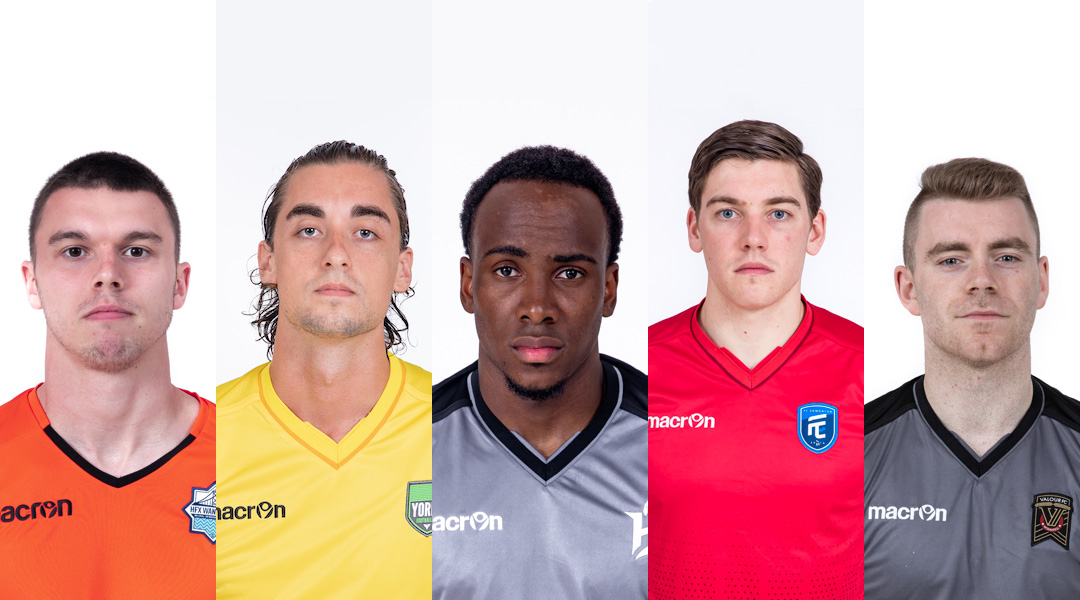 When the Canadian Premier League partnered with Macron to develop individualized home and away kits, fans had good reason to be excited: the sportswear producer had a huge portfolio of great-looking work, and had already partnered with a lot of youth clubs within Canada.

The partnership was a natural fit, and in early April each club revealed its home and away kit. It’s clear that a lot of each club’s identity was put into the designs, with each CPL side coming away with a sense of individuality that isn’t always seen in the likes of Major League Soccer.

With a recent roster update to the website, every CPL club has now shown what its primary goalkeeper kit will look like (with only one team revealing its secondary). These are much more simple than the nine stripes, camouflage, or wave patterns fans will find outfield kits, with a few clubs donning the same goalkeeper kits as others – but still, one can’t help but be excited to see what colour each club went with.

Both Marco Carducci and Nikolas Giantsopouos opted to wear the club’s primary yellow goalkeeper kit, so it’s not known what the alternate choice is. Canadian Premier League fans who tuned into the inaugural match will get a sense of familiarity with this, as it’s the same kit worn by York9 FC’s Nathan Ingham, who set a strong precedent for keepers in yellow with plenty of strong saves.

The Eddies offered a more comprehensive view of both the primary and alternative goalkeeper kit. The bright yellow with an orange neck trim makes an appearance once more, with FC Edmonton opting to use red for its second goalkeeper kit. FC Edmonton fans will be used to seeing a striped shoulder on their keepers, but the Canadian Premier League is keeping things simple for its inaugural shotstopper looks.

Triston Henry clawed the starting spot away from Quillan Roberts to give Forge FC fans a good look at the new kit this Saturday, and it’s a colour scheme that plays well with the Hamilton-based club’s identity. Neither keeper opted to wear the secondary kit, but given that both Valour FC and Pacific FC picked the same primary goalkeeper kit, we suppose there needs to be one.

The Wanderers are the first club to take orange as its primary goalkeeper kit colour, which should provide a nice contrast to the two blues of the teams home and away kits. Given that Forge FC will be donning orange when Halifax travels there – with a keeper in gray – Halifax will likely have yellow goalkeeper’s kit an alternate colour.

The somber tones of gray and black are a popular choice in the Canadian Premier League, with Pacific FC one of three teams to make that the primary kit for its keepers. It’s not known what the Vancouver Isle side will use for a secondary kit.

The Winnipeg-based side is the third to use a sleek grey and black combination, which is the only goalkeeper kit to have a sleeve colour different than the front. It’s not known what Valour FC will use for a secondary kit.

The yellow goalkeeping kit of York9 FC was confirmed when Nathan Ingham was announced as vice-captain earlier this week, which more or less revealed he would start ahead of Matt Silva. Ingham had a stellar performance against Forge FC, setting the bar high for keepers in the league. The club has not revealed any secondary kit colour, regardless of who will win the right to wear it.

If the league grows as commissioner David Clanachan hopes it will, these colours will likely be subject to change as ownership groups partner with Macron to introduce new club identities into the fold – and new club colours with them. With so much work being required to start a professional football league from the ground up, though, it makes sense for the league to keep its goalkeeper kits simple for the time being.