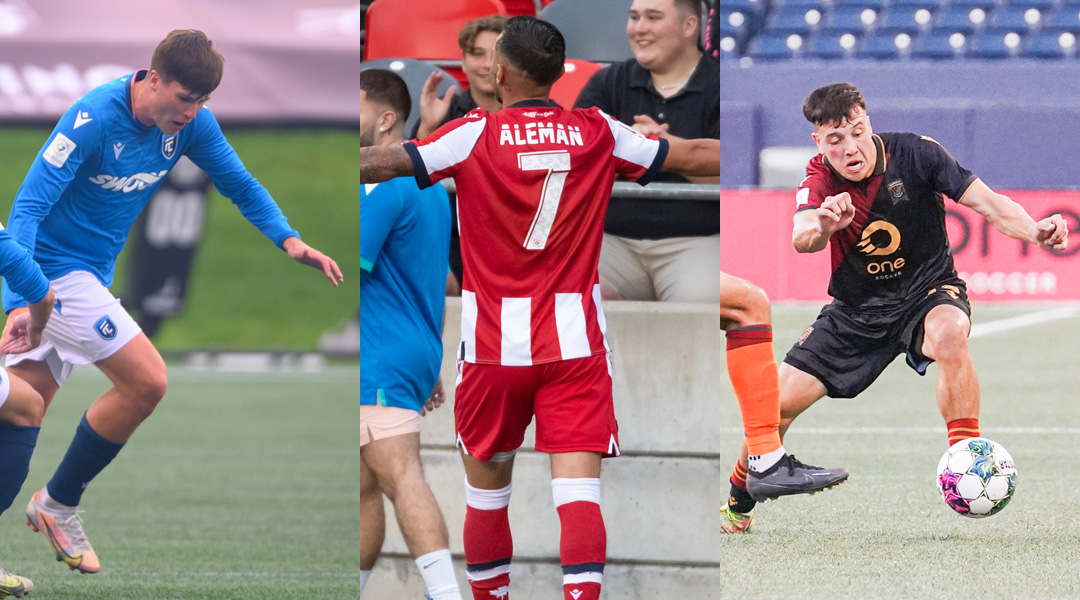 With the fifth month of Canadian Premier League action having wrapped up and a long weekend now upon us, it’s a good time to reflect back on the top goals the league produced in August – and there were a lot of them!

Without further ado, here’s Northern Tribune’s Goals of the Month:

Finding himself with space out on the deep left flank, Atletico Ottawa’s Keven Aleman fired a lofted shot with the outside of his left boot that improbably careened into into the back of the net. It’s the kind of angle where you just don’t expect an on-target effort from, but it gave Ottawa the go-ahead goal against Halifax.

There was some speculation about whether the forward had meant to shoot or cross the ball. In any event, he procured an absolutely stellar goal in an area where he really shouldn’t have been able to.

Most of Aleman’s season has seen him utilized as a late game substitute, but this match seemed to have turned the gaffer’s head: this was the first of three straight starts, with the 28-year-old bagging a goal against Cavalry FC in the next match, too.

The Nine Stripes seem to come alive playing Forge away, and that trend continued this month with a fiery 905 Derby that ended 3-1 in the visitor’s favour. The go-ahead goal scored by N’sa was nothing short of spectacular: cutting in to the edge of the box from the right, he let a defender go to ground, calmly swooped the ball around him, and then unleashed a near-post blast that left Triston Henry begging.

The goal was his first of the campaign, and second in green. It wasn’t even the only banger of the match, with Tristan Borges putting forth a contender, too.

Brian Wright did aplenty right off the ball to make this work: he recognizes the space in between two defenders that was ripe for the picking, timed his run, and chipped the ball perfectly over Marco Carducci in what finished as a big 3-0 away win for his side at Spruce Meadows.

A nice chip goal needs plenty of technique and composure, and Brian Wright – the club’s second-top goalscorer of all time – certainly stepped up big on the occasion to do it.

The real ones will know that this isn’t Toby’s first time to score a banger in Eddies blue.

Perhaps one-upping his last-gasp overhead kick from earlier this year, German forward Tobias Warschewski received the ball on a short corner, took a look up to update his internal radar, and then launched a looping ball that Adam Jenkins could only describe as a ‘Junior Olimpico’. It went in.

Coolly turning and giving the crowd a celebratory wave after, Warschewski demonstrated an absolute fearlessness in an against-the-odds effort that, one would think, he had no business scoring.

The Eddies went on to win the match 3-2, with Tobias earning player of the week honours and ensuring victory for Alan Koch’s 50th match in charge.

When we said that Matteo de Brienne deserved another shot in the league, moments like this are exactly what we had in mind. Finding himself on the end of an stellar cross from Sean Rea, the Valour midfielder still had a lot to do to finish the chance, but was able to contort his body to produce an overhead volley worthy of the big leagues.

While Atletico Ottawa fans had hoped for him to stay close to home through the draft, Phillip Dos Santos shrewdly picked up the youngster on a multi-year deal just one day prior. We’re viewing that as a good move, even if he largely wasn’t in the gaffer’s plans.

The goal also has significant ramifications in Valour FC’s playoff hunt, with the Winnipeg-based side now moving within two points of a Pacific FC side that has seen its momentum slow down following the sale of Alejandro Diaz.

There were plenty of worth contenders on the honorary list, like Borges’ aforementioned effort or Pierre Lamothe’s pure strike. However, it’s the five above that wowed us the most.

September is expected to further shape the playoff eliminations, with the league seemingly in a five-horse race to the postseason. While who ultimately finishes in the top half is still to be determined, each team has shown that they can produce wonderful moments of magic no matter where they are on the table.

Let’s get it going, September!