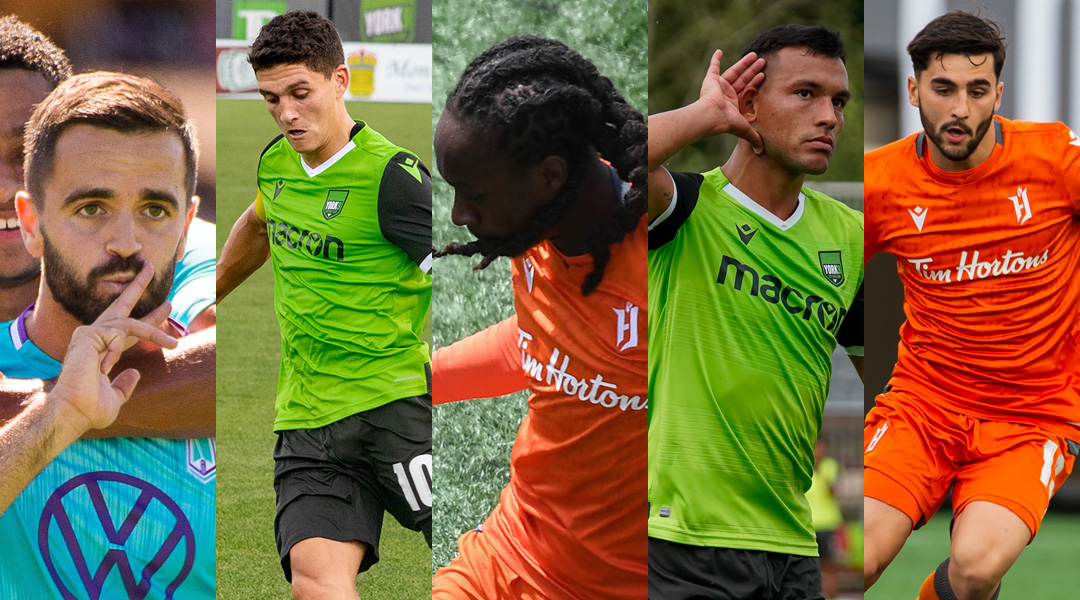 Along with the midsummer heat (and occasional torrential downpours, because this is a Canadian league), July has brought it some of the Canadian Premier League’s best goals to date. The first month of fall season action has seen a lot more parity than the previous season, with the four top sides all within three points of one another – though spring season winner Cavalry FC has a game in hand over the other top three sides.

Northern Tribune’s picks for the best CPL goals of the month for July 2019 have been dominated by the league’s two Ontario-based clubs, with York9 FC and Forge FC grabbing hold of four of the top five picks – a marked difference from last month.

Without further ado, let’s take a look at the best Canadian Premier League goals that July had to offer:

It’s no secret that Victor Blasco and Terran Campbell have been key figures in Pacific FC‘s summertime goalscoring prowess, though the duo have remained humble amid their good form.

In the the latest coast-to-coast clash, the 25-year-old Spaniard fired in a picture-perfect freekick: the powerful blast rose over the wall, curled to the corner, and dipped into the net in one fluid, quick motion. Blasco now has five goals in fourteen league appearances, marking a great return to professional football for the former La Masia student.

20-year-old midfielder Tristan Borges didn’t just score the league’s first Olimpico: the amazing goal that came directly from his corner kick meant that he had also scored against every Canadian Premier League club that has played against Forge FC.

After spending a few years overseas with SC Heerenveen, Borges has been one of the brightest stars of the burgeoning league – and it’s not the the first time he’s made a goal of the month list, either.

Captains are there to lead by example, and Aparicio certainly came up big for his club during York9 FC‘s midsummer match against Pacific FC. Driving the ball into Pacific FC’s side of the pitch, Aparicio let loose an absolute cannon from far out, and it teleported straight into the back corner of the net. It was a moment of pure inspiration, and it paid off.

Aparicio shrugged off the yellow card he received for his shirtless celebration, simply stating that it was the best goal of his career so far. While it didn’t receive any love from Canadian sports networks like TSN, it made the ESPN Top 10 for the night.

The Left-Footed Wonder Strike From Gattas

Chilean striker Rodrigo Gattas said he’s been enjoying his first few months in Canada, but this was probably his favourite day here so far: the 27-year-old striker bagged the league’s first hat trick, and the second goal of the trio was an absolute peach. He struck a wonderful left-footed effort from far outside the box, and it drifted just out of Jan-Michael Williams’ reach to strike the the back of the net.

The fact that Gattas only took a single touch to set himself up is icing on the cake: if the Chilean striker can build on his form from July – in which he also scored against the Montreal Impact – the fall season is going to be a treat for fans of the Nine Stripes.

Perhaps the league’s most-viewed goal so far, Kadell Thomas’s solo effort against Valour FC will go down as the stuff of legend. In the last minute of game, the 22-year-old had just received a yellow card for time wasting at the corner. So, what does he do? He dekes past one of Valour’s new signings, sends the Winnipeg-based club’s captain the wrong way moments later, and then has the audacity to finish it all off with a beautiful chip over Tyson Farago.

It was the solo effort of solo efforts. Kadell’s tricky footwork would lead to the amazing goal being shown on the likes of 433 on Instagram, where it would be viewed by millions of football fans across the globe. Not bad at all from the youngster who scored the club’s first-ever goal.


Honorary mentions go out to Emery Welshman’s nutmeg against Pacific FC, Ryan Telfer’s counter-attack, and Oliver Minatel’s goal against Valour, which are all perfect examples of how off-the-ball movement can lead to great goalscoring opportunities.

If that Canadian Premier League delivers the same caliber of wonder goals in August, it’s going to be a great summer for spectators who take part in the league’s inaugural season. Subscribers to global streaming service OneSoccer can access every match from the league (and more), while CBC Sports is broadcasting a selection of marquee CPL matchups throughout the season for TV viewers.