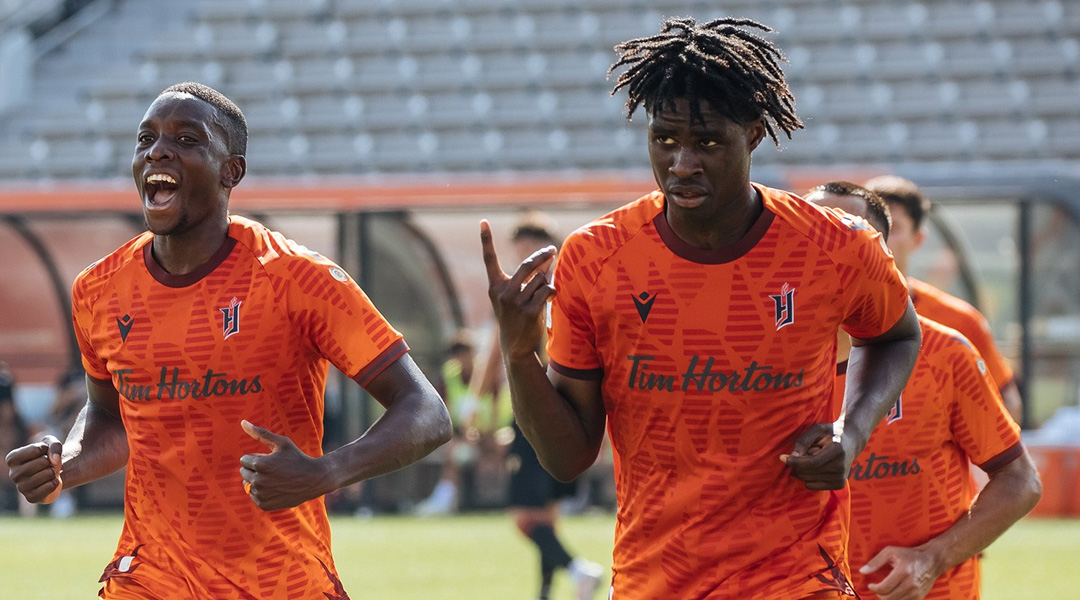 The fourth month of Canadian Premier League action has now concluded, and it continued to bring bangers aplenty into the fold.

We had a tough time narrowing down the list, and somehow ended up with seven instead of the usual five. You know what? We’ll allow it.

Without further ado, here’s Northern Tribune’s Goals of the Month:

Every now and then a goal comes along that makes you think “if this happened in a videogame, it’d look unrealistic”. This is one of those goals.

Woobens’ ability to tee up a short with his back to the goal before completing a 180-degree-turn-and-volley is something that looks like a FIFA animation glitch. Instead, it’s an absolutely worthy contender for goal of the month.

Pacius now has nine goals this season, with his goal of the month contender coming en route to his first professional hat trick. Enjoy this lad while you can, CPL fans, because he’s surely off to higher pastures (Pacius-tures?).

Listen, we’ve already written an article on this goal. It’s that good.

Forge Captain Kyle Bekker rounded out a thorough first-half demolition of FC Edmonton by curling his corner kick beyond Estonia international Andreas Vaikla. It’s been a great month for the lead hammer, who entered July as the first CPL athlete to crack 100 club appearances.

Amazingly, Bekker nearly scored another Olimpico against Cavalry FC later on in the month, though arguably it may have been a less intentional attempt.

The duck is off the back for Marco Bustos, and what a way to do it: the fast-footed forward unleashed a fast-footed, absolutely lethal ranged reaction shot from his left boot that floats perfectly into the back, and into Roloff’s nightmares.

He couldn’t have tried to take a touch, but he didn’t. That’s elite composure, and Cavalry should’ve known: with Bustos going blonde, he’s clearly Super Saiyan.

You ever just look at a player stepping up to take a freekick and feel they’re going to score? Well, in-form team of the week king Ollie Bassett had a moment exactly like that against Forge – a team he’s clearly developing a taste for scoring against.

Everyone watching from Tim Hortons Field knew that the key Atletico Ottawa midfielder was teeing up a shot, but it was so well struck that there was little to do but watch as Triston Henry dived desperately towards the near-post, to no avail.

The English midfielder scored three goals in five games this month. Those are MVP numbers!

This piece of buildup is a thing of absolute beauty: York United’s bulldog in midfield, Isaiah Johnston, sidesteps a defender in midfield, routes himself beyond another, and beautifully sidesteps a third before slotting the ball out wide to De Rosario.

The striker still had a lot to do under pressure, but coolly fired home a go-ahead goal against the reigning champions to cap off what was, by all accounts, a phenomenal build-up from the home team.

Out In The Ballou

When Ballou Tabla is on, he’s on: the former Barcelona prospect has procured two goals in five outings this month, one of which was a stellar in the box run-and-gun against Cavalry FC.

Note where Tabla starts the move from: out on the right, he suddenly darts left, takes the ball, and plays a quick one-two with Shaw before blasting it with enough force to beat Marco Carducci on the near side.

Unless Carducci grows about two feet taller, he’s not stopping that. Take a bow, Ballou!

Forge’s Terran Campbell snuck in on the action during the final day of the month, barreling down the right flank before coyly making his way through a defender and confidently blasting home an absolute cannon at an acute angle.

The former Pacific FC forward has scored in bunches this season, with his six goal contributions coming from three braces. Expect his tally to go up!

We somehow ended up with seven goals this month, and we’ll be darned if we can trim those even further. With other bangers like Jose Escalante’s freekick or Sean Young’s volley finish waiting in the wings, we’re spoiled for choice here. Worse things have happened.

With June having been a stellar month for goals as well, the CPL has been spoiling fans in terms of summertime golazos. We’re keen to see if August can follow suit!