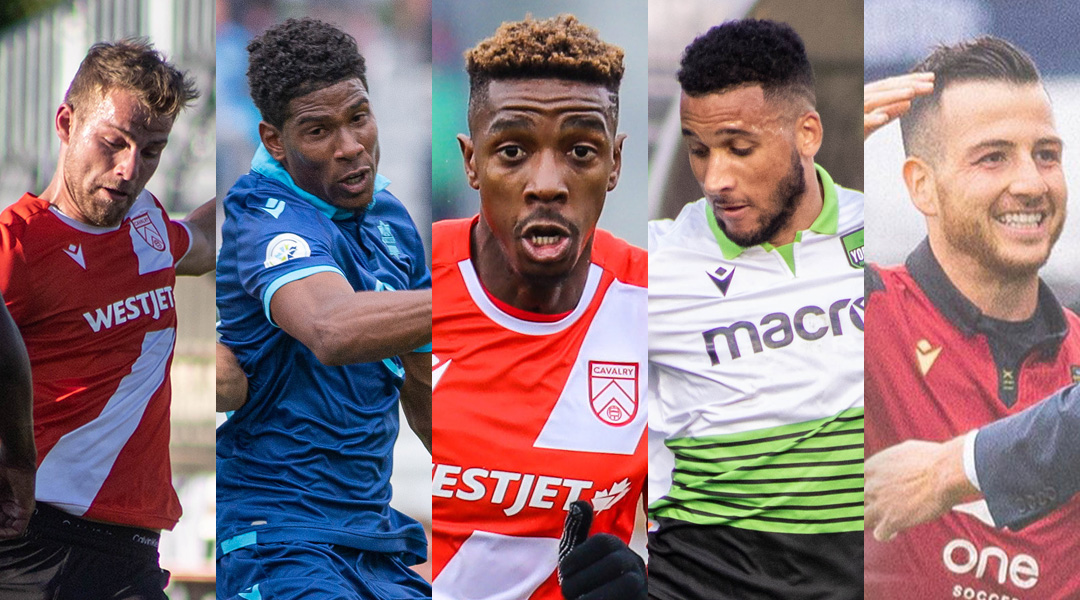 With Tristan Borges taking the cake for May’s Canadian Premier League Goal of the Month, we wanted to take a look at who should be in the running for the next calendar month. June was full of plenty of absolute rockets, several successful set pieces, and a mountain of drama. While OneSoccer has yet to announce its own goal of the month winner, here’s a shortlist compiled by the Northern Tribune.

We’re throwing Canada Day in with the rest of the month, since it’s more attached to the spring season than anything else.

When it comes to set pieces, nobody is more fun to watch than Cavalry FC. The Calgary-based side won the spring season through a combination of set piece plays and sheer brute force, and on the title-clinching night it was former MLS midfielder Julian Buscher combining with Jose Escalante and Elijah Adekugbe for a tricky three-person freekick that fooled Büscher’s old teammate between the sticks.

Rampersad Pulls One Back For The Wanderers

With Halifax trailing two goals at home, Andre Rampersad knew that clinical finishing was needed to help pull the Wanderers back into the game. With a speculative cross coming in from Kodai Iida, Rampersad found himself moving away from the net to collect the ball. Despite this, the midfielder managed to sneak a volleyed effort goalwards, pulling his side back within a goal of the eventual spring season winners.

When Marco Bustos scored for Valour FC some 30 seconds into his team’s away match in Hamilton, it didn’t take long for fans to realize they had just witnessed the fastest goal in league history. His side didn’t start from kickoff with possession, but quickly won the ball and played it forward to Bustos. He cut inside and fired a quick shot from the edge of the box, with his very first touches beating the keeper and contributing to a big moment in league history.

With York9 FC having conceded the second-fastest goal in league history, the Nine Stripes needed to find a way back into the game. Kyle Porter forced the ball out wide to 25-year-old fullback Morey Doner, with the Collingwood-born player striking a beautiful half-volley that flew like an arrow into the back of the net. Doner’s first professional goal came fairly out of nowhere, and it’s exactly what York9 FC needed to power back into the game: they ended the season on a winning note.

Cavalry FC needed at least a point to secure the spring season during the club’s away trip to York9 FC, but Malonga would ultimately earn the side all three points after firing an absolute rocket outside of the box in the 24th minute. It took the Congolese international just one touch to set himself up for the game-winning goal, which was his third of the season. By the way things are going, it’s not likely to be the last.

OneSoccer has yet to announce its own shortlist, so the eventual goal of the month may not even be on the Northern Tribune shortlist. Still, we found it hard to overlook these five – they’re all fantastic in their own way, and narrowing the goals down to a top five wasn’t easy.

With the fall season due to kick off next weekend, Canadian Premier League fans won’t have long to wait until they can watch more goals come in. The fall season transfer window will also run from July 9 to August 7, so there’s always the possibility that some new faces might find their way into the July Goal of the Month competition, too.