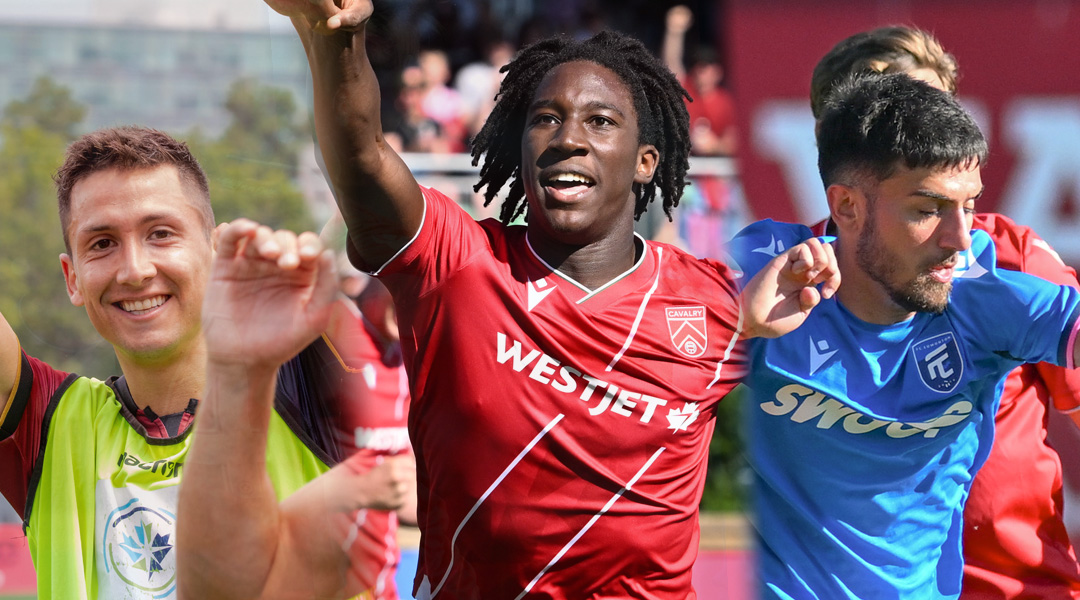 The third month of Canadian Premier League action has witnessed a lot of changes to the league table, with Cavalry and Forge supplying a hefty amount of goals as they rise through the rankings. As the summer season rises upon us, there’s certainly been some fiery goals to match the heat.

Many players dream about scoring against their old club. Fewer do, and even less so manage it in a manner that earns goal of the month plaudits.

Enter FC Edmonton’s Gabriel Bitar, who laced an absolute rocket into the far corner after performing what may be one of the smoothest turns we’ve ever seen. The 23-year-old’s goal was a long time coming, as he’s come inches away from adding a few more to his tally during Edmonton’s survival mode season.

Bitar has been a shining example of ‘FC Opportunity’, showcasing himself to be a player who absolutely deserves to be playing at the Canadian Premier League level. He’s been a steady performer under Alan Koch, echoing last summer’s hot start in Lebanon with head-turning drive and consistency while over in Edmonton.

With just a few hours to go before June came to close, Escalante edged his way into the list with a fearless freekick that cut through the air and beat Irving at the near-post, equalizing for last season’s table-toppers in a dramatic, fiery 3-3 affair that involved two red cards.

The Honduran midfielder was in a likely spot to make the attempt, but he picked his moment just as well as he picked Irving’s pocket: down 2-1 at the start of the second half, this was a pivotal moment that helped his side get back into the fight.

Chilean forward Walter Ponce got off the mark for Valour FC in some style, completing an acrobatic finish in a match that ended as a six-goal thriller.

While visa issues delayed Ponce’s arrival, he’s acclimated well to CPL circles and has looked lively under Phillip Dos Santos. He involved himself in the play by winning a header, and was alert enough to get his boot to the ball when it came flying back in. Despite the fact that he wasn’t even facing the net, a flexible finish saw the forward earn his first goal in Valour stripes.

It’s not a shock to see that one of Aribim Pepple’s five(!) goals from June has cracked the list, with the 19-year-old’s fast-footed volley against Halifax proving the standout among a staggering month of form.

The striker’s strong off the ball movement saw him drift free of any defenders, but there was still a lot left to do: the ball came in at an awkwardly high height to volley, but the in-form forward made it looks easy. Et voila: the go-ahead goal.

With Pepple already testing himself abroad last season, we’ll be shocked if the young talent doesn’t launch himself to another opportunity at the end of this season – but for now, Cavalry FC will certainly enjoy his company.

If you bag a goal from outside of the box while leaving the reigning golden glove winner rooted to the spot, you’re doing something right.

Sergio Camargo’s first goal of the season – and he’s scored in all of them – saw the staple Cavalry press gain possession in midfield, with the quick turnover allowing Camargo ample space as he drove forward and loosed a phenomenally placed right-footed effort into the corner.

There were plenty of good goals to pick from, like Samuel Salter’s all-business shot and Wesley Timoteo’s lightning finish – but for our marbles, the shots we listed were a cut above.

The third month of the season saw 44 goals scored, which is up from 39 last month and matches perfectly with the opening month of the 2022 CPL season. With well over a hundred goals scored so far, it’s not looking like things will be slowing down as the summer season hits a crescendo.