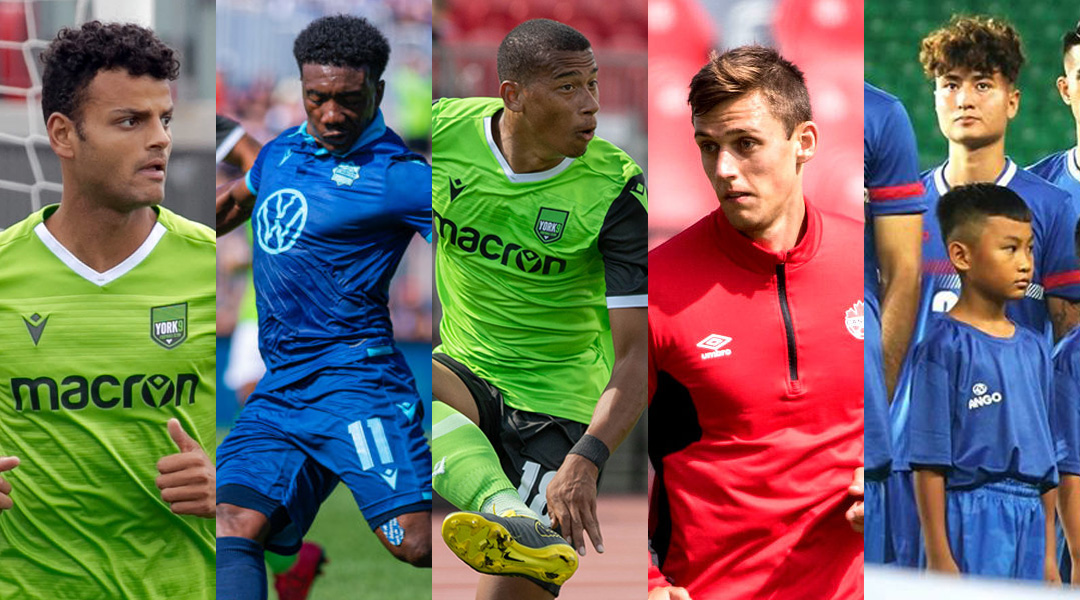 The Canadian Premier League had five players called up for international duties over the last week or so, with three hailing from York9 FC, one from the Halifax Wanderers, and one from FC Edmonton.

Ever since he was playing for the University of Guelph, 26-year-old York9 FC defender Justin Springer has been a member of the Saint Kitts and Nevis national team. After turning down a call-up earlier this year to break back into the Nine Stripes starting squad, the Burlington-born defender accepted the most recent call-up and participated in two CONCACAF Nations League bouts against Belize last week.

The first match came in the form of a 4-0 away win over Belize, with Springer coming on in the 86th minute to help his keep the defensive line energized and hold on to a clean sheet. The second game would see Springer play the full ninety minutes at home against Belize, though an Elroy Smith spot kick would give Belize a narrow 1-0 win over Springer’s national team.

After an impressive season abroad with the Halifax Wanderers, Garcia earned his first call-up with the Trinidad and Tobago national team since he made his international debut 2015. Trinidad and Tobago head coach Dennis Lawrence placed Garcia on the bench, though the 23-year-old forward would get a chance to shine against Honduras on October 14.


When the Soca Warriors found themselves trailing to Honduras in the second half, Lawrence brought on Akeem Garcia in the 62nd minute to help provide a new offensive outlet up front. Unfortunately, neither Garcia nor fellow CPL player Ryan Telfer could change the scoreline, with Trinidad and Tobago falling 1-0 to Honduras.

With two draws and a loss, Trinidad and Tobago now finds itself last place in a group with Honduras and Martinique.

The Nine Stripes star forward only recently opted to accept a call-up from Trinidad and Tobago, where he spent his formative years before a return to Toronto saw him eventually earn Major League Soccer minutes with Toronto FC.

Having scored for The Soca Warriors in his last outing, it’s no surprise that the 25-year-old Telfer started against Honduras, though he wasn’t able to help his national team secure a result against Los Catrachos, falling 1-0 at full time to see Trinidad and Tobago bottom of its CONCACAF Nations League group.

While Trinidad and Tobago played a friendly against Venezuela a few days afterwards, Telfer missed the match to help York9 FC secure a 4-0 win against a heavily rotated Forge FC side in league action.

While Emilio Estevez had been called up to the Chinese Taipei national team and not made the final squad before, the tricky York9 FC midfielder made the cut this time around as the national side prepared for a tough World Cup qualification bout against Australia.


Estevez must have impressed during training camp, because he started against Australia in what ended up being a lopsided victory for the Socceroos: while the score was 2-1 in the 19th minute, Australia would see itself to a comfortable 7-1 victory over Chinese Taipei, which now finds itself in dead last in its five-team World Cup qualification group with three straight losses.

Estevez featured for 68 minutes during his debut match against the Socceroos before being substituted out. It’s a bit of a role reversal for him compared to his club life, with Nine Stripes gaffer Jim Brennan often deploying the quick-footed youngster as an impact substitute late in the game.

The six-foot-four FC Edmonton defender has been one of the best defenders in the Canadian Premier League, becoming the second-ever CPL athlete to earn a call up from John Herdman after Marco Carducci rode the bench against Cuba last month.

With Canada facing a tough bout against USA, Didic was placed on the bench with Herdman opting to rely on Steven Vitoria and Derek Cornelius for his central defensive line. While he may not have been able to make his debut for the senior team, Didic got to be part of the squad that saw Canada trump the USA for the first time in 34 years.


With Canadian Premier League players making continuing to make waves and prove their worth as professional athletes, it’ll be interesting to see how many call-ups the newfound league continues to help its players earn. With five athletes already being called up in October alone, things are looking good.

Given that four of the five players took part in CONCACAF Nations League action, fans who want to keep closer tabs on how these Canadian Premier League players performed can simply tune in to OneSoccer to watch the match replays, with only Emilio’s World Cup qualification bout being unavailable on the global streaming service.