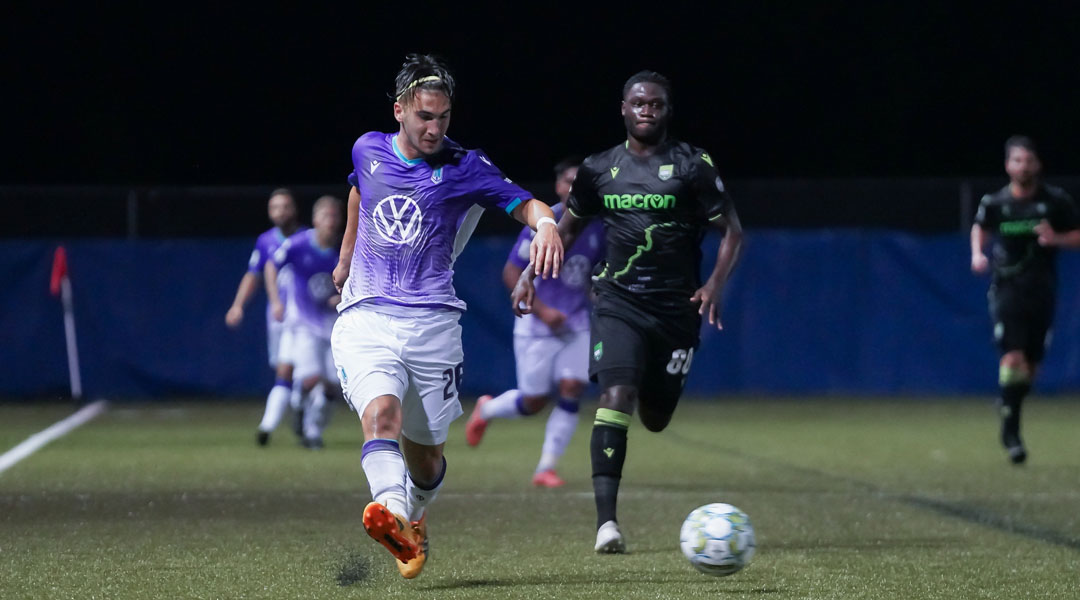 York9 FC and Pacific FC played out to a one-one draw for their second match of the Island Games tournament, with Pacific FC rescuing a point with a late-game attacking push.

With both sides having yet to play Forge FC and Cavalry FC, one imagines that neither side will be particularly happy with being on two points after two games played – but as things stand, York9 FC will moreso feel like this match was two points lost.

The Nine Stripes saw team captain Manny Aparicio enter the starting lineup after having missed the opener due to a heel injury, while teenage goalscorer Lowell Wright saw his good debut performance rewarded with his first start. Pacific FC would start Marcel de Jong for the first time ever, with Marco Bustos, Victor Blasco, and Terran Campbell leading the side’s attacking line.

Pacific FC had a great opportunity to score after that when an acrobatic close range effort from Thomas Meilleur-Giguere likely would have resulted in a goal if it went anywhere but straight at Nathan Ingham.

The best chance of the first half came to the tridents with a great cross from veteran left-back Marcel de Jong, who curled in a fast ball that Alessandro Hojabrpour redirected just off-target. York9 FC almost repeated a rough second half start two games in a row when Marco Bustos broke through into the box, but this time Ingham was able to block the shot and keep things level.

Blasco missed a golden opportunity in the 58th minute when Roger Thompson failed to clear a cross, with the Barcelona-born attacker skying his shot, too.


The Nine Stripes added some more attacking threats of its own by giving a debut to highly-rated midfielder Michael Petrasso, who scored six goals for Valour FC last year, with Alvaro Rivero coming on for Lowell Wright.

For the second game in a row, Jim Brennan would see one of his substitutions pay off when Real Madrid Academy product Alvaro Rivero was slipped an aerial through ball by Ryan Telfer, with the striker burying his shot beyond goalkeeper Nolan Wirth to give the Nine Stripes the lead.

Things got heated near the end of the match, with both sides entering a small scrum when Pacific FC was due to take a freekick from just outside of the box. Both Marco Bustos and Joseph Di Chiara would get a yellow apiece from the altercation, with Di Chiara joining Dominic Samuel and Elijah Adekugbe as joint yellow card leaders of the tournament with two yellow cards after two games played.

A late game attacking push from Pacific FC would pay off for the west coast side, with defender Lukas MacNaughton jumping up in front of Nathan Ingham with the ball then going off of the goalkeeper and into the net:

At the moment, there’s conflicting reports as to whether that’ll go down as a MacNaughton goal, or an Ingham own goal.

Things got even more hectic as Pacific FC goalkeeper coach Mark Village appeared to be ejected from the bench, while Luca Gasparotto nearly scored an own goal of his own on Nathan Ingham, forcing a fine stop from the Nine Stripes goalkeeper. The resulting corner would see a header from MacNaughton go just wide of the net.

With both sides yet to play Forge FC and Cavalry FC, the pressure will be up for both York9 FC and Pacific FC to secure their first respective wins as the middle stage of the short season approaches.

The Nine Stripes till take on Valour FC this Saturday, with Pacific FC squaring off against Forge FC three hours after that. Both matches will be available on OneSoccer and CBC Sports.