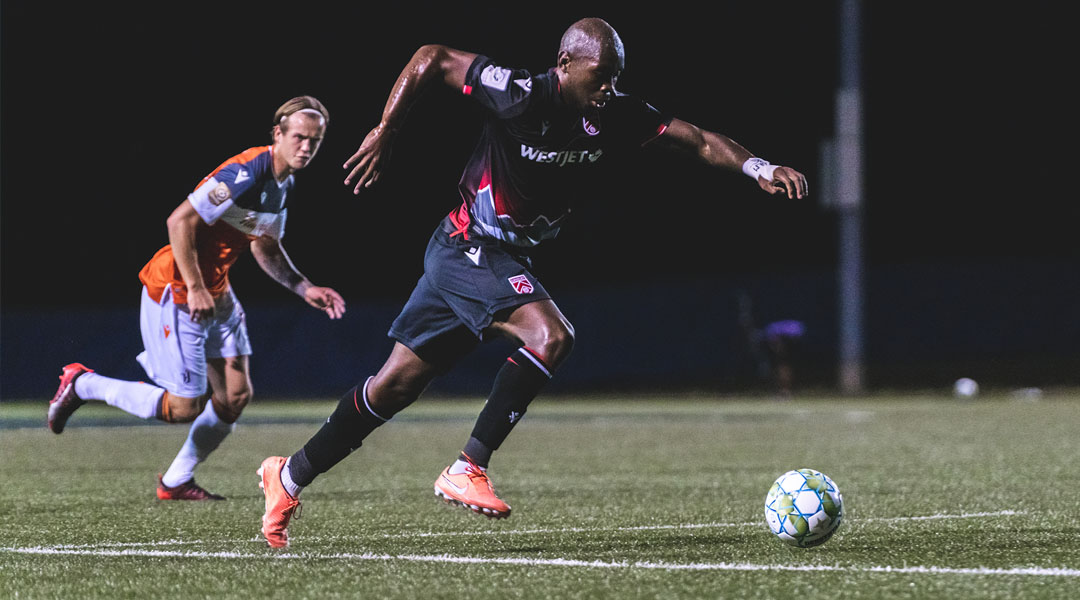 Electric City FC striker Jordan Brown is set for a Canadian Premier League return, according to a source from the League1 Ontario side.

We’ve heard that the 25-year-old has attracted recent interest from a CPL club, leaving a few possibilities as to his next destination. Still under contract with Peterborough’s League1 Ontario expansion team, however, the transfer of the former Cavalry striker will likely come with conditions.

Brown scored Cavalry’s first-ever goal in league play, with his two seasons in red seeing the English striker tally eight goals in 42 appearances. The former English youth international also scored the go-ahead goal in the first ever CPL-vs-MLS upset, with his time in CPL circles seeing him prove to be a lethal finisher.

Brown spent last season with German side VfR Aalen and Icelandic outfit Fylkir before undergoing a return to Canadian soil through Electric City FC this year, where the English talent has bagged eleven goals and five assists in just seventeen appearances, fifteen of which were starts.

Brown had also previously played for Chelmsford City, Hannover 96, Barnet, and Czech side Znojmo, having developed through both the Arsenal and West Ham academy systems.

While the move is still in the final stages, the destination remains unconfirmed: it’s no secret that Cavalry FC is searching for a striker to replace Aribim Pepple, with the Spruce Meadows outlet having been sniffing around for Mo Babouli before he inked a deal with York United instead.

However, Cavalry – much like York United, Atletico Ottawa, Halifax Wanderers, and Valour – are full-up on internationals, which limits Brown’s potential move to Forge, Pacific, or FC Edmonton. The hammers seem set up top with the recruitment of Jordan Hamilton, while FC Edmonton’s fiscal situation likely precludes them from adding any midseason roster-moves – unless Brown arrives on loan, of course.

Pacific FC is certainly missing an established finisher after the sale of Alejandro Diaz, and the club will want options up top as they seek out a title defense season and a tough away leg to CS Herediano in continental play. That being said, outbound Pacific FC CEO Rob Friend recently implied to us that a Diaz replacement would likely take some time.

“We want to get it right,” said the Langley-bound executive. “We have to have some patience with it, that’s a key role. We have some fantastic offensive players in Josh Heard, Gianni Dos Santos, and young Djenairo Daniels.”

Should Brown complete his CPL return, he wouldn’t be the only ECFC athlete to secure a move to Canada’s top domestic flight this year: Eleias Himaras recently signed with York United and made his professional debut just last week.

Electric City FC’s first season in League1 Ontario saw the club smash a league attendance record right out of the gate, though the men’s team has had a tough time since: following the early sacking of Jamie Sherwood and the hushed firing of Rob Jenkins, the club has lagged behind in the race for playoffs.

For now, it appears that the likely sale of Jordan Brown will be a landmark moment for Electric City FC, and it’ll certainly be interesting to see how the former Cavalry striker performs back in CPL circles.