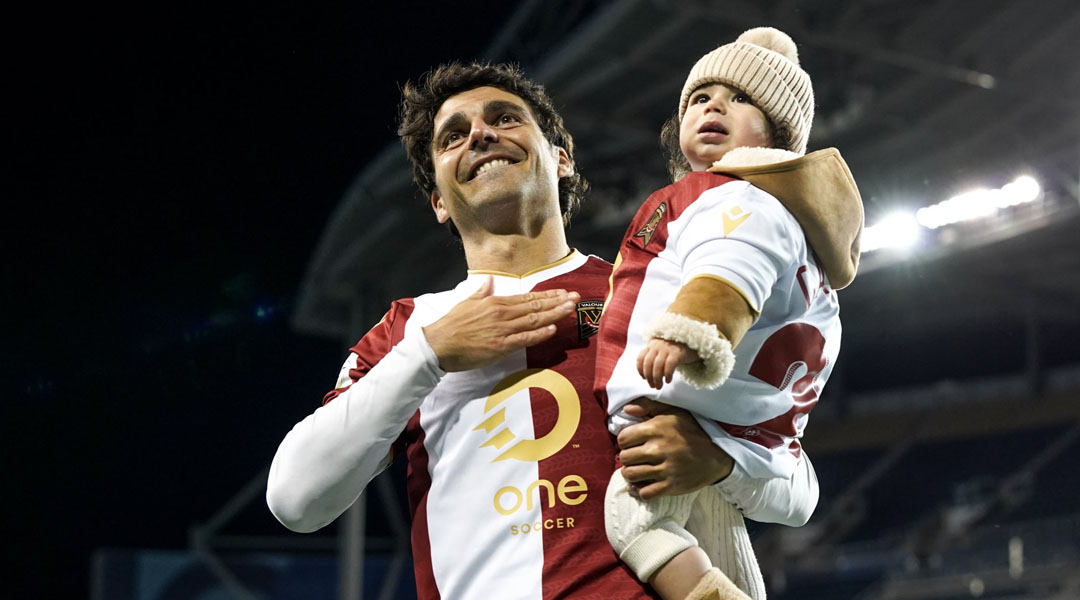 When Jose Galan first arrived in Winnipeg some three years ago, the journeyman midfielder hoped he had finally found the right place to settle down after playing throughout some fifteen countries. The Leon-born athlete soon found himself well-acclimated to Winnipeg, enjoying the city, its people, and life with Valour FC.

With his contract having expired at the end of November, Galan hopes to continue to be a part of project. That isn’t saying the CPL has always made it easy for him, though. More on that later.

Galan has often spoke highly of the CPL, but was recently caught off-guard when some criticisms went public in a much harsher light than he had originally intended. Speaking with Northern Tribune, Galan put it bluntly: “Being in the spotlight because of that wasn’t fun,” he says, “I’ve been playing for eighteen years, and I’m not a controversial guy. That’s not my style.”

The midfielder wants to make it clear that he isn’t here to fight the league – though he has some issues with it – but instead wants to help it grow.

“I’m really fighting hard to be here. My wife is here, and she works in a Canadian company. My children are here. I might be from Spain, but I love to be here.”

Jose’s time in Winnipeg has seen the midfielder make thirty appearances for the club across all competitions. He scored his first goal for the side in a 4-0 routing over Atletico Ottawa at the Island Games last year, with Galan dedicating the goal to his Winnipeg-born baby daughter Celia. With another daughter now expected to arrive in January, he’s hoping he can make another goal celebration for her, too.

The 35-year-old midfielder saw a foot injury curtail the start to his third season with Valour FC this year, and was told that at his age he was unlikely to recover in time to play. Galan proved the doubters wrong, going on to feature in twelve of the club’s thirteen final matches of the campaign.

2021, as it turns out, was hardly the first time his age has proved a point of contention in the CPL.

When Galan finished his first season in 2019, he was initially told that he couldn’t be re-signed because of his age. Rumours indicate that the league had moved to implement a maximum age cap for foreign athletes at the time, though this was abandoned prior to The Island Games.

Galan appeared in five of the club’s seven matches that year, donning the captain’s armband for a 2-1 win over FC Edmonton. Once the bubbled season was over, Galan spent the offseason with CP Villarrobledo before, once again, running into issues with the league when he went to re-sign with Valour ahead of the 2021 season. The paperwork eventually went through, but his lawyer was involved.

Galan, 35, has had to fight tooth and nail for a spot in the CPL due to his age.

“I was angry with the league,” he admits, “because I want to play here. I could go anywhere, yes, because it is made hard for me to play here. I have to fight a lot every single season, nobody sees. It shouldn’t be about my age. What are the roster rules? Everybody knows the rules in word, but what about in writing? I asked for them in writing.”

It leaves Galan worried that, should Valour wish to retain him for a fourth season, he’ll be up against it with the league office yet again, just as he has been in the prior seasons.

“I paid out of my own pocket to get my permanent residency papers done express, and I asked the league to have it in writing that I will count as a domestic with my PR,” he explains. “What if I invested all this money, all this time, all this effort, and they do not allow me because they don’t want foreigners over thirty? I’ve done everything I can do.”

Because of issues like that, Galan – even in his precarious position – wants to speak out, and not just about the age issue. Having been here from the first season onwards, he’s talked to enough teammates and has seen enough with his own eyes to form a strong opinion on what change needs to come.

“I feel responsible in some part,” he says, “I understand that at twenty years old, people won’t speak. They’re young Canadians who don’t want to kill their careers. I can have a voice, so I feel responsible.”

Players have spoken out anonymously in the past about conditions within the league that has left them striving for a union, with PFA Canada confirming that the CPL was, after ample sustained pressure, acquiescing to formal discussions regarding a potential collective bargaining agreement. Galan, who has had his fair share of struggles here, say it’s a step in the right direction.

Having talked with many CPL players about their salaries, Galan was saddened to hear what many made given their skill levels. He insists that while many have enough quality to play in Europe, several are considering leaving the game behind due to financial concerns.

“I don’t want to fight the league. I want to develop it, but it’s true that there are things I think are unacceptable: the salary, speaking loudly, is not good enough.”

Galan makes mention of Dylan Carreiro and Luca Gasparotto as examples, though there are several others from the league who have hung up their boots early. Professional footballers, in his eyes, should always making a living wage, though there are many in the CPL who don’t.

Despite the criticisms, he wants to champion the league for the good that it does, too. The Spanish midfielder enjoys the level of play, which especially surprised him given the age of the league itself. He also enjoys the the growing supporter’s culture that has done fairly well to maintain itself throughout two years of a global pandemic. “Not only with Valour,” he offers, “but Halifax, Calgary, the supporters, I love them – though I think Valour are the best.”

I think the level of football is very high, more than I expected for a league of three years. The level of the coaches and the philosophy of the teams, how they play, my parents tell me they enjoy watching it! It’s a joy. The coverage of it is amazing, and the supporters, and how the league creates a real feeling between them.

Like all things in life, there are pros and cons. Such are Jose’s views on the CPL. “There are so many good things, but at the same time there are unacceptable things,” admits Galan, “many people and players are frustrated by this, and many players that I know want to leave just because of the economics.”

While what happens next with his future remains unclear, Jose has returned to Winnipeg following a family trip and is running youth coaching clinics in the city.

“I really want to play for Valour,” he emphasizes. “I understand that this is a league made for the development of Canadians. I love that. But everyone in football knows, you need players like me, Ramon Soria, or so many others who have experience in other countries and know what football is about. We can teach that, and it has value.”

For Jose, it’s not about the money – he has made enough throughout his career to be comfortable. In any event, he says, he’s certainly not thinking about making any significant amount in Canada. He plays for the passion of the game, he says, and he wants to be part of something bigger. He wants to help Winnipeg grow into a soccer city.

I’ve done everything I can do, I love this environment and the way Valour plays, I love my teammates, and I want to play so badly in this league. But I’m fighting so hard for it. I respect every rule, but I wish the league was more clear on them. I’m doing everything in my hands and paying from my own pocket to get my PR, getting all those papers, because I want to keep playing, and the league could say no, because there are no rules in writing. I wish things were more clear.

Valour Roster To Be Determined

Right now, Valour FC has re-signed two defensive players for the 2022 season: Andrew Jean-Baptiste and Stefan Cebara, who are 29 and 30 respectively. Dos Santos says that roster stability will be a core component in the squad he puts together for next season, which bodes well for Galan’s chances of returning.

Speaking briefly with some past and present members of the Valour squad, Galan was described as a leader in the locker room and, when it comes to training, a shining example of both fitness and professionalism. He hopes that he’ll get the opportunity to show more domestic youngsters what it means to be a professional.

He closes with a simple statement:

“The quality of players you have in this country is amazing. I totally agree that the league is meant for Canadians, I know that. You have to make those kids better with experienced players that know the game form all of the world. Let the club decide who do they want to sign or not, and judge me for what I can do on the field.”