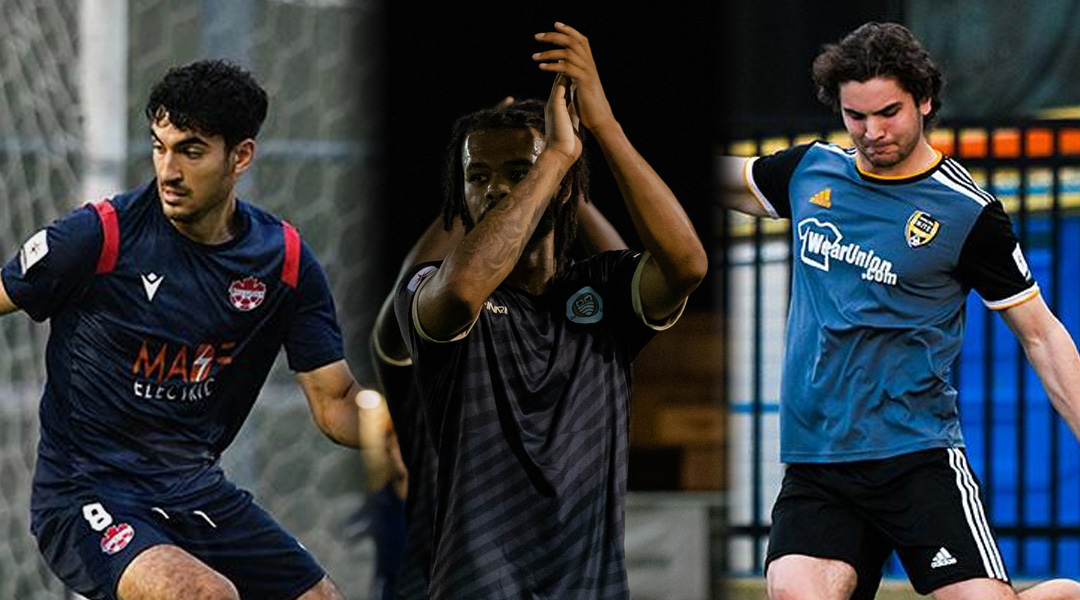 It’s no secret that League1 Ontario is a veritable pipeline of domestic talent, with the provincial pro-am league helping produce CPL talent aplenty and, of course, eight World Cup athletes too.

The 2022 League1 Ontario season continued to raise the bar as the provincial league prepares for promotion and relegation, and that left us thinking about where some of the best and brightest might wind up in the not-so-far future.

Without further ado, here are five League1 Ontario athletes we could make the jump to the Canadian Premier League next year:

Former Loudoun United forward Massimo Ferrin has no shortage of accolades from his title-winning invincible season with the Vaughan Azzurri: after scoring an absolutely astounding 23 goals in just 15 games (that’s good for 1.53 goals per game), he rightly collected the League1 Ontario MVP Award in addition to the golden boot, too.

He’s honed his craft at with the University of Alabama at Birmingham and soccer powerhouse Syracuse University, and the prolific Azzurri forward – who already has a year of USL Championship appearance under his belt – is clearly operating at a level too high for the provincial semi-pro league.

It’s clear that Ferrin is ready to take his next steps, but if a move to the CPL doesn’t come to fruition he’ll still have another opportunity to prove the doubters wrong when Vaughan sets forth in the Canadian Championship next year.

League1 Ontario forward of the year Miles Green had himself a season, exploding onto the scene with an astounding return of 23 goals in just 20 matches, which is nearly half of his team’s entire goal tally. We’ve heard that the left-footed striker has turned a few heads in the CPL, and after his prolific campaign we’d be shocked if he didn’t have any trial opportunities lined up next year.

Green had no less than three hat tricks last season, including a five-goal solo demolition act over the St. Catharines Roma Wolves. He’s good a good sense of positioning and a natural eye for goal, and that’s a deadly combination if he can refine his technical and tactical palette at the pro level.

Manchester-born forward Ethan Beckford has been an absolute dynamo for the Rovers this year, contributing fifteen goals in seventeen appearances through the regular season. He was good for two more goals during Simcoe County’s playoff run, and it’s clear to see that Beckford is a level above League1 Ontario.

What remains to be seen is if the former Toronto FC II man can return to professional heights – and as a runner-up for League1 Ontario’s MVP award this year, he’s clearly in a good spot to step up. The son of former Manchester City defender Jason Beckford has clearly got it in him, but who’s watching?

Former Iraq U-19 striker Ameer Kinani was one of the most deadly finishers in League1 Ontario this year, recording 17 goals in just 20 regular season matches for the ProStars. He also netted seven goals in eight appearances for the George Brown Huskies, which is exactly what you’d expect from someone who also developed with Spanish side Cartagena FC.

While it’s clear that Kinani is a standout at the League1 Ontario level, he has something that a lot of players his age don’t: youth national team and professional club experience, both from overseas. That’d certainly help him acclimate to CPL heights if given the chance.

Another Vaughan Azzurri player worth looking into is Gianluca Catalano, a former Canada U-17 goalkeeper who also spent part of this year as a backup option for York United. Now 22, the former Toronto FC II prospect has continued to grow in a pathway that has produced many greats before him.

Catalano made ten appearances for Vaughan this season, conceding eleven goals. He came up big for the side in playoffs and was between the sticks for the club’s huge 5-1 championship win, showing that he can perform in the big occasions.

He also made one professional appearance for the Nine Stripes this year before they opted to ink Electric City’s Eleias Himaras instead, but there’s a hunger to Catalano’s game that suggests he’s worth a look at for any CPL club needing some competition in the spot.

On a similar note, how is Quillan Roberts still outside of the pro game? The former Toronto FC, LAFC, and Forge shot-stopper has consistently wowed League1 Ontario spectators with spectacular saves and is clearly ready for a return to a higher level, too.

We’ve no doubt there are plenty of League1 Ontario athletes who have what it takes to jump up to the Canadian Premier League level. There’ve already been many who have, and the same can even be said for the Canadian national team. While who makes the next steps remains to be seen, we’ve got a good feeling about the ones on this list if they’re given a chance.