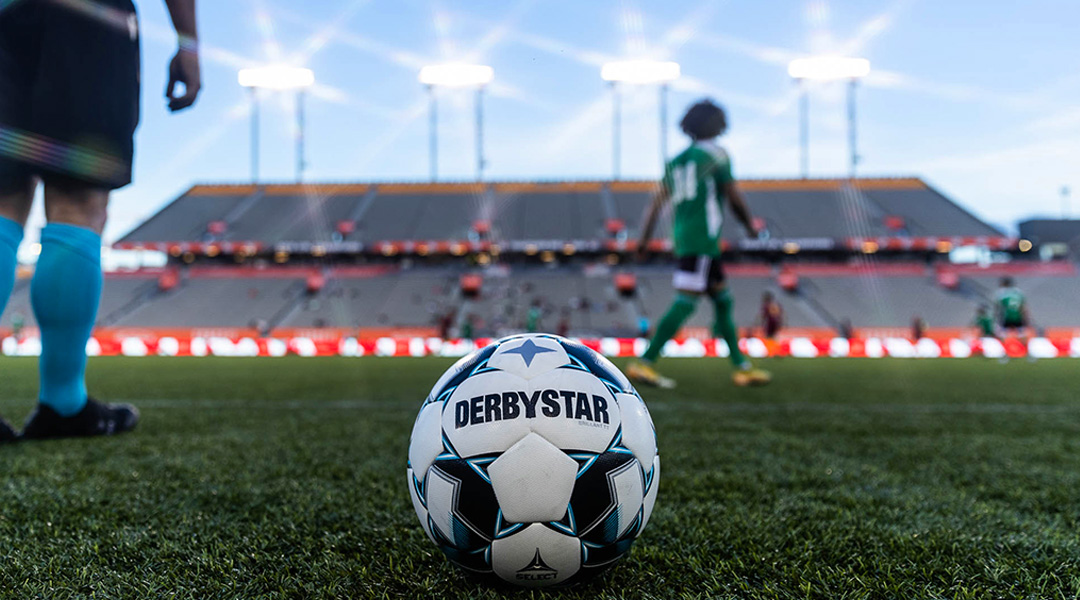 For just the second time, this past weekend saw a Canadian Premier League match followed up by a League1 Ontario game in the same venue, allowing CPL spectators to experience a highly competitive pro-am league that has helped develop several current national team players.

League1 Canada President Dino Rossi is keen to continue a formula that has, thus far, provided both a nice spotlight on the semi-professional league and given its athletes a taste of professional stadium environments, too.

“We’re very excited about the prospect of doing a lot more double-headers here in Ontario with Forge and York United. This is a great way for us to bring the two leagues even closer together, and for our players to have the ability to have the touch and feel of being in a CPL stadium. This is what they’re aspiring to do: it’s a level they’re aspiring to play in front of a great crowd, so it’s good to bring them close to that.”

Vaughan Azzurri head coach Patrice Gheisar echoed the sentiment, stating that he hopes that League1 Ontario athletes get further opportunity to play at elite, professional facilities that are a step above what they would usually experience in regular season action.

“We also hope these events will bring more eyes to these games from CPL coaches as most of our players seek to find a home in that wonderful league. It also shows them there is a real pathway between CPL and L1O and that our league wants to promote its players,” he added.

The matches came at no additional cost to spectators who had tickets to see the CPL game beforehand. For now it’s likely that the aforementioned two stadiums will be the only CPL venues used, with Atletico Ottawa’s TD Place being quite a distance away from League1 Ontario’s current collective of 22 men’s and 20 women’s teams.

Women’s Division To Be Involved

While the first two double-headers born from this collaboration saw teams from the men’s premier division step into Tim Hortons Field and York Lions Stadium, it looks like these double-headers won’t just be a boys club.

We caught up with Dino Rossi to clarify if the women’s premier teams will be involved, and he states that is exactly what is intended. While they don’t have a domestic professional league of their own to mix in with (yet), it looks like fans in Ontario will likely soon be treated to an entertaining league that has seen its top seven teams score a combined 117 goals in its opening month of action.

“I hope it’s the first of many League1 games, including those in the women’s premier division and the reserve competitions, that we host and showcase as doubleheaders this season,” said York United Club President Angus McNab ahead of this past weekend’s double-header.

It’s no secret that League1 Canada aims to replicate the successful formula seen in its existing semi-professional leagues to provinces that still don’t have it, which might one day result in divisions like a League1 Central or the Atlantic come on board.

“The plan is under the League1 Canada banner to create a unity across the country at this level of play,” Rossi told Nef. “Our number one priority is to start looking to create national championships, to create and showcase scouting opportunities to identify players from coast-to-coast, and we want to have more leagues like League1 Ontario, League1 BC, and PLSQ across the country. We need all the parts of the country to be serviced at this level, so there’s a lot of things coming and we’re very excited about what the future holds.”

Given that League1 Ontario and the Canadian Premier League both fall under the Canada Soccer Business umbrella, Ontario’s provincial kickoff to the collaboration is one that makes since. While CSB doesn’t own the likes of PLSQ or League1 BC, it still looks like the organization is keen to help to help nurture those leagues through further collaboration with the growing professional environments springing up from coast-to-coast.

As a result, we might one day see CPL venues utilized to showcase burgeoning semi-professional leagues in other provinces, too.

While it remains to be seen when the next CPL / League1 Ontario double-header will be, it seems to be a winning formula for both parties thus far: it adds more value to a CPL ticket, and brings plenty of additional eyes onto a pro-am league with a high quality of play from athletes who are keen to experience those kind of environments, too.

Given that OneSoccer had tested the waters airing League1 Ontario action back in 2019 – though had run into issues with proper lighting at League1 Ontario venues – these double-headers might open the door to high quality broadcasts, too. The idea of a Mediapro Canada-produced promotion or relegation battle is certainly an entertaining thought, but one that will have to be kept for another day.

For now, the continued growth of domestic football – at least in Ontario – will certainly enjoy a signal boost through these double-headers.