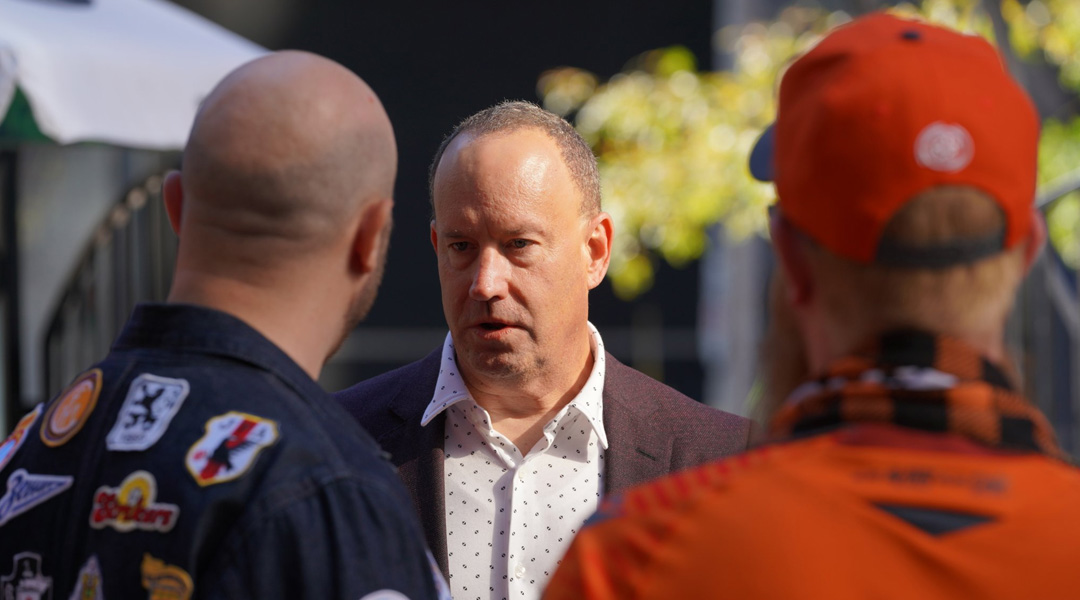 The Canadian Premier League’s new commissioner has teased a major competitive announcement that will be unveiled this weekend.

It may just be Mark Noonan’s third week on the job, but the affable league executive has been busy taking in scenes from around the league, familiarizing himself with a domestic soccer landscape that he hopes to ‘move the needle‘ with.

While much of this will happen at a careful and measured pace, Noonan revealed to TSN 1260 Edmonton that a major competitive announcement was slated for this weekend, where it’ll be announced during the CPL’s match of the week.

The confirmation of such an announcement came on the heel of a discussion about the league’s passionate core base of supporters, many of whom Noonan said wished it was easier to take in away matches and support their team on the road.

“What I’m learning from them is that they’re veracious about the sport, and they want to combine efforts to do things like group travel so they can go to not just their home city, but also travel to other clubs in the league and support them. They’re looking for assistance in that regard,” said Noonan on the radio show.

The commissioner has been meeting a number of those markets, and is set to land in Edmonton this weekend to take in an Al Classico match against Cavalry FC.

“They create an incredible atmosphere at these matches. We value them, we appreciate them, we see them, and we want to continue growing that group,” he continued on the subject.

The Edmonton market is an interesting case study for the new boss, who states that the league got it wrong with things as they stand. While FC Edmonton is stuck running on a minimal budget with the search for a new owner still ongoing, Noonan reaffirmed his belief that the city has plenty of untapped soccer potential.

“We believe in Edmonton as a great market for soccer in this country, and that’s one of the reasons why I’m coming out to the ground this weekend – I want to get on the ground and see it for myself.”

The new boss also emphasized how important infrastructure was to the success of a club, stating that he’s seen some really good facilities around the league, but also some that will need work and investment. Edmonton certainly falls into the latter category.

“We’ll evaluate those one by one as we come into the markets. Having a proper facility to play in that celebrates the sport, where you can properly schedule your matches at times that are convenient for your fans to come to the game, is a really important element to our success and any league’s success. It’s certainly an area that we’re going to be paying a lot of attention to.”

He also gave Alan Koch and the FC Edmonton squad plenty of credit for their competetive nature throughout the difficult season, stating that the team can play a bit of a spoiler for clubs as the regular season comes to a close and playoffs loom. FC Edmonton were the first out of the race, however.

For Noonan, Edmonton just one of many threads to sort in a sporting landscape that proves an incredibly intricate tapestry. Having helped Major League Soccer find its footing in the early days of the league, however, it’s fair to say he’s got the right kind of credentials to help with Canada’s own domestic startup.

His experience in the like didn’t come without making tough calls, however.

Still, he says it would be premature for him to start setting grandiose visions or tough calls before he’s even been able to take in every market with his own eyes. He’ll educate himself first-hand, taking time to do things right before making big actions.

“I’m hoping to take those ideas, blend them with I’m learning, and come up with something that’s very unique to the Canadian market,” he says.

With soccer momentum growing from coast-to-coast as the World Cup looms, there are plenty of prospectors showing interest in the four-year-old league. Noonan says the CPL is in discussions with several groups, though he previously went on record in saying it may be better value for the league to hold off on expansion until after Canada hosts the 2026 World Cup, at which point they can dig for much higher expansion fees.

It’s not the pace that had originally been earmaked by David Clanachan, the league’s first comissioner who left in order to helm his own expansion venture in hometown Windsor.

“Expansion is a high priority for our league, but I’ll say that with a little bit of tempered enthusiasm in that we’re not going to expand until we have all the right conditions to be successful,” says Noonan, who specified that new clubs must have the right facilities, a passionate supporter base, a community keen on soccer, good corporate backing, and a great owner who can invest in the product.

That means that fans will likely need to temper expectations of a gold rush in terms of inbound clubs, though Langley is still set for next year while both Windsor and Saskatoon await firm stadium plans.

In the meantime, this weekend’s major competitive announcement sounds like quite an interesting development, and one that was pitched alongside discussions about supporters hoping to take in some CPL scenery outside of their own stadium.

While what that ultimately means remains to be seen, fans won’t have to wait very long to find out.